A Blast From The Past – Air-cooled Porsche Maintenance 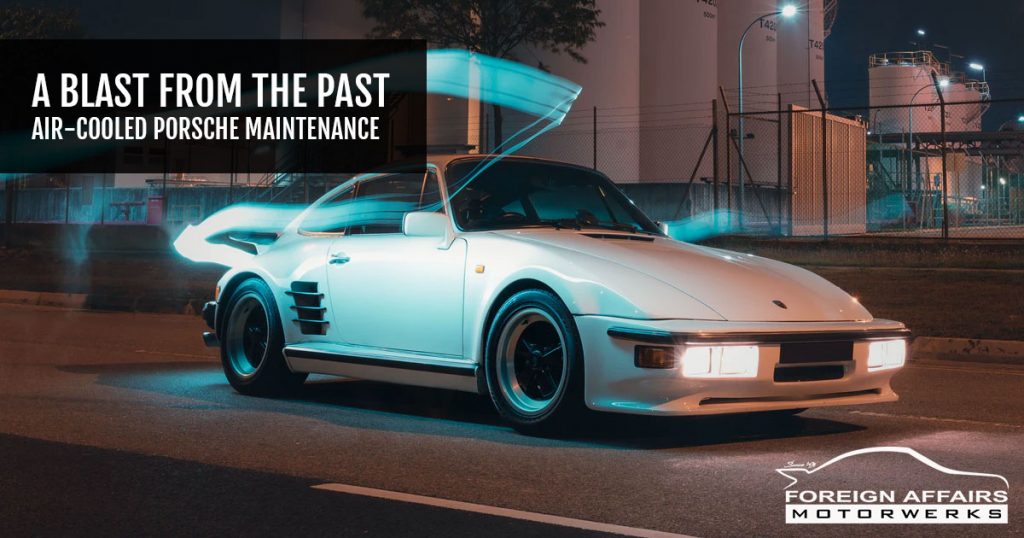 When it comes to history, Porsche have had their fair share of hard knocks and lucky breaks. Whether a hater or fanatic, both agree that this has made them the unique brand which they are today. It also makes Porsche maintenance more like reading a thriller than your workshop manual.

Due to their long relationship with VW, for a very long time all Porsche’s were air cooled. So, we’re going to take this article beneath the hood and analyze the DNA of the two types of engine, then take a quick look at how maintenance differs between the two.

We’re all familiar with air-cooled engines – usually in the form of tiny Japanese (or Chinese) powerplants commonly found in your lawnmower, generator or motorcycle. All internal combustion engines burn fuel to generate energy, and this comes with large amounts of waste heat. If the cylinders weren’t cooled in some fashion they’d soon melt, and the engine would be useless. In a Porsche motor, a large turbo fan forces air over the cylinder walls which are finned to increase their radiant surface area.

The cylinders aren’t the only part of the motor that gets hot, so some method of cooling the rest of the motor had to be devised. The solution was to use the oil which circulates through the motor to cool it. Consequently, the path of the airflow in early Porsche motors is first over the oil cooler, then downwards over the cylinders.

The advantages of this are immediately apparent. There is no need to have water hoses, pumps, and radiators, reducing the cost of the engine. Additional complications associated with leaks and water freezing are eliminated. It also saves weight, the holy grail of the performance world. It was the perfect solution on which the foundations of Porsche were laid. Air-cooled motors are delightfully complex, while being unsophisticated. There is an innate purity to the way they sound.

Most modern vehicles use water to cool the engine. Instead of having finned cylinders, they are encased in a ‘jacket’ of water which is circulated using a pump. Heat is transferred to the water from the block and head, then radiated out of the engine in, you guessed it, the radiator.

Water acts as a natural sound insulator, which is why they are so much quieter than an air-cooled design. As you can imagine, it is much more difficult to keep an exact temperature in an air-cooled engine which often leads to them leaking oil.

Finally, there is the difficult problem of getting adequate cabin heating in air cooled vehicles. A heat exchanger system on the exhaust is used but the tiniest leak can lead to dangerous levels of carbon monoxide building up.

What About Porsche Maintenance?

If you view all we’ve just discussed in the light of servicing, it is clear that air cooled motors require more attention. They need more frequent oil changes, costly leaks often need repairing (some owners give up trying) and due to their large temperature variations, more frequent tuning is required. Air-coolers are like the petulant teenagers of the automotive world. If you fail to give them regular checkups, they may take their revenge by simply catching fire. The cherry on top is that this technology is no longer mainstream, so few shops actually know how to service them properly.

When Porsche started out, VW were building the original Beetle. Air-cooled technology made absolute sense 70 years ago. Porsche refined this, famously keeping it alive way past its prime. Every dog has its day, and Porsche eventually admitted defeat just before the new millennium. Classic air-cooled 911s have seen a boom on the market because of their uniqueness and driving experience (not to mention being a contestant for car of the century). After over 30 years of working on them air-cooled, we feel air-cooled Porsches are no longer teenagers, and at Foreign Affairs Motorwerks, we understand them.