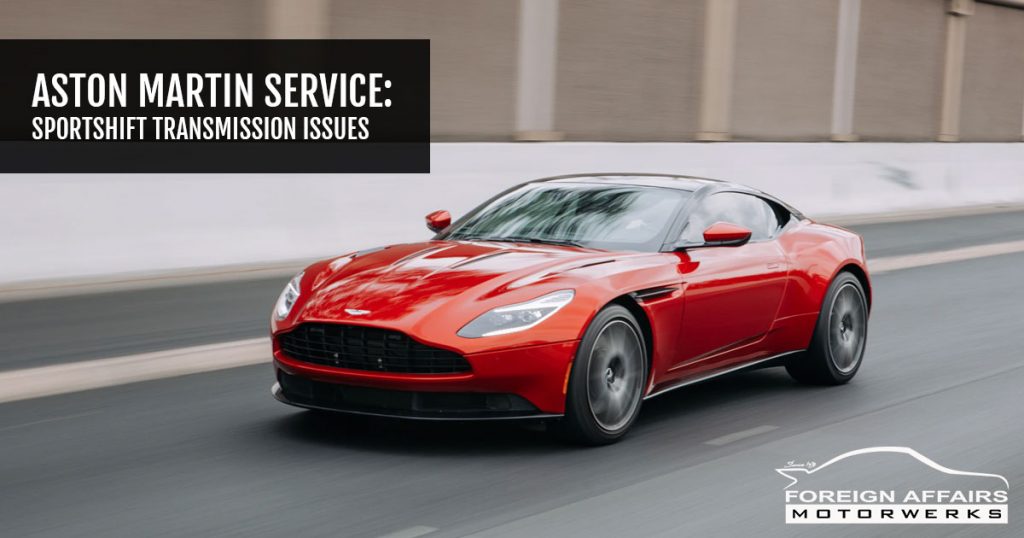 When you think of top automotive British design, Aston Martin is a game leader. Boasting elegant luxury, top performance, and ultra-refinement, Aston Martins are of exceptional quality in every regard. Just like all other luxury performance cars, Aston Martin’s have some unique problems that require addressing from time to time as part of an Aston Martin service schedule. One intermittent issue on certain models is transmission failure. In this article, we’ll be taking a look at Sportshift transmission failure and how to get it sorted out effectively.

Aston’s Sportshift transmission concept has been around for over a decade already. It was designed as a lightweight system that reduces the need for constant clutch engagement. This was achieved by modifying the flywheel and the clutch to allow for smoother and more fluid shifting. The Sportshift transmission was also designed to improve performance and vehicle responsiveness by enhancing torque figures. The aim of all this was to increase driver control, and therefore enhance the overall driving experience.

The main problem is that Sportshift is known to encounter high premature failure rates. This was especially true in certain models such as the V8 Vantage model between 2010 and 2013. The transmission failure rates were so high that Aston Martin issued a global recall on the V8 Vantage. Drivers encountered frequent stalling, where the car would lose most of its performance.

After some troubleshooting, the underlying problem appeared to be a software update issue. More specifically, the issue was found to lie with technicians who hadn’t performed the updates correctly to allow the clutch to be reprogrammed properly. This led to the loss of power and the stalling issue. Although this problem was rectified, Sportshift transmission failure is still a risk for today’s driver. It’s for this reason that investing in an Aston Martin service schedule is a wise move.

How To Prevent Sportshift Failure

If you drive an Aston Martin V8 Vantage manufactured between 2010-2013, it’s recommended to get your transmission inspected regularly. You may not own the V8 Vantage, but if you’re an Aston Martin owner, factory-scheduled maintenance is the best preventative approach to follow. Warning signs of shifting failure include:

Specialized Care Is the Name of The Game

Entrusting your Aston Martin to any mechanic is where problems will begin. A refined breed of vehicles such as an Aston requires a discerning and experienced mechanic who knows the ins and outs of your particular vehicle. Each model requires a specific maintenance protocol that is best followed by a reputable repair facility. A 2017 Vanquish S, for instance, is going to be treated differently than a 1967 DBS. This specialized approach to each car is incredibly important to ensure that they are correctly maintained.

At Foreign Affairs Motorwerks, we treat each Aston Martin as an individual work of art. Our experienced team offers a full maintenance regimen and can assist with whatever your Aston Martin requires. Our specific range of scheduled maintenance packages will ensure that your Aston receives the correct treatment when it’s booked in. Call us today at (954) 746-0488 to speak with any of our knowledgeable staff or to schedule an appointment.