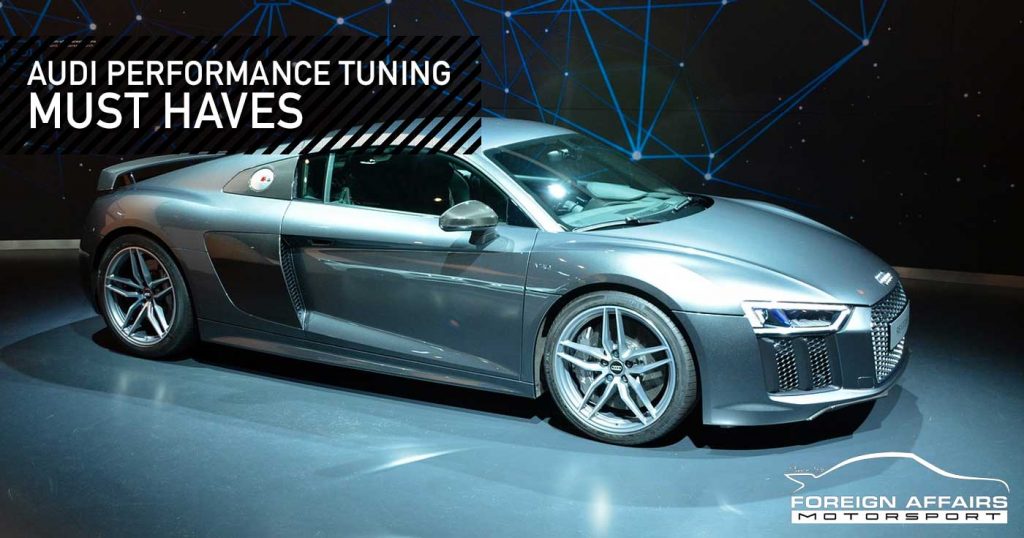 Ever since Audi first came to the US, the four rings have held a reputation for being sporty driver cars. This reputation is carried through every new Audi. So, whether you’ve got a brand new A3, or a classic RS2, here are some clever Audi performance tuning tricks to unlock your Audi’s true potential.

The quickest way to get more power out of your engine is by remapping the ECU. With Volkswagen platform sharing, COBB tuning packages designed for VW’s are fully compatible with your Audi. The quickest and safest way to change your tuning map is with COBB’s Accessport. Accessport allows you to switch between preloaded software maps, such as changing your performance map back to stock, or going into a full track day set up, without the need to perform any modification to your vehicle, and is an absolute must when beginning to tune your vehicle, as custom maps will always ensure you’re getting the most out of your vehicle.

Ever since the success of the UR quattro, every RS Audi has come with their signature quattro all-wheel drive system. Using the quattro systems allow Audi’s to put their power to the ground unlike any of their competitors can. Taking advantage of quattro is one of the smartest things you can do as an Audi driver, and the best way to do this is by upgrading your tires. Having stickier tires, and wider rims allows your car to gain better traction and truly grip the road, letting you accelerate harder, and brake later.

Once your stock engine is performing at maximum output, and all that power is being delivered to the ground, hardware upgrades are the next step, which will take your past the limits set out by Audi. Previously we have addressed upgrades like air intakes, exhaust upgrades and forced induction upgrades, and how these improvements can really give your Audi performance a boost.

Some of the most overlooked upgrades are those that don’t directly increase horsepower and torque, but rather lowers resistance within the engine and drivetrain. We all know that the heavier something is the more you have to work to move it. This is true for your car too. Upgrading your Audi’s flywheel and cam pulleys to lightweight variants, reduce the amount of power consumed to move these parts, and in doing so more power is available to be sent to the wheels. This upgrade has the added benefit of decreasing throttle response time as well as increasing acceleration.

Fitting light weight or carbon fiber rims, relies on the same principle of decreasing resistance. From a standing start, heavier rims consume more power to get them moving. Lighter rims have a lower rolling resistance figure, which means that they begin to roll with far less power being applied. This will not only increase your take off time and acceleration, but it makes braking and cornering easier as there is less weight for you to try and work against.

Audi’s TFSi and TSi engines are designed to return aerated oil from the turbo to the engines head to be burnt off, this is why turbocharged Audis are known to use 1qt of oil every 1000 miles. The down side of this setup is that over time the engines experiences more carbon and sludge build up that robs your car of its powers. While an engine rebuild can return this stolen power, prevention is better than cure. Installing an oil catch can prevents the oil being sent back to engine to be burnt off, but rather redirects this oil to a separate canister where it is collected and can be disposed of safely at a later time, without compromising on the turbo system.

There are tons of other upgrades you can do to your Audi, from flared arches, lightweight body panels and aero parts to further increase your cars performance, but should you need any assistance or advice with tuning your Audi, or any other German car, Foreign Affairs Motorsport’s performance shop pros will be more than happy to advise you on any tuning ideas you may have.