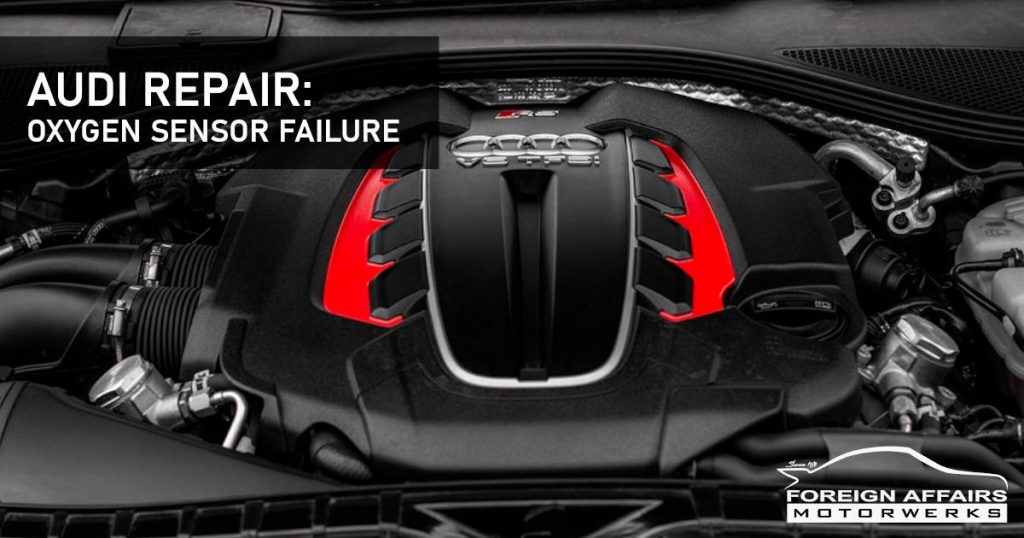 Audi has come a long way since its early days as Auto-Union. Almost bankrupt in the 1960’s, it was bought out by VW who used much of its pioneering research and development in what is now regarded a modern classic, the Golf MK 1. Choosing to integrate the brand into their ecosystem instead of relegating it to the trash can, Audi has come to represent the performance facet of the VW group (aside for Porsche of course, but that is an entirely different debate). Being on the ‘bleeding edge’ of tech isn’t without hiccups, and Audis are often regarded by mechanics with respect bordering on apprehension; they have a name in auto circles for being difficult to repair.

Modern vehicles are very complex and have many systems and subsystems which can fail, but today we are going to take a look at a very common problem that isn’t limited to just Audi repair; the oxygen sensor. Sensors are the eyes and ears of a modern car, and the engine control unit (ECU) relies heavily on their data to ensure that your Audi runs smoothly. There are lots of different types of sensor in a modern car, but oxygen sensors are one of the most critical.

What Is An Oxygen Sensor?

Starting with the clean air act in the 1960’s, vehicle exhaust gas pollution has since come under close scrutiny. Early improvements began with the introduction of a catalytic converters on gasoline vehicles in the 1970s. Following the advent of the transistor and efficient microcomputer-controlled fuel injected engines in the 1980s, a method of analyzing the oxygen content of the exhaust gasses was needed. The efficient burning of all the fuel injected into the engine would prolong the life of the catalytic converter. This gave rise to a small electrical sensor based on a concept called the Nernst Cell that can detect the amount of oxygen present in the exhaust gas.

To function properly, this sensor needs to be heated to at least 600°F. Modern sensors have an electrical heater built into them to bring them up to temperature quickly, whereas older ones relied on the exhaust system to heat them. On your Audi, this sensor is typically screwed into the exhaust system just before the catalytic converter. In terms of Audi repair, it’s a relatively common problem to experience.

What Does An Oxygen Sensor Do?

O2 sensors measure the amount of oxygen in your Audi’s exhaust gas relative to the amount in the atmosphere. They are only used in the ‘closed loop operation’ of the engine; typically, during idle and gentle acceleration.

The ECU uses the data from the O2 sensor to adjust ignition timing and fuel/air ratios. Typically, it is kept about 0.5% leaner of the optimal air-fuel ratio (called stochiometric combustion). The reason for this is to keep any carbon monoxide out of the exhaust emissions. Sensor voltage is typically between 0-0.8v with the ideal setpoint at about 0.45v DC.

How Do I Know My Sensor Is Faulty?

How to Repair a Faulty Audi O2 Sensor?

Some Audi repair shops will remove and clean your O2 sensor, but at Foreign Affairs Motorwerks, we choose to rather replace them. This is because sensors typically have a lifespan of 50-80k miles before the ceramic surfaces inside the stainless-steel guard get damaged and fouled by particulate matter in the exhaust or the heating element fails. Worn or failed engine components can speed up a sensor’s demise by causing coolant or oil leaks into the exhaust system.

At Foreign Affairs Motorwerks, we never get tired of telling clients how important regular maintenance is for your Audi, so if you suspect that your O2 sensor may be failing, why not pop into our Pompano Beach shop for some friendly advice?