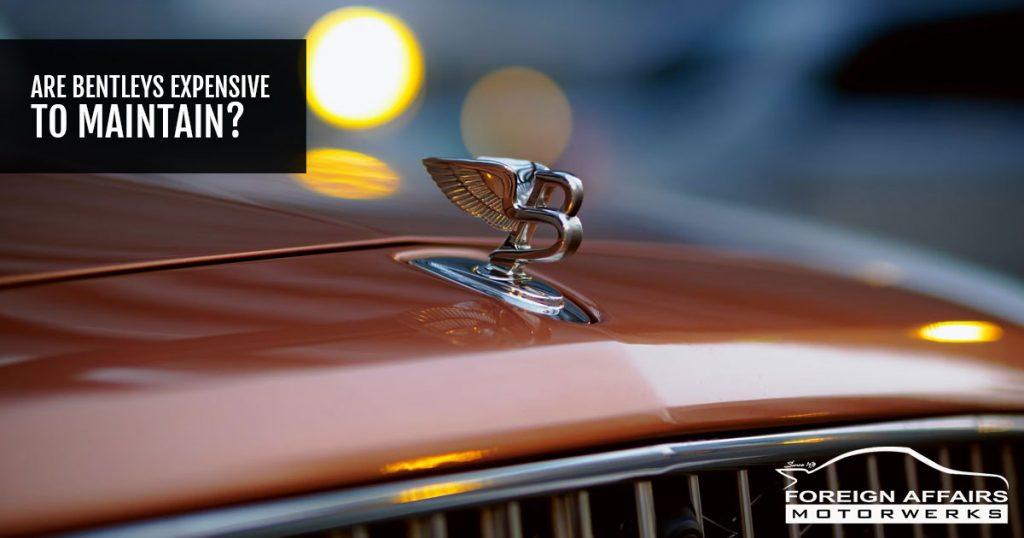 When looking for a luxury car, you can’t really go wrong with a Bentley. Full-sized bodies, powerful engines, top-shelf materials, and a build quality second to none, it’s easy to see why Bentley’s are on so many people’s wish lists. Unfortunately, (or fortunately depending on who you ask) Bentley’s face the same curse of many British marques. That is, they are plagued with depreciation, which has made getting into a Bentley easier than it’s ever been. We get asked this question all the time: Are Bentleys expensive to repair and maintain?The simple answer is, yes. But truthfully, it’s more complicated than that. Here, our Bentley service specialists breakdown Bentley repairs, Bentley maintenance, and the general costs that are associated with owning this posh marque.

The cost of Bentley spares depends on what era your Bentley is from. There are three distinct eras of Bentley. From 1919 to 1931, Bentley Motors Ltd was solely owned and operated by Bentley’s founder, Walter Owen Bentley. The Great Depression greatly reduced the demand for Bentleys, and in 1931 Bentley Motors Ltd failed to pay two separate mortgages which led to the company being sold to Rolls-Royce Limited under the guise of the British Central Equitable Trust.

In 1998, Rolls-Royce and Bentley were sold to Volkswagen AG, with Rolls-Royce later being sold to BMW as VW did not have the rights to use the Rolls-Royce name or logo which still belonged to Rolls-Royce Holdings, the aero-engine division. Volkswagen still owns and operates Bentley today.

The benefit of modern-day Bentley’s is that they are built on Volkswagen’s shared platform system. The Continental GT and Flying spur share the MSB platform with the Porsche Panamera, while the Bentayga shares its MLB Evo platform with the Audi Q5, Q7 and Q8, the Volkswagen Touareg, Porsche Cayenne, and the Lamborghini Urus.

Volkswagen introduced shared platforms amongst its subsidiaries in an effort to improve parts pricing and parts availability by simplifying the production process. Let’s look at the Bentley Continental GT, for example. It’s available in both a 6.0L twin-turbo W12 and a 4.0 twin-turbo V8. The V8 engine is also found in the 971 Porsche Panamera and is based on the naturally aspirated V8 found in older Audi RS models. The W12 used is a refined version of the older W12 found in Audi A8s, which is originally based on the VR6 engine first introduced in the VW Golf Mk3.

What makes Bentleys expensive to maintain and repair isn’t the price of parts, but rather the sheer number of parts found in a Bentley. A Bentley compared to a Volkswagen GTI, has double the number of turbos, double or triple the number of pistons, which require just as many injectors, pistons, and spark plugs. The performance that comes with a Bentley also has a cost. Bigger engines need more oil. More horsepower requires larger wheels to aid in putting that power to the ground, and larger brakes and calipers to bring it to a stop. While Bentley repairs are expensive, in context to how much more car they are, it really isn’t as big a price jump as it should be.

As these cars age, parts become more and more elusive, and with Bentley and Rolls-Royce parting ways, replacement parts just aren’t being reproduced by either brand, making the parts that do exist worth so much more. Fortunately, companies such as Flying Spares have dedicated themselves to sourcing new and used spares, reconditioning these spares, and making sure parts are available for enthusiasts. When it comes to service, it’s best to take your Bentley to either a Bentley or Rolls-Royce specialist, as these cars often feature unique systems that unfamiliar mechanics could ruin.

Pre-War era Bentleys are as expensive to repair as they are to purchase. Since very few cars were produced, and even fewer survived, parts for these cars have become unobtainable, with many owners resorting to having parts custom made to keep their cars running which, as I’m sure you can imagine, is an incredibly expensive process.

The Best Way to Maintain and Repair Your Bentley

As South Florida’s go-to performance, auto repair, and race prep facility, there is no better way to care for your Bentley than to entrust it to one of our highly experienced mechanics. With the latest technologies, familiarity with cars, and attention to detail, we guarantee to be able to help you with any of your Bentley repairs or service needs. Schedule an appointment with a local Bentley service specialist today by calling (954) 746-0488!