Common Audi Transmission Issues (& How To Fix Them) 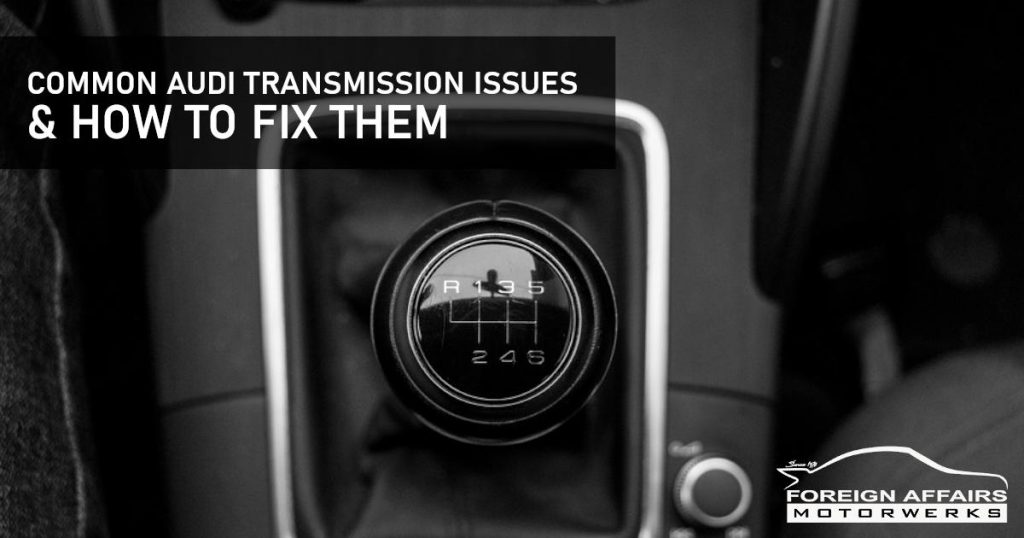 Automatic transmissions are standard equipment on most new vehicles. Unfortunately, they aren’t created equal, and specific models of Audi are known for transmission issues. At Foreign Affairs Motorwerks we did a series of articles on the different kinds of auto transmissions available and how exactly they all work.

Audi chose to fit two of the three main kinds of auto transmission – the DSG (Direct Shift Gearbox) and CVT (Continuously Variable Transmission). While the DSG is the more robust of the two, it is considerably more expensive to produce and is not as efficient in terms of gas mileage. This is why a lot of the A-series Audi’s came fitted with the 01J CVTs, even though they are now discontinued.

Being part of VAG (Volkswagen Audi Group) Audi manufactures some of their own transmissions, and farms the rest out to a major German company called ZF (Zahnradfabrik Friedrichshafen) which basically means ‘toothed wheel factory, Friedrichshafen’ they are a well-known company that produces transmissions for many manufacturers. In this article, we are going to focus on the CVT Audi transmission issues (called the multitronic); what can go wrong with it, and how to fix it.

What Is A CVT Again?

Continuously variable transmissions use a belt-cone principle. The engine output is connected to one cone, while the wheel/s is coupled to the other. The cones are connected to each other via a belt or chain. By moving the one cone relative to the other with a hydraulic mechanism, differing drive ratios can be obtained. This makes for very smooth acceleration; theoretically, there is an infinite number of possible ratios within the range specified by the cone diameters. (In reality, manufacturers often ‘step’ the cones so that specific ratios get selected geometrically.) Unlike a DSG or even an epicyclic transmission, there are no set ratios which means that more wear will be concentrated on the same parts, requiring more maintenance. Additionally, CVTs aren’t as friendly to abuse as a DSG, so if you are looking into buying a CVT vehicle with performance in mind, we suggest looking at alternative models. Let’s take a look at some of the problems your Audi CVT might have:

For transmission issues such as:

It must be pointed out that transmission problems should only be diagnosed as a ‘last resort’ other suspension problems like worn bushes, engine and gearbox mountings and wheel bearings should be checked first.

The Multitronic transmission fitted to many Audi A4 models (after 2001) develops a fault with the forward clutch assembly. The factory clutch system doesn’t have enough holding power for some situations encountered on the road. Audi recommends an upgrade from 6 to 7 friction plates (abrasive surfaces on the clutch) to prevent this from happening. To do this the transmission needs to be removed and a new friction plate assembly fitted. Additionally, the transmission control module needs to have a firmware upgrade to prevent the valve body from selecting the wrong cone ratio and damaging the clutch. We suggest that you trust this modification to a reputable shop; it is costly and needs to be done right.

If your Audi surges under light throttle at low speeds, it can indicate a torque converter issue with the ZF transmission. This will unfortunately require a complete rebuild and torque converter upgrade.

Other issues such as warning lights (often electronic control module or actuator faults) and fluid leaks are also symptoms of a badly maintained transmission or one that has been driven hard. Transmission repairs are costly (on some Audis the engine has to come out first), and it is very important to make sure they are done right. A rebuild by an ASE Certified Shop is a sound investment and will restore your transmission to showroom condition, giving you many more miles of flawless service from your Audi.

Are you having transmission problems with your Audi? Call Foreign Affairs Motorwerks today at 954-746-0488 to schedule an appointment. We’ve been in the business for decades, and with over 125 years of combined experience working on luxury car brands, we’re the best choice you can make.