Engine Maintenance: Get Those Belts Checked 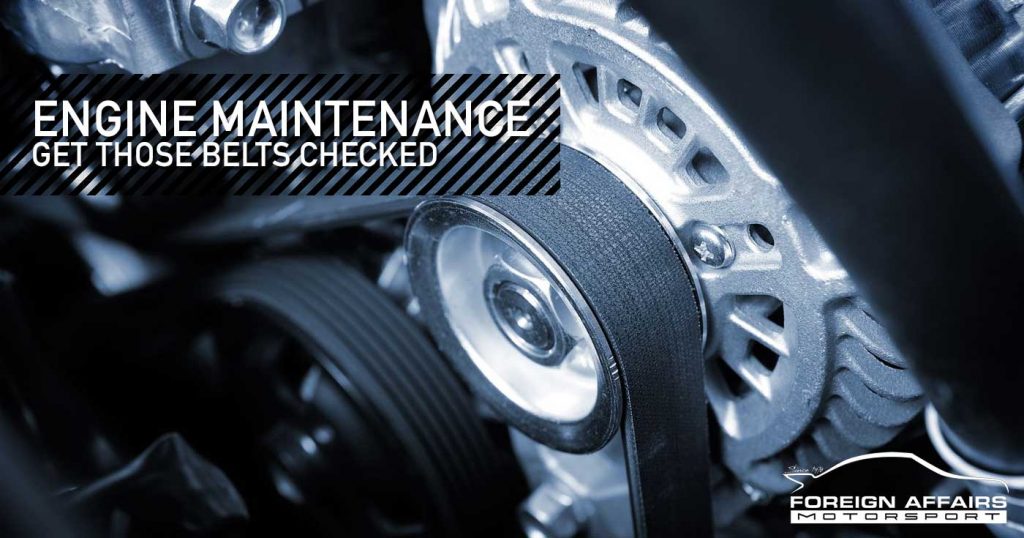 Most of us think of engine maintenance as changing the oil and the filters in your engine. A particularly thorough service might also change spark plugs but given the reliability and expense of these it is usually only done every 18 000 miles. Nobody thinks about belts. Belts were something that made a Model T Ford drive better in reverse right?

True, but modern engines still rely just as heavily on belts. They are the ‘seen and almost never heard’ of components that keep your motor purring. We ask a lot of a modern car. It must generate enough electricity for all of our navigation, climate control, radar safety systems and power steering. It must keep the temperature in the engine and in the cabin at comfortable levels (the Ford Escape recalls are an example). Most of all, it must do this quietly and efficiently.

Because of all of these additional services that the vehicle provides, the engine needs to drive several auxiliary components such as water pumps, air-conditioning compressors, the alternator, injector pump and on some older vehicles a power steering pump. It does this via belts. Older models may have up to three different drive belts for these components, but the modern approach is to cascade all the pumps and drive them via an intricate tensioner loop system commonly referred to as a serpentine belt. Serpentine belts make for a very compact engine configuration and are usually fairly robust; taking a while to fail. However, complete failure can cause the vehicle to overheat, lose steering agility and braking power as well as ignition system failure. Maintaining the condition and correct tension of the belt/s is critical to reliable engine performance

By now we can hear all the auto aficionados saying, “but wait… Surely they’ve forgotten about the cam belt?” Sorry guys, we left the best (worst) to last. Most modern engines have at least one overhead camshaft to actuate the valve train. This is driven from the crankshaft by… If you’re lucky, a chain. Those of us who are not so lucky have a belt (BMW E30 M40 owners, you know what we mean). There are very strict service intervals on this belt, as with many cars having interference engines, failure leads to destruction of the engine. It’s basically Armageddon in your engine with valves smashing into pistons. And as always, repairs after any apocalyptic destruction of this nature are pretty costly and usually your engine needs to be completely rebuilt after a cam belt failure. The default service interval is 4 years or 55 thousand miles, so if you haven’t yet, firstly find out if your vehicle has a belt or chain (chains also have a service interval, but are much more reliable.) If it has a belt, when last have you had it serviced?   ​​​​​​

If you’re an auto enthusiast, it is even more important that you stick to your service intervals, as a well worked engine is more prone to cam belt failure. If all this information seems a little daunting to you why don’t you pop into our Pompano Beach Automotive Repair Shop and chat to an experienced technician? If you are unsure of the last time your belts were properly checked, don’t waste time as a potential failure is a lot more expensive then free advice.