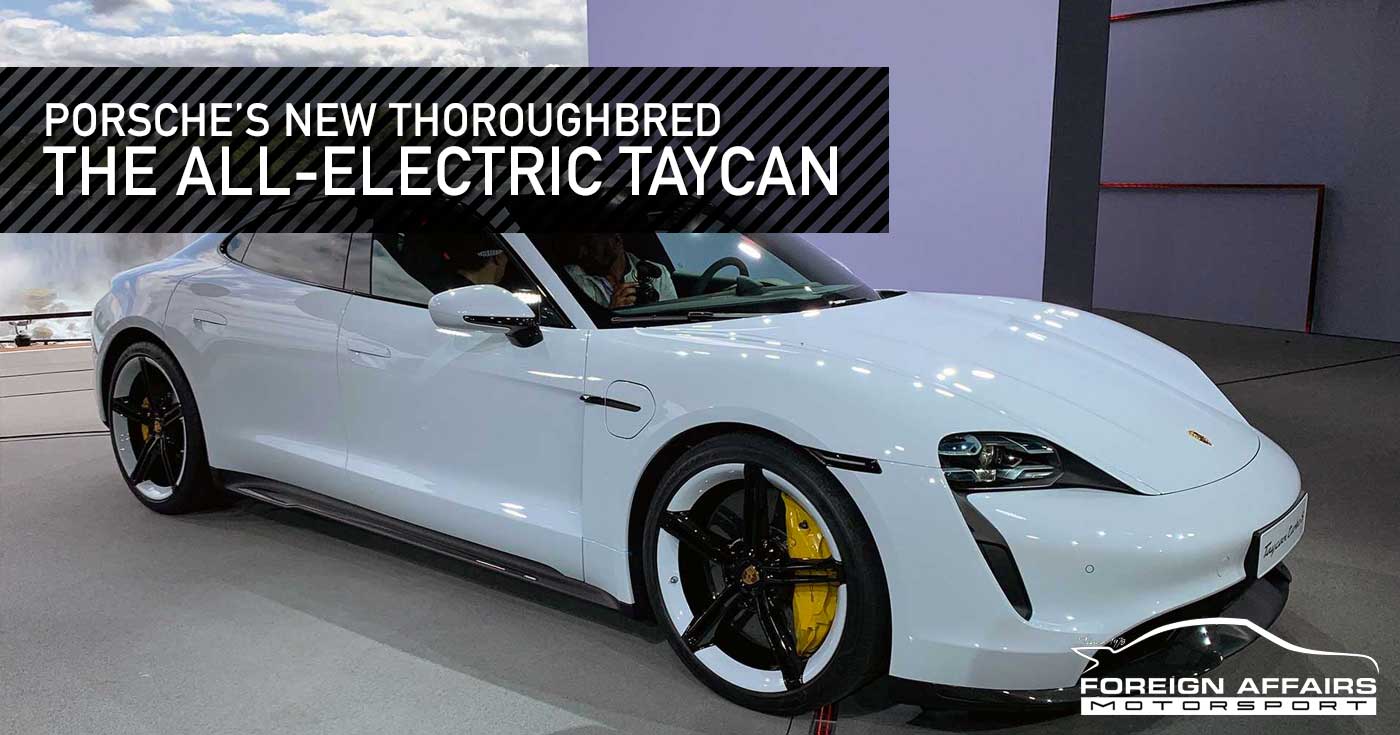 Let’s face it, in the performance car arena, environmentalists aren’t spoiled for choice. Up until recently in the US it was either Tesla, or well, Tesla. Sure, you might be able to import something exotic like a Rimac, but then you’d be stuck without a well-established dealer network or hands-on servicing. So, if you didn’t like the Elon Musk creation, your options were a Prius or Nissan Leaf.

At Foreign Affairs Motorsport, we have always prided ourselves on maintaining and supporting extremely well built offshore marques like BMW or Porsche and we are excited to introduce the green kid on the block: the Porsche Taycan. Named after a young high-spirited horse, the Taycan is Porsche’s grand entrance to the performance electric vehicle segment and what an entrance it is too! Currently, there are only two models available on pre-order.

The Turbo, a slightly slipperier Taycan, drag co-efficient of 0.22 and range of 279 miles or the Turbo S (less under-body paneling resulting in a slightly higher coefficient of 0.25, causing a reduced range of 256 miles. This little thoroughbred is so advanced that we have had to dissect its DNA into three main categories in order to make sure we break it in properly:

Porsche has opted to use a permanent magnet (rotor) synchronous motors placed close to each wheel to give the Taycan its staggering base of 616 horsepower. These aren’t your standard motors though, Porsche engineers have used a stator winding technique called hairpin winding to intensify the electromagnetic field in a smaller space. This saves space, but of course, it costs a little more.

Power is transmitted to the wheels via a single-gear transmission in front and a two speed one at the back. The two speeds are there to provide maximum acceleration (torque) and then once at operating speed, the maximum efficiency. Regulating this power depends on the driver mode that is selected and how heavy you are with the ‘gas.’

For example, in ‘Range’ mode every electron is directed with German efficiency, and only the rear wheel motors are operational. Porsche will also select the longer, more energy-efficient lower gear ratio sooner than for example in a ‘Sport’ mode setting where the Taycan is given free rein to show off its 0-60 mph time of about three seconds!

The Taycan shows its pedigree here.

The body is a complex mixture of aluminum, steel and carbon fiber skillfully joined with a variety of bonding techniques in the ultimate quest to keep weight down to a minimum. For example, the side frame, seat cross members and roof are made from hot-formed steel while the bulkhead is sturdy boron steel which performs excellently in safety crash tests. Putting safety first informs the design and allows Porsche to choose cutting edge materials where it counts. To get a true idea of the exquisite design of the Taycan, why not try the Porsche 360 Degree Experience?

The battery is another area where Porsche’s engineering prowess gets to shine. The Taycan is powered by an unconventional 800-volt battery pack sourced from the technology giant, LG. This battery has a built-in Heating, Cooling, and Ventilation (HVAC) system (since 40% of capacity can be lost to temperature extremes) and optimal charging occurs at a very specific temperature.

What’s so great about all this? In optimal conditions, this system can charge the battery from 5% to 80% in 20 minutes. That’s less time than the average person takes to eat breakfast!

Hang on, if this is so great, why hasn’t Tesla implemented it? Well, it requires a 270 kW DC charging system. Porsche has teamed up with Electrify America (which has 268 charging stations in the US and counting) to give you the first 30 minutes of your charge for the first three years of ownership free! At their new fast-charging systems, you may not even use the full time.

In addition to this, Porsche also has an advanced navigation system called Charge Planner that helps you to select the best charging station, navigates you towards it, and preconditions the battery before arriving. Charge Planner is very advanced; it takes distance, battery conditions, and charge-time into account when selecting the charging station. So, while it may not always choose the closest one, but it will pick the station that will get you back on the road in the least possible time.

With great power comes great responsibility and Porsche has what it takes in the handling arena to justify the Taycan’s Nurburgring record of the quickest four-door electric car around the challenging track.

A three-chamber air suspension is standard, which progressively lowers the height of the Taycan at higher speeds. This is controlled by the Porsche Active Suspension Management (PASM) that has been so successful in the other vehicles in Porsche’s stable. Porsche Dynamic Chassis Control (PDCC) uses the same principle that prevents buildings from falling down during an earthquake to make sure that the Taycan has almost zero body roll. Anti-roll bars are standard on the Turbo, but optional on the Turbo S model.

Braking is done with a mixture of transmission ‘regenerative braking’ and the huge 10 piston calipers and 16.3-inch disks in the front combined with four-piston calipers with 14.3-inch rotors at the rear. There is also an upgrade to larger carbon-ceramic rotors if you feel that the Taycan’s transmission braking figures of up to 221 lb-ft in front and 406 lb-ft at the back alone aren’t enough.

Hopefully, this article shows you why we are so excited about Porsche’s new masterpiece. We haven’t even managed to discuss the optional carbon-fiber interior and sparkling sound systems. The Porsche has shown us with the Taycan that they are clearly ready for the future, and we say, bring it on!