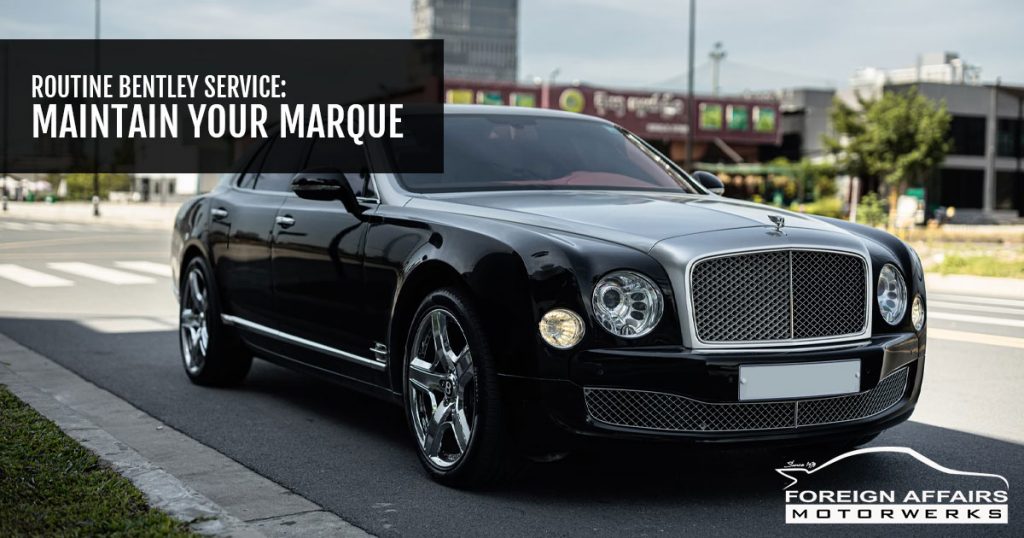 When one thinks of a Bentley motor vehicle, an image of refined luxury and opulence comes to mind. Founded by W.O. Bentley in 1919, he and his ‘Bentley Boys’ crafted a brand that remains an international marque, available only to an exclusive clientele. A Bentley service requires not only skill but specialized diagnostic tools designed to maintain the vehicle to its full majestic quality.

Walter Owen Bentley, or W.O. as he preferred to be known, began his involvement with transportation by experimenting on rebuilding bicycles as a boy, before working on steam locomotives on the Great Northern Railway. He progressed to motorcycles, later teaming up with one of his brothers to import French cars.

A serendipitous discovery of the lightweight properties of aluminum resulted in him creating a new formula for pistons, which translated into creating fighter aircraft engines in the WWI (1914-1918). For his contribution to the war effort, W.O. was awarded an MBE in 1919 and the £8000 from the Commission of Awards allowed him to launch Bentley Motors on July 10 of that year. Bentley cars went on to win the acclaimed Le Mans 24-hour race five times.

The Great Depression that followed the Wall Street Crash of 1929 was instrumental in Rolls- Royce buying out Bentley Motors in 1931. Vickers plc bought out Rolls-Royce in 1980 but made a decision to sell the brand in October 1997. Volkswagen offered the winning bid and remains the owner of the Bentley marque today.

The Bentley marque began with the Blue Train Bentley Speed Six. Racing phenomenon The Bentley Blower, driven by Sir Tim Birkin achieved second place in the French Grand Prix in 1931. The Bentley R-Type Continental, produced between 1952-1955, broke the mold as it could accommodate four passengers and their luggage while achieving 100mph. The Bentley S1 Continental Flying Spur was another limited-edition model, with only 432 cars being built. The Bentley 3 Liter won Bentley Boy John Duff and his co-driver Frank Clement a win at Le Mans in 1924. Only 100 models of the Bentley 8-Liter were produced, between 1930-1932, the second of which was W. O. Bentley’s personal car. Production of the Bentley Mark V was halted by the outbreak of WWII, and only seven remains. Its descendant, the Bentley Mark VI contained the components of the Mark V plus additional engineering adaptations.

More modern iterations of the marque are found in the Bentayga, Flying Spur, Continental, and Mulliner.

Bentley accessories such as tire cradles and battery chargers are available when the vehicle is in storage. To personalize the Bentley experience further, the company has partnered with a number of high-end brands such as Breitling (timepieces), Graf von Faber-Castell (writing implements) Lalique (fragrances), and Professional Golf Europe. The Bentley Home Collection features exclusive handmade furniture, while Bomber Ski features the innovative and limited- edition Centenary and Black Diamond skis. Iconic jewelry is available through the collaboration with Heinz Mayer and sound will never be the same after using Naim and Focal Bentley Radiance headphones. For the ultimate in luxury living, one can purchase an apartment in the Sunny Isles residential tower in Miami, developed by Dezer Development and designed by Sieger Suarez Architects.

As can be expected, a Bentley service is no small matter. Authorized Bentley mechanics such as Foreign Affairs Motorwerks hold their work to exceptionally high standards. Whether a service is performed under factory scheduled or preventative maintenance, the customer can rest assured that all work will be precise and by the book.

Regardless of if the car has been in storage during seasonal changes or used throughout the year, regular Bentley service will ensure that every small but not insignificant detail is attended to. Factory scheduled services may include oil and filter changes, diagnostic testing, checking of brakes, tires, and pressure as well as inspecting and replacing windshield wipers and key fob batteries if necessary. Preventative maintenance may include inspection of belts, brakes, hoses, and, the suspension.

It goes without saying that owning and servicing a Bentley does not come cheap, but as American financier, J.P. Morgan famously said, “If you have to ask how much it costs, you can’t afford it”.

If you’re lucky enough to own one of these luxury supercars, you want to maintain it to the utmost standards. There is a lot riding on your tires. Foreign Affairs Motorwerks has decades of experience servicing luxury marques. Call us at (954) 746-0488 to speak with an ASE-certified mechanic, today.