The Different Types of Automatic Transmissions 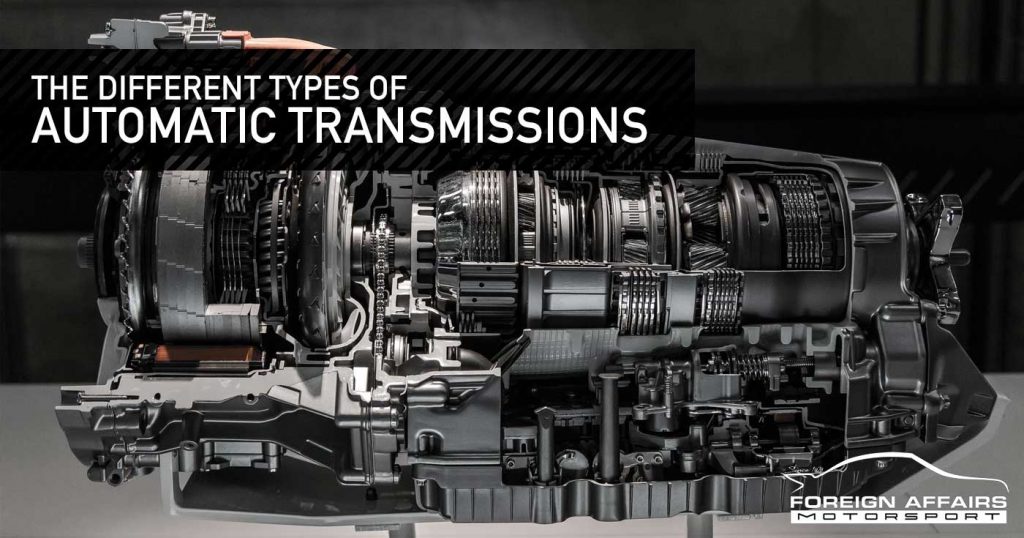 In June, we took a look at maintaining automatic versus the traditional stick shift transmission systems. Besides talking about the major differences between the two biggest transmission categories and their associated history and maintenance schedules, we established that the era of the classic stick shift is over.

Not all automatic transmissions are created equal though. Every manufacturer seems to have a different idea of just how an automatic gear system should work, and we say viva la difference! The three largest categories of automatic transmissions are the twin-clutch type, continually variable ones, and the older fluid coupled systems. In this article we are going to take a detailed look at each type, which makes it better, (or worse) than its competitors, and what typical maintenance is associated with it.

The largest two manufacturers of these are Porsche, with their Porsche Doppel Kupplungs Getriebe (PDK) which translated basically means Porsche dual-clutch system and Volkswagen with their Direct Shift Gearbox or DSG.

Combustion engines have a narrow revolution range in which they perform efficiently, and a transmission’s key job is to try and keep the engine within that range regardless of the speed of the vehicle. Basically, it translates the engine’s narrow range into the wider speed and torque range required by the driver. The traditional system did this with a range of gears in an oil-filled case. The driver would select the appropriate gear, then gradually match the gearbox revolutions with those of the engine via a clutch system that uses a controllable friction force to lock the gearbox input shaft to the engine output one.

The problem with this is that drivers can make errors, (such as selecting the wrong gear or letting the clutch out too fast) and this can result in the engine and or gearbox damage. Also, there is a brief interval between changing gears where the engine is not connected to the wheels, resulting in a loss of precise control and power delivery.

The way the German automotive companies solved this was by adopting the “more is better” approach. Why have one clutch and gear train when you can have two? Why have driver-controlled clutches when you can automate them? By connecting gears one, three and five to one clutch system; gears two, four, and six to another, they seamlessly changed between gears as the road conditions demanded.

The first dual-clutch systems were pioneered by Porsche in the ’80s 962 racing cars, but now can be found in most contemporary Volkswagen and Porsche vehicles. Some are even manufactured for VW by Borg-Warner.

It took about 30 years of refining before the twin-clutch transmission could outstrip the manual in terms of economy and performance. Today? They are very refined and responsive. Unfortunately, they are also maintenance intensive, requiring specialist technicians and regular servicing (every 60,000 miles according to Porsche).

In the performance world, Subaru is the main pioneer of the continuously variable transmission system. A chain is passed between two pulleys which can vary their diameter according to the torque/speed characteristics required. The engine is coupled to one pulley (often via a clutch system,) and the other pulley outputs power to the transfer case or differential. Most systems use some elaboration of this basic principle.

Subaru’s LinearTronic system adds a hydraulic clutch system (torque converter) to lock the transmission to the engine under all driving conditions except coasting or traveling at a slow speed. This allows for better control and efficiency, according to Subaru. They also state that the CVT system oil is good for the system’s “lifetime” but we prefer to at least check it every 60,000 miles. This interval is dependent on your driving style and may it may need changing sooner if you attend track events or frequently tow.

Instead of the conventional mechanical friction clutch systems, a fluid coupled transmission uses a torque converter which is basically two turbines encased in a single housing filled with hydraulic fluid. Between the turbines is a stator which controls the fluid flow and an optional mechanical locking clutch to lock the assembly together when their speeds are roughly equal. Each turbine is given a specific name; the impeller is attached to the engine, and the output to the gearbox is called the turbine.

A torque converter relies on the fluid flow and the design of the stator to transmit torque from the engine-driven impeller to the output turbine. Naturally, some energy is lost to turbulence in the fluid which is dissipated as heat. The turbine connects to a conventional gearbox that has either hydraulic or electro-magnetic ratio selection systems.

As you can see, this system relies heavily on the integrity of the fluid, and since it is continually pumped most torque converters have a filter screen and fluid sump. We recommend that the ATF fluid be changed and the filter cleaned every two years.

There are many different styles of the transmission system and they vary from manufacturer. Transmission failure can be a very expensive repair so it is always best to make sure that yours is running optimally at all times. If you have any questions, why not pop into Foreign Affairs Motorsport shop and compare notes with our experienced technicians?