Why Is My Car Smoking Under The Hood? 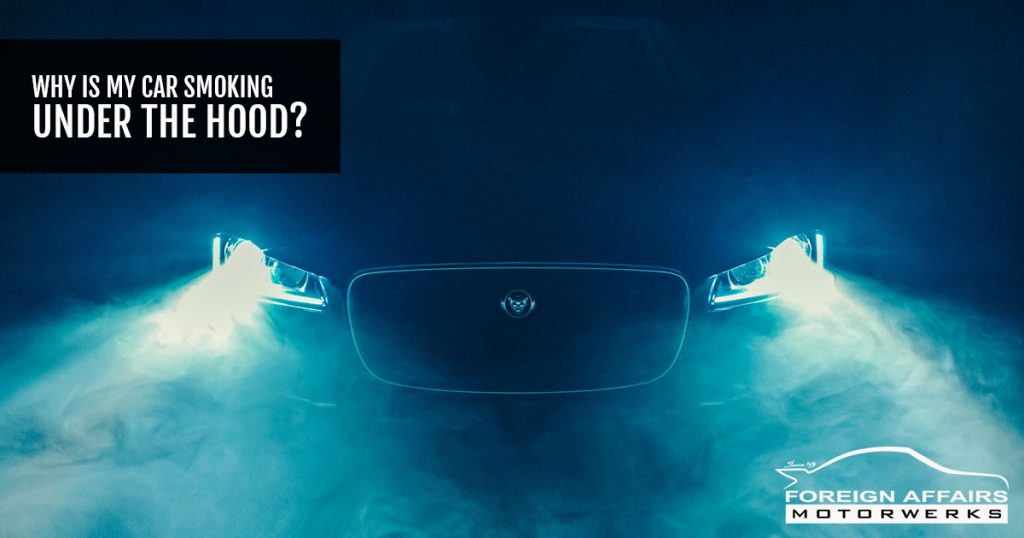 I was driving the other day and noticed someone’scar smoking on the side of the road. The driver cut a very frustrated and sad-looking figure. Fortunately, a tow truck had arrived so they were not alone. It’s difficult to get a mechanic to your car when you’re out and about so getting towed is the better option. I’d hate to think that something similar could happen to me because I had neglected my auto maintenance.

Your car is smoking under the hood because something is wrong! Sometimes the cause can be some spilled lubricants that have gotten onto the exhaust manifold or engine block. If it’s not spillage, the cause can be a lot more serious and will require a mechanic to fix it. Let’s outline some of the more common causes below as well as how to identify the likely source of the smoke.

What Is Causing White, Sweet-smelling Smoke Under The Hood?

The most likely cause of sweet-smelling smoke under the hood is coolant. Since the coolant usually has water mixed with it, the smoke can also contain a bit of steam. When you encounter a coolant leak in your engine, the smoke will be white.

You’ve probably got one of the following problems:

The head gasket is a seal. It keeps the cylinders airtight and stops the coolant and engine oil from mixing. The internal combustion process requires that the cylinders stay airtight. If you check the dipstick or the oil cap, you will see a brownish grease-looking deposit. This is a sure sign that water and oil are mixing. You’ll also notice white smoke coming from the exhaust.

If the head gasket has not gone then there is a chance that the problem lies with the cylinder head block itself. After long periods of overheating, the cylinder head gets warped. This warping means that it loses its shape and can’t make an airtight seal with the engine block. Since the head block is necessary for proper combustion, you may notice that your car is backfiring or missing. Coolant gets out through the gap created by the warping and burns on the engine block.

There are times when the radiator fails and the coolant and water mixture leaks out. It also happens that the hoses connecting the radiator to the engine are cracked and leaking. If you notice any white smoke at all you should ensure that you turn your engine off immediately. A failed cooling system means that your engine will seize up if operated too long. If that happens, you’ll need an engine replacement.

Black Smoke Is Coming From Under The Hood

Black smoke is caused by unburnt fuel. The most common cause of raw and unburnt fuel is a defective fuel delivery system. Older cars make use of a carburetor. The carburetor uses a vortex to mix air and fuel into an atomized gas that will burn in the combustion chambers.

If the carburetor is leaking, the fuel will spill onto the engine and create black smoke. You’ll also be able to smell the gasoline. This could pose a real danger so make sure that you’re taking your older car in for regular auto maintenance.

There could be other problems with your engine such as the fuel management system on fuel-injected motors. In this scenario, you’ll notice black smoke billowing out of your exhaust. You better head over to an auto repair shop like Foreign Affair Motorwerks before a small problem becomes a big one.

Blue smoke means oil! Yip, there’s an oil leak somewhere. What can happen to some unfortunate drivers is that some sloppy work was done when topping up or replacing the oil. Some of the oil gets onto the engine and starts to smoke, causing a terrible stench. While this does not mean your car has an issue, it is annoying. You can get your engine cleaned so that the smoking stops. There can also sometimes be an issue with a damaged transmission vacuum modulator. Thick black smoke will emanate from under the hood when the transmission fluid leaks into the intake manifold.

Ever since 1978, Foreign Affairs Motorwerks has been the premier European auto shop of South Florida. Amy and her team have upheld their quality standards and boast a rich legacy of working with some of motor racing’s great names. If you love your car, and you should, then give us a call at (954) 746-0488. We’ll help you set up an auto maintenance schedule that prolongs your time with your car.