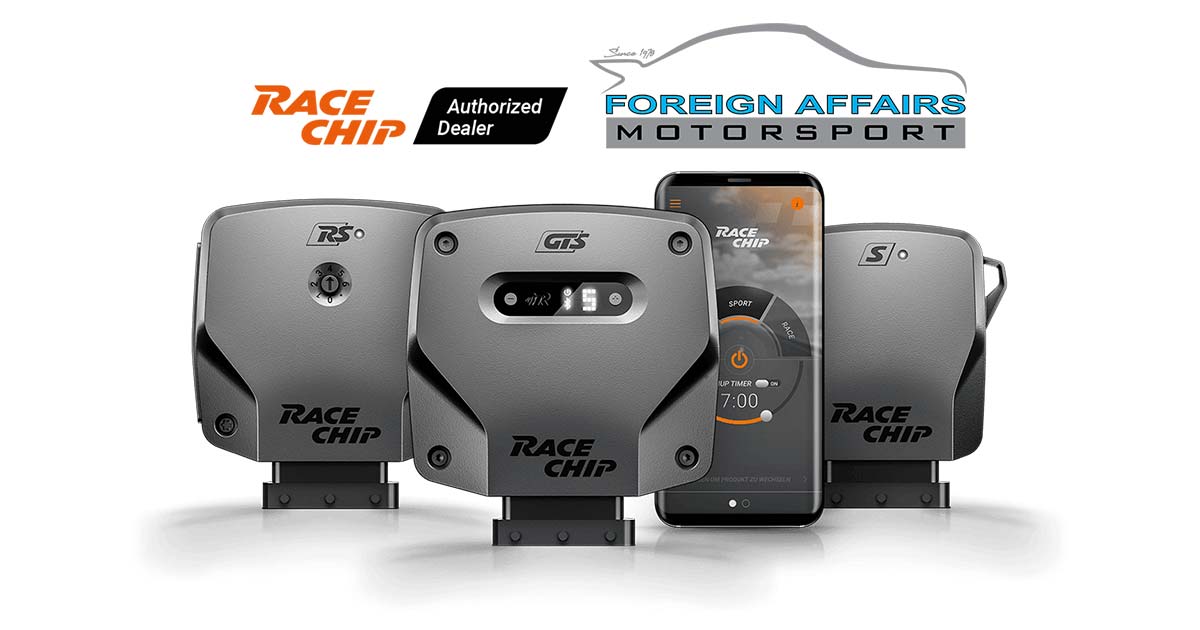 A lot of mathematical formulas are useful but boring. However, this particular formula is powerful and exciting: Foreign Affairs Motorsport is now partnering up with RaceChip, a renowned German ECU tuner specializing in engine management software upgrades.

Yes, this is not just simple math, but reality. Modern engines often have a lot of untapped potential. Why? Because manufacturers often place arbitrary limitations on engine performance using software in the ECU engine control units (i.e. computers or “chips” that run the engine management software). This is done for many reasons, such as over-conservative concerns on reliability, or marketing considerations to neatly fit different levels of performance within a manufacturer’s model lineup.

As such, Foreign Affairs Motorsport is proud to announce having a very affordable yet highly effective solution to this problem. Together, with the latest components from RaceChip and a simple plug-in reflash, Foreign Affairs can remap various engine control parameters and instantly boost engine performance – like magic.

As an added bonus, these ECU upgrade options also boost fuel economy by around 15%.

Best of all, installation does not require any invasive work that voids factory warranties. It is also reversible, allowing the vehicle to return to original factory ECU programming if needed. It really is a very cost-effective and safe way to boost a vehicle’s performance.

The RaceChip upgrades are available through Foreign Affairs Motorsport for a wide range of makes and models – including Porsche, BMW, Mercedes, Audi, VW, and many others.

Any way you look at this, it is definitely a winning formula.

Foreign Affairs Motorsport has been a renowned independent Porsche facility in Pompano Beach servicing Porsche enthusiasts in the southeast U.S. area for more than 40 years.  Their extensive expertise in Porsche vehicles has built up quite a following in the Porsche community and especially in the local Florida PCA (Porsche Club of America) regions.  Over the years, the family-owned business has grown and produced many authentic Porsche performance upgrades, custom builds and restoration projects.

RaceChip was founded in 2008, when Manuel Götz made his passion for automobiles his career. Since then, a continuously growing team of vehicle enthusiasts and engineering fans have worked with passion to develop innovative performance upgrade products at their headquarters in Germany. In 2010, RaceChip began expanding its dealer network beyond Europe. Today, RaceChip can be found on every continent.  From Germany’s Swabian Alb region – the Silicon Valley of the automobile industry – to a global player in just a few years. For more info, please visit www.racechip.us