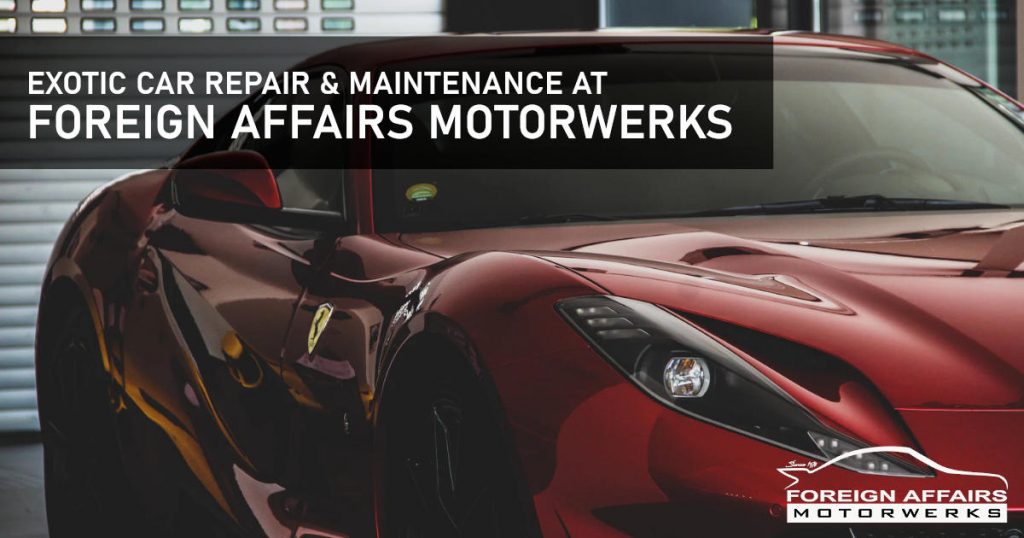 At Foreign Affairs Moterwerks, we’re passionate about servicing and repairing exotic cars. Exotic cars are rare and require specialized service and attention. It’s for this level of quality service that our reputation in South Florida is on the rise. The 1986 Porsche 911 Outlaw and the Nissan R34 GT are just two examples of exotic cars that we have worked on. Here’s a look at some of the legendary exotics that we’re serviced.

Just a warning, you may feel the need to book your exotic car into our service center after you read this.

The Outlaw has our roots all over it. Having been built by our very own technician and racer, Bobby Varela, the Outlaw is an exotic car that stood the test of time. It was a complete custom rebuild that included a new engine, drivetrain, interior, and exterior. It sported iconic fiberglass fenders and Brembo brakes and was an original piece of art in every way. It’s a great example of what an exotic car rebuild can achieve. The attention to detail even reached the seats with 997 GT2 bucket seats being fitted. It’s rare parts like these that a reputable auto repair and race facility can source and integrate into a custom exotic build.

The legendary R34 GTR is the last of the old GTR’s and represents a timeless masterpiece. Boasting the RB-Series straight-6-cylinder engine, Nissan set this engine up to be a tuner’s dream. There are only 18 of these beauties that received additional tuning from Nissan’s tuning arm, NISMO. At Foreign Affairs Moterwerks, we had the privilege of doing some setup work on a white R34 GTR not so long ago. The Nissan Skyline is another rare and exotic model that we can and do work on.

This standout 911 is the ultimate racetrack model which boasts 500hp. That rear wing is massive and boasts a substantial amount of down force. With many carbon fiber body pieces, the GT3 has shed a fair amount of weight. This is not a luxury sports car. It’s designed for the track and performs as such. It’s incredibly stable and planted while still boasting an instant response when you put your foot to the floor. The GT3 is a great example of an exotic car that requires a specialized repair and maintenance program. Factory service schedules make sure that every part of an exotic card is well maintained.

The Audi R8 responds extremely well to an added supercharger. A supercharger kit turns this car into a speed monster by upgrading the V8 to V10 performance. The R8 also sports mods such as air intakes, performance exhaust kits, exterior styling incredibly well. Take Kevin’s VF supercharged V8 R8 that we added some custom mods to recently. From carbon fiber trim options, to air blades, and a massive rear diffuser, there are plenty of aspects that make the R8 V8 an exotic car to crave. The R8 is an accessible sports car that still carries that exotic flair.

At Foreign Affairs Motorwerks, we have been privileged to work on a wide range of exotic cars. From race ready GT3’s, elegant Huracan Lamborghini’s, and even Bentley Ghost’s, you can trust us to perform all repair and maintenance on your exotic car. With over 125 years of combined experience in our workshop, we are fully equipped to work in your European exotic car. Call us today at (954) 746-0488 for your exotic car repair needs.