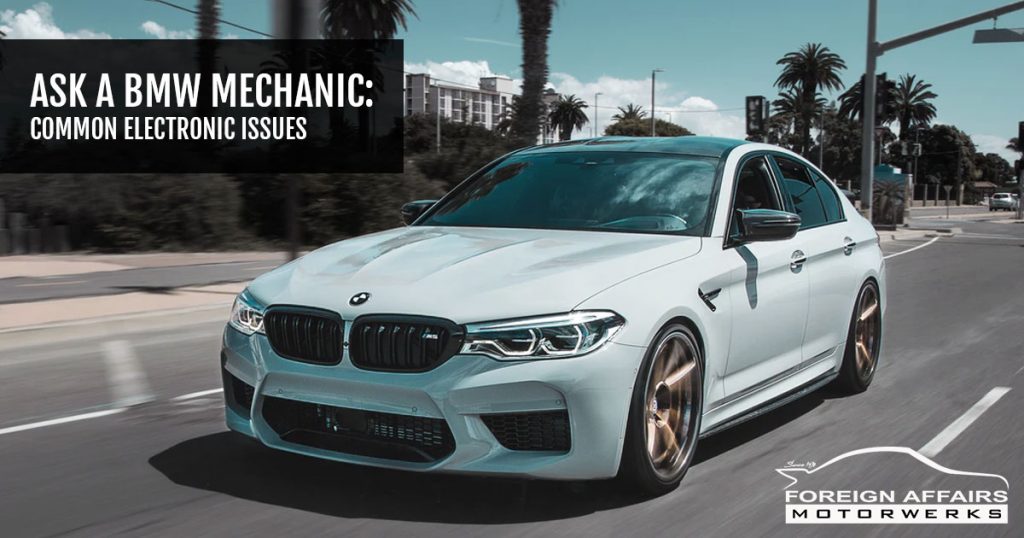 BMW made their name by making vehicles that performed like race cars, while offering levels of luxury to rival Cadillac and Mercedes-Benz. As cars have evolved, so has the amount of technology that people expect to have in a luxury vehicle. But with all this technology, there are more things that can go wrong, which has unfairly given modern BMWs the reputation of being less reliable than their vintage alternatives. We sat down with our BMW mechanics and asked them to share some of the most common electrical issues found on BMWs.

The Most Common Causes Of BMW Electrical Issues

When a BMW drives through our doors, owners will often complain about faulty door locks, unresponsive electric seats, wonky iDrive systems, and general power failures, to name a few. issues There are a few things that can cause issues in your BMW, but before trying to diagnose individual components, it’s important to check these common culprits.

Having a dead battery isn’t an unusual event, and chances are you’ve experienced one at some stage in your life. Most electronics in a BMW are controlled by the car’s CAN-BUS system. The body control module, which is the brains of the CAN-BUS system, is very sensitive in a BMW. Using a battery with low voltage will cause the body control unit to malfunction, causing several electronic issues.

In larger BMWs, such as the 7-Series and E31 8-Series, there are two batteries that work together to power the car’s electronics. If one of these batteries are dead, the entire electronics system becomes underpowered, which causes some components to not receive power at all.

Manufacturers have been using fuses and relays to protect electronics for decades, and a blown fuse or relay will cause a component not to receive power. While fuses may not have blown, it’s important to inspect them, as they can become loose. The points of contact between the fuse and the fuse holder can become corroded or not make good contact with each other. Blown relays may cause large electrical systems like air-conditioning issues.

To make their cars safer, BMW introduced the Battery Safety Terminal (BST), which is designed to disconnect the positive battery terminal in an accident, preventing further damage to the electrical system or an electrical fire. Early versions of this technology were very sensitive, and would disconnect the battery in minor collisions, like hitting a curb or pothole. Since the BST is part of the airbag system, the terminal sensor would need to be replaced to reconnect the battery. A diagnostics tool is needed to clear the airbag warning on the dash.

When a BMW runs into an issue, the body control module will store that code so that when a BMW mechanic runs a diagnostics test, they can easily identify issues to repair. Unfortunately, these stored codes can cause the body control module to operate some components incorrectly. The most common example of this is the steering wheel ELV lock error. When your BMW’s battery is running low, there is not enough voltage to fully retract the steering wheel lock. Even after you have replaced or charged the battery, this error will remain and eventually lock out the steering wheel.

The bright side is that a BMW mechanic can easily resolve this issue. The process of clearing stored faults requires a mechanic to use a BMW OBD2 diagnostics tool, which will read all fault codes and give an option to clear the codes. The car will then be started and allowed to run for several minutes or driven a short distance to see if codes return or not.

Whether your BMW needs repair work, or you want to increase your car’s performance, our certified BMW mechanics and performance shop pros will be able to help you with your needs. For all your automotive needs there’s only one place to go, trust Foreign Affairs Motorwerks, South Florida’s Premier Auto Repair, Performance & Race Facility.