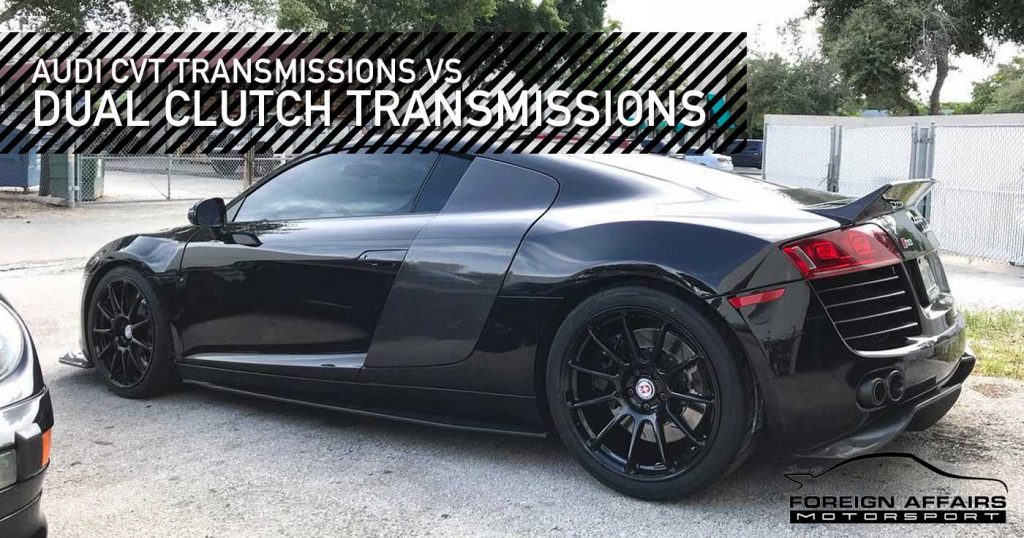 Audi has used two different types of automatic gearboxes in their cars, the Multitronic CVT (Continuous Variable Transmission)  and the S-Tronic Dual Clutch, and even though Audi has chosen to discontinue the CVT transmission for upcoming models, there are plenty of Audis that use the CVT transmission still on the market, both new and used. If you are trying to decide which Audi transmission is better for you, let’s look at how each transmission works.

Benefits of a CVT Transmission

Disadvantage of a CVT Transmission

A dual clutch transmission, as I’m sure you’ve already guessed, has two clutches to manage gears. Clutch A is used on odd numbered gears – first, third, fifth and seventh. Clutch B is used on even numbered gears – second, fourth and sixth. The two clutches are designed to work with each other to make changes between gears smoother and quicker by reducing the time the clutch takes to move from gear to gear.

When you start your car and move it from park to neutral, clutch A prepares first gear and clutch B prepares second gear. When you shift to drive, Clutch A moves first gear into position, and as you begin accelerating, clutch B begins to spin second gear to match the rotational speed of the first gear. When it’s time to gear up, clutch A moves first gear out of position, and clutch B moves second gear into position making the change over from first to second instantaneous. Once second gear is in position, clutch A picks up third gear, and spins it to match the rotational speed of the second gear, and create the same effect for the change from first to second for second to third. This process repeats through all the gear changes.

Benefits of a Dual Clutch Transmission

Disadvantages of a Dual Clutch Transmission

Whether you decide on a dual clutch transmission or a CVT transmission, you can rest your mind in knowing Audi is supplying you with the best transmission for your needs. Should you have questions, are looking to have some work done on your Audi, or have an Audi in need of a new or repaired transmission, please feel free to contact us at Foreign Affairs Motorsport, South Florida’s Premier German Auto Repair, Performance & Race Facility Since 1978.