Did You Know That We Specialize In Lamborghini Maintenance? 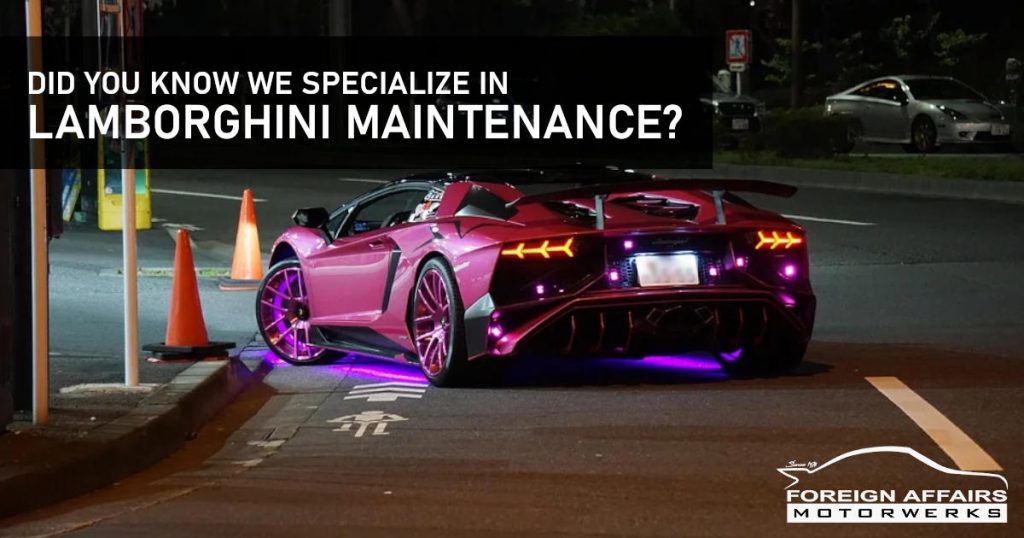 At Foreign Affairs Motorwerks, our performance shop pros have helped us earn the reputation of being the ‘go to’ shop for anything related to your German car.

Unhappy with being the best place for only German cars, we have set out to become the number one service and modification center for all European cars, from Volkswagen and Fiat, all the way to exotics like Lamborghini and Ferrari. You might be skeptical as to why a German specialist can make such an easy transition from maintaining VW’s to tackling something as intimidating as Lamborghini maintenance.

To understand that, we need to discuss a little bit of Lamborghini’s history.

When Ferruccio Lamborghini founded the Lamborghini Brand, his focus was on building tractors, that is until he purchased a Ferrari 250GT.

Ferruccio loved the car so much, he went on to own several more Ferraris over the years, where he famously stated that Ferrari’s were, “repurposed race cars, with poorly built interiors.”

Ferrucio was very vocal about this and discovered that Ferrari’s clutches were inferior to that of their rivals like the Mercedes-Benz 300SL and Jaguar E-Type. This led him to contacting Enzo Ferrari personally.

Ferrari dismissed Lamborghini’s grievances, which urged Lamborghini to modify his own 250 GT to outperform stock versions. Satisfied with his own work, Lamborghini set out to build his own car, a grand tourer that would not only outperformed Ferrari, but had the luxurious interiors and road driving capabilities he craved. From this, Automobili Lamborghini S.p.A. was born.

When Ferruccio retired, he sold off many of his assets with Automobili Lamborghini bouncing around owners and flirting with bankruptcy until the brand was purchased by Volkswagen AG in 1998, where it remains today, under the stewardship of high-performance experts Audi.

The spirit Ferruccio Lamborghini built his cars with, that vision of making cars faster, more luxurious, and better overall than the competition, is still alive in their modern cars. Not only that, it synergizes with Audi’s goals, as Audi’s slogan is “Vorsprung Durch Technik,” which roughly translates to, “ahead due to technology.”

Everybody knows the mid-engined V12 Lamborghinis, the Miura, Countach, Diablo, Murcialago and Aventador, but Audi set out to bring the V12 success to all of Lamborghini’s lineup.

They started with introducing an all new platform with the Gallardo, Lamborghini’s first V10 engine car to replace the discontinued V8 lineup of the Urraco and Silhouette. The Gallardo was a huge sales success for Lamborghini, which comes as no surprise since the majority of Lamborghini’s on the road today are infact, Gallardos.

The development and success of the Gallardo spurred Audi on to bring one of their own prototype supercars, The Le Mans Quattro, to market in the form of the R8, using the Gallardo platform as its base. Today, the second generation R8 and Huracan are built on the same platform and even share engines.

Riding the success of the Gallardo and Huracan, Audi set out to bring back the very rare and often forgotten about, Lamborghini LM002 SUV. Unlike the original LM002 which featured the Countach’s v12, the new Urus SUV shares its platform with the Audi Q8 and Porsche Cayenne, and features Lamborghini’s first ever twin turbo engine, a 4.0 V8.

Owning and maintaining a Lamborghini is no longer as intimidating as it once was with scarce and expensive spares. Modern Lamborghini’s make use of Volkswagen’s MLB platform system which allows for regular availability of spares, as many parts are reused in as many vehicles as possible. The Volkswagen group also understands the importance of classic Lamborghini models, and have helped Lamborghini develop the Polo Storico, a division dedicated to sourcing and faithfully recreating vintage spares from qualified Lamborghini suppliers.

Whether you drive a vintage Countach, a weird and unique Espada, or an Urus, our performance shop pros have perfected the art of maintaining a Lamborghini, and will keep yours running faithfully to Ferrucio Lamborghini vision. If you live in South Florida and need to get your Lamborghini serviced, call our Pompano Beach office at 954-746-0488. Luxury auto care is our business.