Did You Know We Specialize In Exotic Car Repairs? 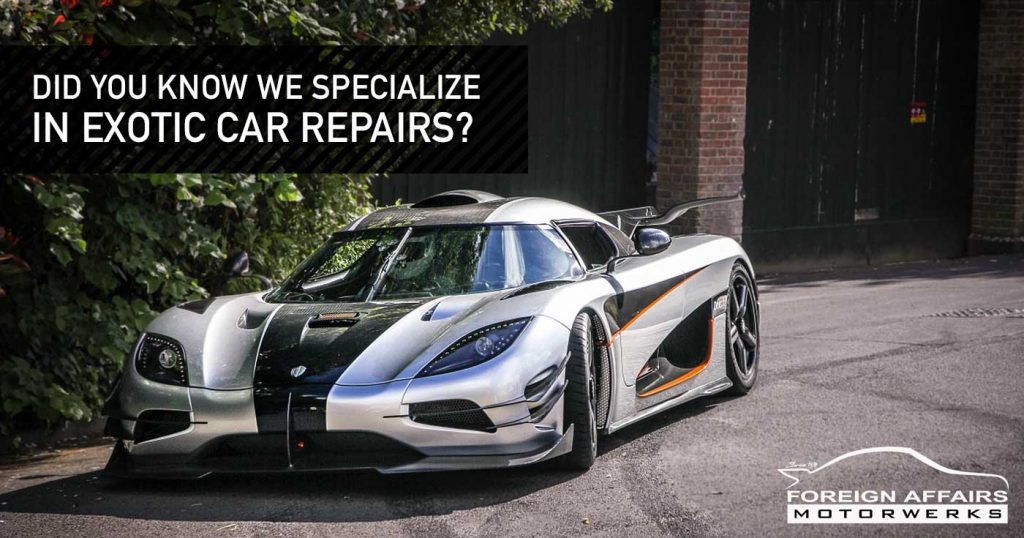 When Foreign Affairs Motorwerks first opened its doors in 1978, we only had one goal in mind, to become the best German car service, repair, and race facility that South Florida and the rest of the United States have ever seen. We have achieved this goal by servicing and building some of the fastest BMWs, Audis, and Porsches in the country. The German car industry has grown since 1978, with brands like Volkswagen Audi purchasing exotic brands like Lamborghini, Bugatti, Ducati, and Bentley, and BMW acquired Rolls-Royce and Mini, we’ve also had to grow. So much so that we are South Florida’s Premiere European and Exotic Car Repair, performance, and race facility.

While our performance shop pros have all the knowledge, we had to make sure they had the correct parts and to do so we’ve partnered with and become suppliers for some of the best OE and aftermarket suppliers around. From suspension to software, we can now source the correct parts for anything from a Volkswagen Golf to a Ferrari 488. Here’s a look at some of our newest parts partners.

As a challenge to ourselves, we took on one of the most insane builds you will ever see, the 1986 Porsche 911 Outlaw. Built by our very own Bobby Varela, the Outlaw was a full ground-up rebuild that features extensive custom work from the engine and driveline to the bodywork and interior, which included custom fiberglass fenders, a Brembo brake upgrade, shorter axles to accommodate Hoosier tires, custom upholstered 997 GT2 bucket seats, and custom ceramic coated engine and exhaust to help dissipate the heat generated by the upgraded engine.

Projects From Around the World

While we are known for working on European made cars, we also work on all luxury car brands – even those in the U.S. and Asia. made We’ve had all kinds of cars come through our doors, from classic Chevrolets to modern legends like Nissans R34 GTR and even rare race cars like the Preston Porsche 935, the only limiting factor to what we can achieve with your car is your own imagination.

Should you be interested in seeing what we’ve done with some of our previous projects, or are curious about how what can be done to your vintage, exotic or modern car feel free to visit our shop in Florida where one of our friendly performance shop pros will be more than happy to help you out, and for all your car exotic car needs look no further than Foreign Affairs Motorwerks, South Florida’s Premier German (and Exotic) Auto Repair, Performance & Race Facility Since 1978!