Experiencing These Suspension Issues? You Need A Bentley Repair 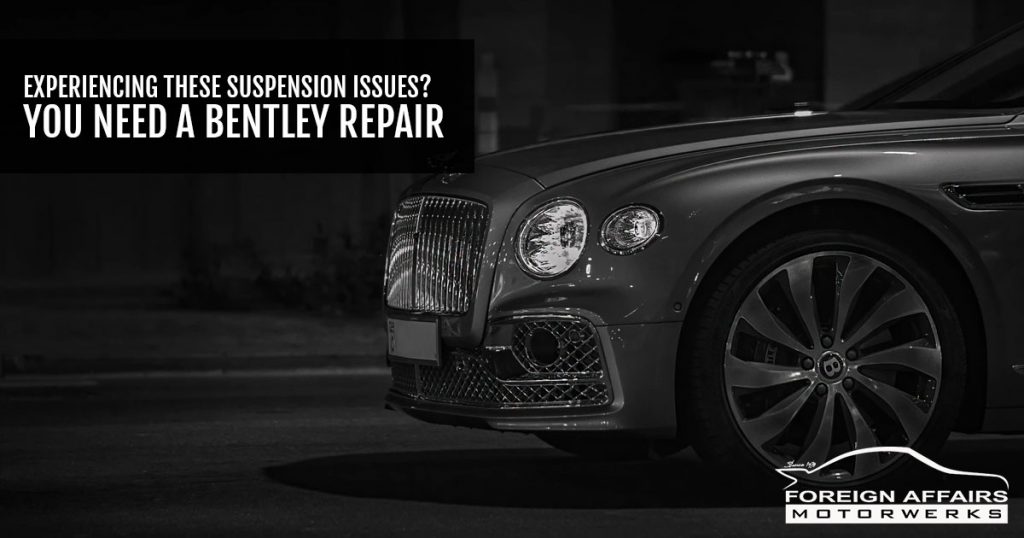 Sixty years ago, the role of a car was simple. It was basic transportation from point A to point B. The engineering design was such that the man in the street could understand and repair it. Basic materials like steel and wood were used. Alas, time waits for no man and neither does progress. Engineering is now a diverse field with specializations that were unheard of scarce 20 years ago. Our vehicles have evolved with us becoming complex synergies of synthetic materials and mathematics. Luxury brands sit at the very pinnacle of this relentless climb with vehicles like Bentley proving very complex to repair.

We could take all day (and some of next week) discussing the different electro-mechanical systems in a Bentley and what it takes to maintain and repair them properly, but we digress. We are going to aim for the biggie, electro-pneumatic suspensions. The only way to achieve the almost magic carpet like ride Bentley owners are accustomed to is by using what is called an active suspension. Here, we discuss some frequently asked questioned around this specific Bentley repair.

How Does The Suspension System Work?

Instead of the usual gas and oil powered struts that most Toyotas have, each wheel of a Bentley Continental is supported by an air strut. Remember the Citroen DS? The car that used to get up off the ground when you started it. Bentley uses a similar technology. Air is compressed either by an engine driven or electrical pump and sent via pneumatic lines to the strut at each wheel. Inside the strut the air is contained using complex rubber seals and its pressure is regulated using electrical solenoid valves actuated by a central suspension computer.

Rubber, unlike a diamond, is not forever. Particularly in the South Florida heat. Eventually the seals inside the struts perish and it can no longer retain its pressure. Once it begins to lose pressure, two things start happening. The computer attempts to compensate by working the compressor harder to supply more air to the problem wheel. When the vehicle goes over a bump, the wear on the seal is exacerbated, and the vehicle may veer or roll badly.

How Can I Tell I Have A Problem?

The most obvious way the fault manifests is if you notice your Bentley looking lopsided after standing the night. If one or more corners of the vehicle are lower than the rest, chances are you’ve got a failed air strut. Less obvious is the ride quality. If it seems to you that the Continental just isn’t swallowing bumps like it used to or has more roll while cornering (like a ship on a rough sea) there could also be a suspension issue. Finally, if you hear a knock from one of the wheels while driving, it is likely that one of the struts has begun to fail.

How Serious Is It?

Your father may tell you anecdotes of when he drove his Honda for 15 years after the McPherson struts went out, but sadly this isn’t the case with a Bentley. The problem with delaying the repair is that the computer system will typically overwork the compressor, causing it to fail prematurely. In addition, since one strut is unable to bear its rated load, the other three need to do more work. Driving a vehicle that could veer unexpectedly could result in a dangerous situation, where you may lose control.

Bentleys are hand crafted, performance machines that live up to their exotic price tag. By looking after your investment with a little preventative maintenance, you can enjoy the limitless performance while saving money in the longer term.

If you’re looking for experienced Bentley repair in South Florida, check out the team of professional Bentley mechanics at Foreign Affairs Motorwerks! Call us today at 954-746-0488 to schedule an appointment.