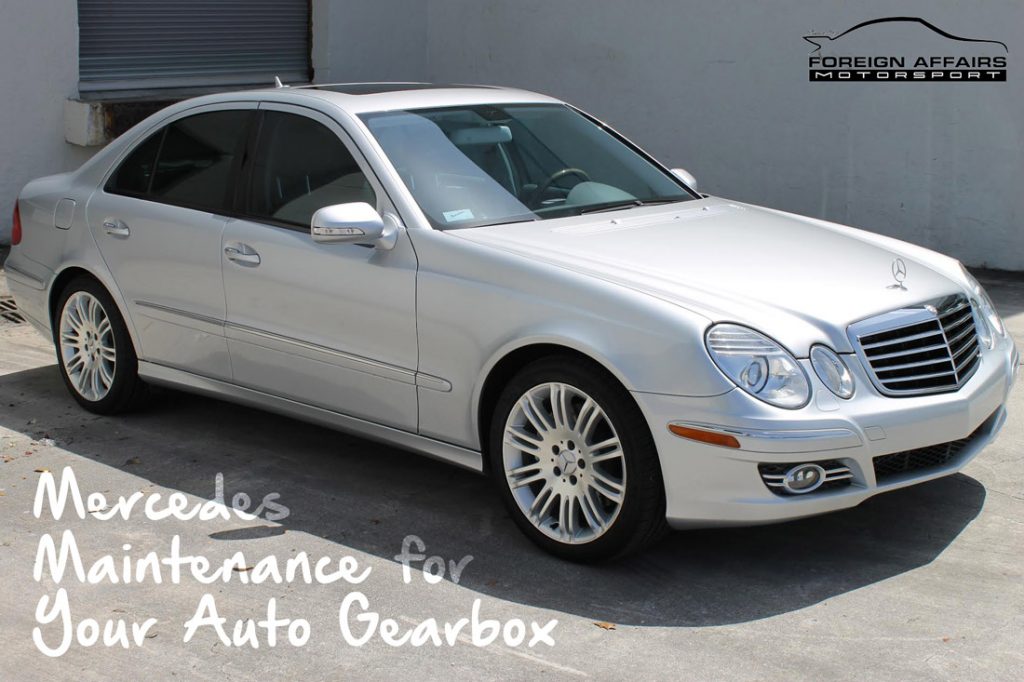 Mercedes Maintenance for Your Auto Gearbox

Thanks largely to the Germans, automatic transmissions are evolving at a rate as rapid as their gear changes, but this also means that BMW, Audi, Porsche, or Mercedes maintenance on these gearboxes has gotten more complicated.

The race for more gears & improved efficiency took another leap over the last year or so when Mercedes began rolling out its new 9G-Tronic automatic transmission. With the USA’s love affair for automatics showing no sign of ending (at last count, just 3.9% of new vehicles sold in the USA were manuals), it’s worth improving your knowledge so you can easily pick up when something isn’t right.

We’re including all transmissions that fall under the ‘automatic’ category in our breakdown, which means we’re taking a look at BMW’s semi-automatic SMG and Audi’s DSG as well.

Mercedes-Benz
One of the most worrying scenarios is having your Mercedes transmission slip into protective ‘limp mode’, where normal performance and transmission function are dramatically reduced. First off, don’t panic! The issue may not be as severe as you think since Mercedes gearboxes rarely require a total replacement. Still, the ‘limp mode’ warning sign shouldn’t be ignored, and could be caused by low fluid levels (you can check yours yourself), defective valve body or conductor plates, or a malfunctioning shifter module. Watch out for Mercedes equipped with Valeo radiators as, in rare cases, water can enter the transmission, potentially causing complete failure.

BMW
While BMW has since replaced its infamous, semi-automatic SMG (Sequential Manual Gearbox) with the excellent M-DCT (Double Clutch Transmission) system, the former was not without its flaws. Although capable of lightening-fast shifts, SMG bugbears include skipped shifts and prohibitively expensive repairs. This is a pity, since these transmissions were fitted to some of the best BMW models ever built, such as the e46 M3. Culprits include the hydraulic pump, the solenoids, and the relays, all of which are prone to failure. BMW’s standard automatics are more robust, but if you own a 3- or 5-Series equipped with the 5-speed ZF gearbox, look out for torque converter delamination, with shuddering or misfiring common at around 25-30 miles per hour.

Audi
Initially dubbed DSG (Direst-Shift Gearbox) and later rebranded as S Tronic, Audi’s dual-clutch transmission is in direct contrast to the brand’s unloved Multitronic Stepless Auto Transmission. DSG’s main issue, especially with initial models, was a delay in power delivery followed by a bang, which caused the cars to lurch forward disconcertingly. Fitting a new Mechatronics unit has worked for many. If you own a DSG-equipped Audi, take an insightful look into how your gearbox actually works.

Porsche
Porsche knows that its cars are expected to endure harsh operating conditions; as such, there are few common complaints related to Porsche automatics, with these components matching the rest of the car for reliability. Of course, you’ll need to watch out for some obvious warning signs, such as slipping gears, especially on older Tiptronics. As with all other automatics, ensure that you change your transmission fluid on time, as low fluid levels can cause many issues. For instance, the Carrera transmission can take about 10 quarts of fluid. If fluid levels are even two quarts too low, the transmission loses optimum lubrication in specific scenarios – an example of this would be slamming on the brakes, sending all the fluid to the front of the car.

The smoothness of your automatic transmission can fool you into a state of complacency, but these are intricate components, and you can avoid spending thousands of dollars on costly repairs by getting any issue checked out as soon as you notice it.