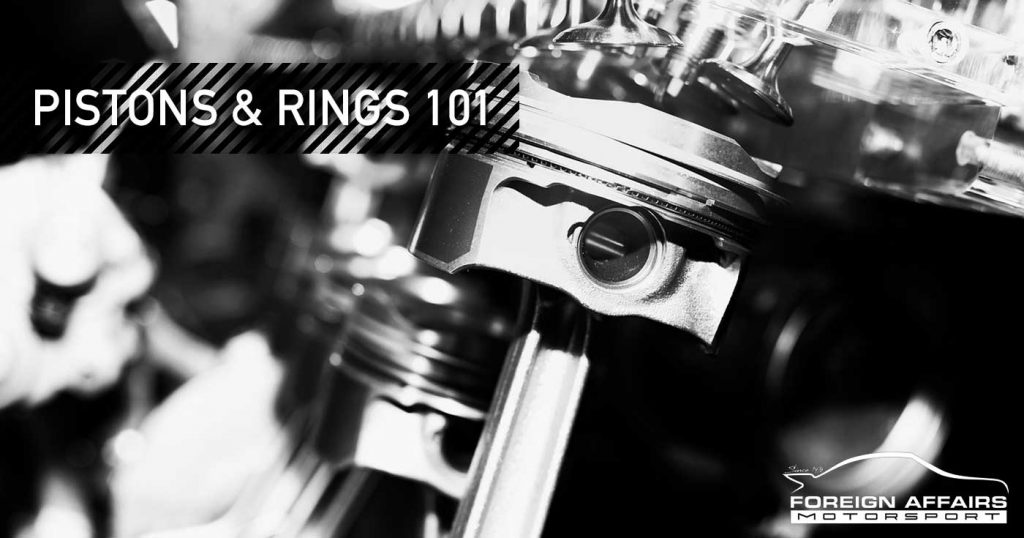 When servicing, modifying, or rebuilding an engine, it’s important to know the purpose of each component. Some of the most frequent questions we are asked is, “why do you need to replace my rings?”, and “do I really need to upgrade my pistons?” So today we thought we’d get our performance shop pros together to discuss the finer details of pistons, rings, and rods.

What is a Piston

When most people think of a piston they think of the full assembly – a metal cylinder with a plate top, and its bottom connected to a metal rod that ends in a loop. While for the large part, this whole assembly can be referred to as a piston, the piston is actually only the metal cylinder on the top. The long metal part that ends in a loop is a connecting rod, and the small engraved channel that runs along the circumference of the piston is where piston rings sit. If you look closer at that engravement and you see a wavy metal part in the channel, you are looking at the piston ring.

What Does Each Part Do?

While the whole assembly’s job is to help rotate the crankshaft, each individual part has its own purpose to perform to get to that point.

While rebuilding an engine, we often recommend replacing the rings, because through regular use, they are constantly being rubbed against the cylinder wall and tend to wear out and allow gases to escape into the crankshaft, which lowers performance. If rings get too worn out, the piston might then sit flush with the cylinder wall, which causes the piston to move side to side and will cause a knocking or rattling sound from the engine.

People looking to get more performance out of their engine may opt for more expensive, but thinner piston rings to lower the resistance in the engine. Piston upgrades could also be used to help cope with the increased amount of pressure a larger turbo or bigger injectors might introduce.

Pistons are generally replaced for three reasons. The first being that they are damaged. Pistons with worn out rings may begin to knock against the cylinder wall and become damaged on the edges. This leaves crowns that are not round enough to properly operate, or that will collide with the valves on the engine during a timing chain or belt failure, causing more damage to the crown.

The second reason is that in some cases when an engine fails, the cylinder wall becomes damaged and is no longer smooth. In these cases, the cylinders can be bored out to make them smooth again, but the piston could then be too small to fit in the cylinder. Rods can also be replaced during this, as in some engine failures, the piston can collide with the engines head. If this collision is violent enough, the piston can hit the head with so much force that the connecting rod is compressed, and is now too short or too fragile to operate to spec.

The third reason is for increased performance. The original pistons are replaced with lighter and stronger variants. In these situations, rods are also replaced. On high performance engines the rod may not be strong enough to cope with the amount of force it undergoes, and rod itself might actually bend, causing misfires and a dead cylinder.

Most stock pistons and rods are made by melting metals and pouring them into casts that, when cool, will create parts in the correct shape. These are called cast internals. These parts are cheap and fast to make, which allows manufacturers to keep up with demand for spares, while making sure factories have sufficient stock. The downside of this process is that when the metal is melted, the atoms rearrange themselves in a random order making the part weaker. To make sure the part won’t fail or expand when introduced to heat, heavy alloys are added to the melted metal.

Forged internals are made by cutting metal, and then heating it and using specialized tools to form the parts into the correct shape. Once the metal is in the correct shape, they are trimmed, ground, and polished into the final piece, ready for your engine. This process is much more time consuming, but creates far stronger parts because the metal atoms retain their natural polarity and structure. Because of this, no heavy alloys need to be added to the part, which means these forged parts are both stronger and lighter. Bear in mind when using forged parts, they do expand more than their cast alternatives and we recommend you get your engine to running temperature before really pushing its limits.

Our Performance shop pros have worked on all kinds of engines, from everyday drivers, to full blown race cars, and will be more than happy to answer all your piston questions, as well as recommend what upgrades will work on your engine. For all your other motorsport queries look no further than Foreign Affairs Motorsport, South Florida’s Premier German Auto Repair, Performance & Race Facility Since 1978.