Tips & Tricks From A Bentley Mechanic 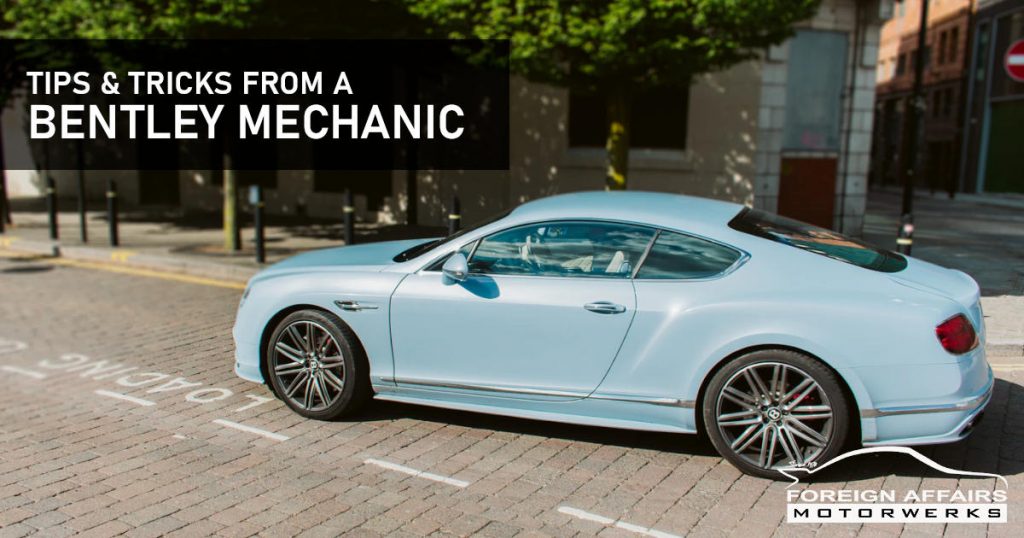 Bentley and Rolls-Royce are well known for being the pinnacle luxury vehicles, which shouldn’t come as a surprise since both brands used to be owned by the same parent company. However, in 1998 both Rolls-Royce Motors and Bentley were sold to the Volkswagen Group. This deal included all the licenses for Bentley’s names and logos but did not include the intellectual property rights for Rolls-Royce, as those were retained by Rolls-Royce PLC, the aerospace division of Rolls-Royce. This prompted Volkswagen to sell off Rolls-Royce motors to BMW and retain Bentley.

Now I’m sure many of you are confused as to why this article has started with a history lesson, but because of the demand for both modern and vintage Bentley, it is important to know when the companies changed hands, and why vintage and modern Bentleys vary so much.

As we’ve just mentioned, Rolls-Royce and Bentley were made side by side from 1931 all the way until 1998, with both companies sharing parts and occasionally chassis with each other. This does limit owners of these vintage cars options when repair work needs to be done, and with neither of the brands current owners offering new parts for pre-1998 models, sourcing the parts can be a nightmare.

Thankfully these cars are still seen as some of the most luxurious and collectable cars in the world and have a strong following. The Rolls-Royce Bentley Specialist Association actively keeps an audited list of international restorers and parts suppliers to ensure that as many original and aftermarket parts are available to owners who keep these amazing vehicles on the road.

When servicing these vintage cars, it’s important to understand what era your vehicle is from, as Rolls-Royce and Bentley have always tried to push the boundary in automotive innovation. Some of the systems they have developed, such as the Bentley Turbo R’s brake system which uses the same mineral oil as the self-leveling suspension system, in place of the standard DOT4 brake fluid, are not used on any other vehicle outside of Bentley and Rolls-Royce. Using the wrong fluids in your Bentley is one of the most common reason for suspension failure and can cost over $20 000 to repair.

Modern Bentleys are still designed and manufactured in a mostly traditional way, with production now being an even split between modern machinery and classic hand-built work. However, Volkswagen dictates that all of their subsidiaries use their base platforms when designing their cars, in an effort to make replacement parts as readily available as standard VW parts, with the only current exceptions being the Porsche Taycan, Lamborghini Aventadore, and the Bugatti Chiron.

This means your Bentley shares parts with not only Volkswagen and Audi, but also higher end brands like Porsche, Bugatti and Lamborghini. For example, the current generation Flying Spur shares its platform with the Continental GT and the Porsche Panemera, with the Bentayga sharing a platform with the Porsche Cayenne, Lamborghini Urus and VW Touareg, with only the higher end variants getting unique engines such as Bentley’s W12.

On the note of Bentley’s W12, a little-known fact is that the W12’s architecture is based on that of two Volkswagen VR6 (or staggered 6) engines that have been joined at the crank. Volkswagen has used the VR6 in multiple cars from the Golf R32, to the Cayenne and has been used in early versions of the W12 both the VW Phaeton and Audi A8L. The benefit to Bentley owners is that with the huge amount of both stock replacement and aftermarket performance parts, Bentley owners are spoiled for choice when it comes to repair parts and performance upgrades. Such an upgrade would be like APR’s performance package for the VAG 4.0 tfsi v8 engine, which is an engine option for the Continental GT, and is also found is Audi’s RS7, which can be fitted by a reputable VW, Audi or Porsche service center.

You will be hard pressed to find a more reputable VW, BMW, Bentley and Rolls-Royce service center than Foreign Affairs Motorwerks. Whether you’re looking to track prep your modern Bentley, or just want to keep your vintage Bentley in concourse condition, our performance shop pros can handle any task your car can throw at them, while maintaining the utmost care you’d expect from a Bentley Specialist. Call us today at 954-746-0488.