Vehicle Customization – Ramp Up Your Audio 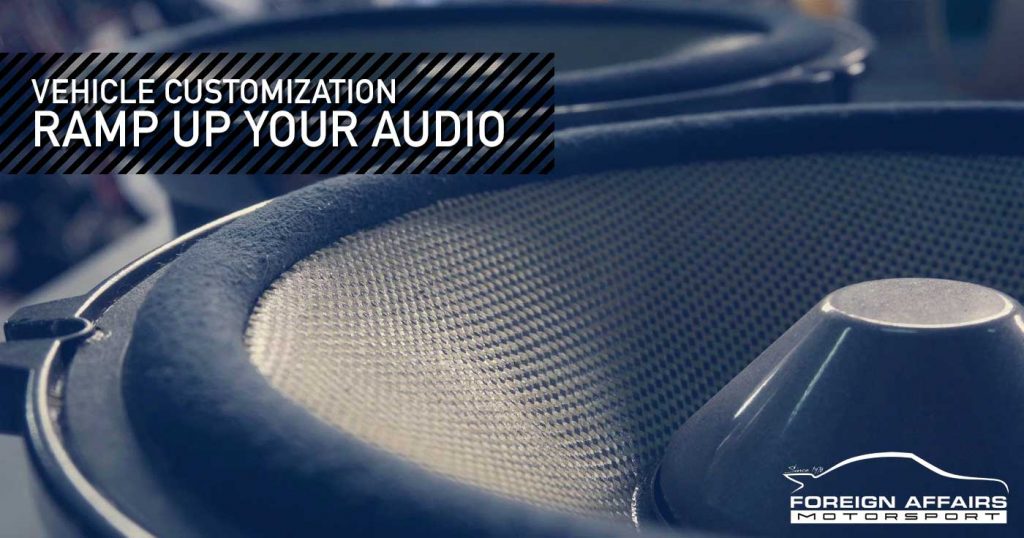 Nothing beats the sound of a well-tuned engine dancing through the rev range, but your car’s engine shouldn’t be the only thing you hear when you go for a drive–that is until you decide to close your windows, put on your favorite playlist, and that very same engine sound becomes a nuisance. While huge subwoofers and amplifiers are the go-to for some, we have found the best audio upgrades you can do to improve your sound experience.

Cars are noisy machines, and even if yours isn’t, chances are the cars around you are. The first step in improving your audio experience is by having sound-deadening panels installed. The majority of cars come equipped with some sort of sound-deadening and insulation from the factory, with only the most extreme of super cars opting to get rid of it in favor of weight reduction. It is usually attached to interior panels and not the car itself, leaving areas where there is nothing to absorb the vibrations of your car.

Having aftermarket sound-deadening fitted to your car has two major benefits. First, it acts as a layer of sound-proofing, which helps dampen the volume of sounds from outside the car, while creating a layer between the car’s metal chassis and interior trim that helps reduce rattles. The second benefit is that when used on a speaker enclosure, it helps channel the sound towards the car’s interior, keeping the pressure generated by the speaker localized, giving you a clearer and louder sound from your speakers and effectively raising its sound pressure level (SPL) rating.

Before looking at your bigger speakers, amplifiers, and head units, it’s important to make sure your car’s electrical system can handle the load. Your audio installer will be able to advise you on just how much extra power your stock battery and alternator can handle, but your car’s cabling may not be able to, causing your audio to cut, your headlights to dim, or even create unwanted interference that will affect your sound quality

The “big three upgrade” is where the three most important cables in your car are upgraded to a better-quality cable with a larger diameter gauge. The first cable is the cable running between your car’s alternator and the positive terminal of the battery. This upgrade ensures that your car’s battery receives all the power that is generated by the alternator to improve the efficiency at which the battery charges.

The second cable is the cable that runs from the negative terminal of the battery to the car’s chassis which is ground. Similarly, the third upgrade is on the cable running from the engines ground to the car’s chassis. In both these cases, the upgrade is done to ensure that the alternator and battery are sufficiently grounded to eliminate interference and prevent any short circuits.

Your car’s stereo has a more important job than just receiving radio signals and transmitting your media. Inside of every stereo is an amplifier which powers your speakers. Over time, stereos may blow capacitors or have corrosion build-up on its copper components which lowers its ability to amplify the signals sent to the speakers. Aftermarket radios tend to have larger amplifiers with more outputs, which allows you to get improved performance out of your stock speakers, but also wire up additional speakers on their own channels.

On newer cars, such as Audi’s equipped with the virtual cockpit stereo, the head unit is such an integral part of the car’s electronic system that it cannot simply be replaced. In these instances, manufacturers have begun to work with car companies to create aftermarket alternatives that work with the existing electronics instead of replacing it, such as the Alpine 8V A3 sound system, which includes an amplifier which gives you your additional channels, with speakers that keep the cars OEM look.

Finally, you can shop for new speakers. Call your local dealer to find out what the stock wattage of your speakers are. Armed with this knowledge, you can then begin to shop for speakers with a higher power rating that will give you the increased volume and quality you’re looking for. It’s important to try and keep to speakers that have the same diameter and depth of your stock speakers, to ensure they’ll fit in your car without the need for custom fabrication.

Should you have any questions about upgrading your cars audio, or if you’re looking to upgrade any other part of your car, look no further than Foreign Affairs Motorsport!