You Found What? A Mechanic On Crazy Things Found In Cars 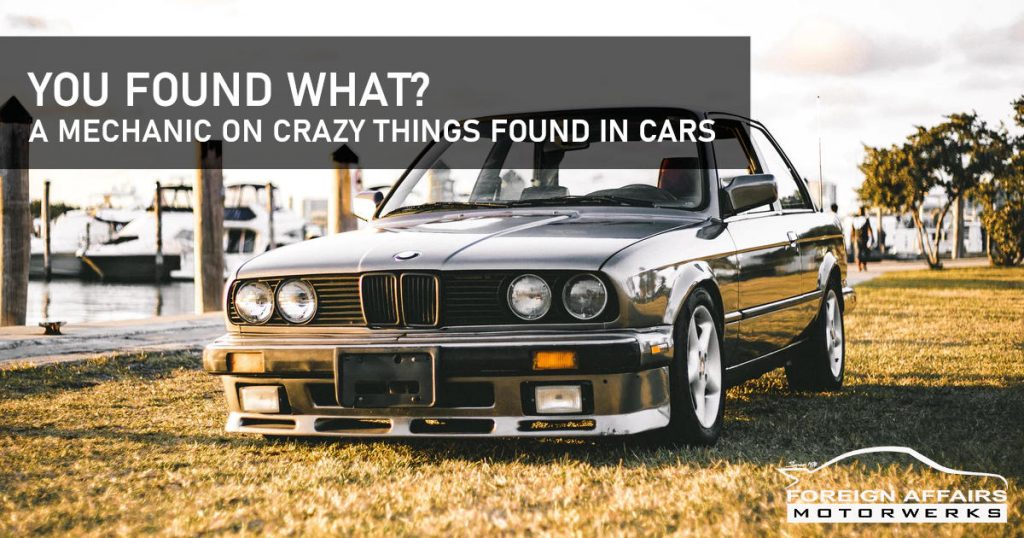 Being an auto mechanic isn’t always easy, but sometimes it’s downright entertaining! Most industries have seen their fair share of strange and things while carrying out a car repair job, sometimes on a daily basis. Auto technicians around the world have come across some mind-boggling things when servicing cars. From peculiar food smells, to animals in hiding, get a load of these stories!

A mechanic had an awkward encounter when he opened up the hood of a car to find a mouse holding on to the upper radiator hose. He seemed to have been attracted to the taste of antifreeze which was fatal. He was caught in the act but couldn’t stick around long enough for there to be a relevant explanation.

The amount of times customers have come to mechanics complaining of hearing strange sounds while they’re in their car is astounding. No doubt the first thing a car owner thinks is that there’s something wrong with the engine or their wheels. Not many stop to check that there might be a stray bowling ball rolling around or a cowbell attached to the bottom of their car.

A customer went to a mechanic shop complaining of what sounded like someone laughing whenever he started the engine. In the end, and after some time searching for a problem with no evidence of a problem, the mechanic found a business card trapped in the AC vent on the passenger side that was flapping around when the car was started, and the AC was on.

A story from back in the day; a customer went to his local mechanic mentioning a sound that seemed to only appear sometimes. Specifically, when he was reversing out of his driveway. His car was new which meant this wasn’t a comfortable sound to be hearing. After the mechanic spent some time trying to figure out what the problem could be, as he was driving the car back to its owner, he came to a steep hill that seemed to exasperate the loud clunking sound. He removed the door in order to locate where the sound had some from and found a glass soda pop bottle. It’s thought that an assembly line worker might have left it behind when building the car in the factory. l. It was empty of course. Oops. That might have remained a mystery had it not been for the steep hill.

A Los Angeles mechanic stumbled across a dismayed squirrels acorn stash. After removing the bumper of a car to install a parking sensor, he found a large number of acorns. As he continued, he found a further hoard of acorns in the glove compartment. At this point he and the squirrel came face-to-face. Let’s just say that the squirrel couldn’t have been very impressed.

A customer approached a mechanic about a heavy clunking sound in his car whenever he hit the brakes. He’d hear a similar sound when pulling away and couldn’t quite put his finger on it. It turns out there was a bowling ball rolling around in the trunk. Why he never stopped to check if there was anything loose rolling around, we’ll never know.

You might have heard about snakes found comfortably nesting a car’s engine, but it doesn’t make this a lesser crazy thing to find, especially when you catch a rattlesnake giving birth.

A mechanic in Arizona interrupted a Western diamondback rattlesnake birthing six babies under the hood of a car. The customer had left her car parked for an extended period of time while away on business. She left the mechanic a nice tip to compensate for the experience. The worst part of this experience was that when she brought her car in for another service, the poor mechanic was greeted by another snake!

There’s nothing worse than an assault to the nostrils after finding old food stashed in a car that’s been baking in the sun on a daily basis. A Tesla Motors mechanic came across something fishy when working on a customer’s transmission. He later found a pile of fish heads sitting on the backseat in the summer sun.

Another mechanic found cereal stuck to the cabin filter. How it got there, we can’t quite explain.

On a rare occasion, a mechanic in Massachusetts routinely worked on a vehicle that housed stolen candy bars, half eaten pizza sleeves and other snacks under the hood. The customer apparently lived in a community that was known for having a large population of rats in the area.

Over the span of a weekend, it became apparent that a customer had left half a plastic-wrapped watermelon baking on the backseat in the height of summer. It was only discovered after the watermelon had been reduced to a brown, slimy blob on the backseat and a terrible smell.

The customer of a mechanic brought her car over for a service with the engine, battery, hoses and wires completely wrapped in tin foil. The customer explained herself saying she was attempting to prevent the government from tapping into her behavior and movements, arguing that if foil helped to block out the government from accessing what you’re thinking, then this must help too. We think she should have rather just paid her taxes–Never a dull day in the mechanic industry!

Looking For A Reputable Mechanic In Pompano Beach?

At Foreign Affairs Motorwerks, we’re no stranger to strange things in cars and we’re always here to help with any issue you may have. Odd noises? Jerky movements? Electrical problems? Our team of professional mechanics service it all. Call us today at 954-746-0488 to learn more about all the auto services we offer.