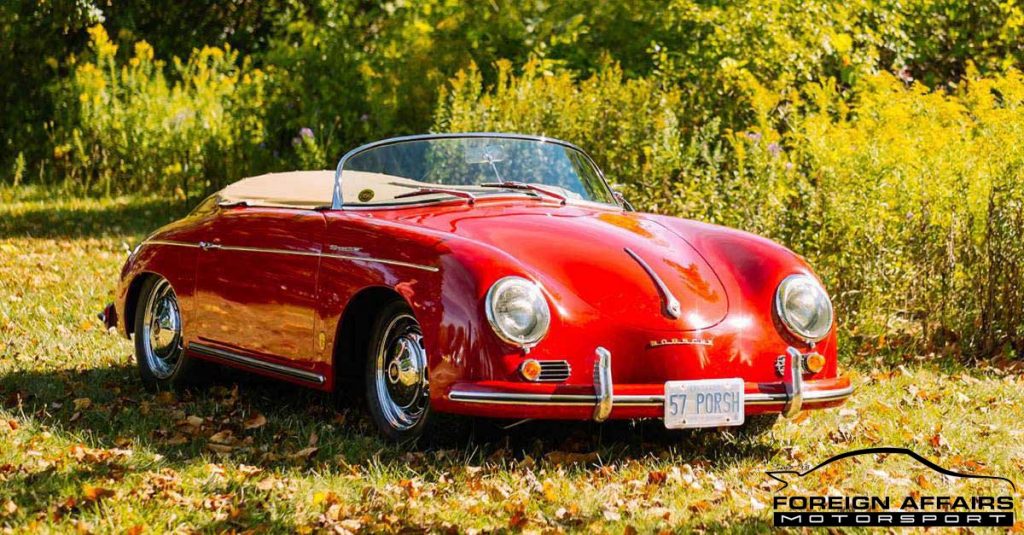 Porsche have brought out some amazing models over the past 70 years. From the state of the art Porsche performance to their very specific styling, the Porsche brand has been desired by many people throughout the world. Join us as we feature some of the most iconic Porsche models that have each played a role in helping to make the Porsche brand truly remarkable.

The 356 was the first car to ever have the honor of bearing the Porsche name. Registered on June 8th, 1948, the 356 marked the beginning of the Porsche brand. The Porsche 356 was a lightweight, rear engine sports car that began as a coupe but was quickly transformed into an open top model that remained in production until 1964. The 356 introduced the basic template onto which future Porsche would be based upon. The 356 boasted many different variations over its life span, all of which helped to put Porsche on the map as a serious sports car producer.

Bring on pure Porsche performance. The 911 was birthed around the same time as the end of the 356’s production and largely became 356’s successor. Debuting at the Paris Motor Show in 1964 – the 911 was a two-door, high performance sports car. Produced in Germany, the 911 boasted a rear-mounted, 6-cylinder engine which packed in the power. This Porsche 911 engine became the foundation on which future Porsche turbo-charged engines would be built upon. At first, the original 911 engine featured a small 148hp, but this was only the beginning of the 911 range. With its famous ‘bathtub’ styling, the Porsche 911 range boasted models such as the 911 Carrera, the 911 Turbo, the 911 GTS, amongst many others. Although the Porsche 911 went through some technological changes over the years, the basic concept which made the 911 so sought after remained.

Inspired by the 356, the Porsche 550 Spyder was introduced in 1953 at the Paris Motor Show. The 550 Spyder featured a mid-rear engine layout which made the 550 more balanced and was perfectly designed for racing. Driven by legends such as the iconic James Dean, the 550 Spyder grew in popularity on the racetrack. Its legendary styling led to the 550 Spyder being owned by many celebrities of the time.

Although the 911 was a great sports car which boasted plenty of power, in 1975 Porsche decided to introduce an extra powerful model. This was Porsche’s most powerful model at the time and was known as the fastest production car available in Germany. It was pure Porsche performance! The 930 Turbo boasted 260 horsepower from its 3.0 liter flat six engine. The 930 Turbo sported 0-60mph in an incredible 5.2 seconds. The 930 sadly ended its production run in 1989.

The 917 was a beast of sports car. It boasted an enormous 1,100hp 12-cylinder engine. The 917 could reach 60mph in an incredible 2.3 seconds. In addition, it was able to reach 0-124mph in just 5.3 seconds. On the test track its top speed was an astonishing 240mph! An incredible feat for Porsche. It was the race car that led Porsche to win the Le Mans 24-hour motorsport race in 1970 and 1971. The 917 is quite possibly one of the most iconic racing cars of all time. From its unique styling, to its incredible performance, the 917 was a true legend on the race track.

In 1993, Porsche had to think out of the box in regard to its model design. Having gone through an economic depres-sion at the time, car sales were down and Porsche had to come up with a plan. The Boxster re-introduced the mid-engine layout and combined it with the flat-six engine configuration of the 911, but with a modern, water cooled engine. Launched in 1996, this 2-seater roadster made a huge comeback for Porsche and revived sales for the company. In 2005, Porsche brought out a fastback coupe version known as the Cayman was has also been incredibly successful.

Ending off our array of amazing Porsche models is a more recent model known as the Porsche 918 Spyder. Launched in 2013, the 918 Spyder boasted incredible styling with sleek curves and an aerodynamic design. The 918 featured a hybrid engine which revealed Porsche’s desire to show their concern for the environment in keeping down emissions and fuel consumption. This by no means toned down its performance, with the 918 being able to do 0-60mph in 3.0 seconds flat. The 918 Spyder was sold out in December 2014 and its production ended in June 2015.

There have clearly been some iconic Porsche models over the past 70 years. Porsche definitely haven’t stuck to the status quo with their styling and design and have kept the public engaged and excited about their models over the years. We salute Porsche and celebrate with them for leaving a fine legacy which continues into the future as Porsche races forward with its amazing sports cars.