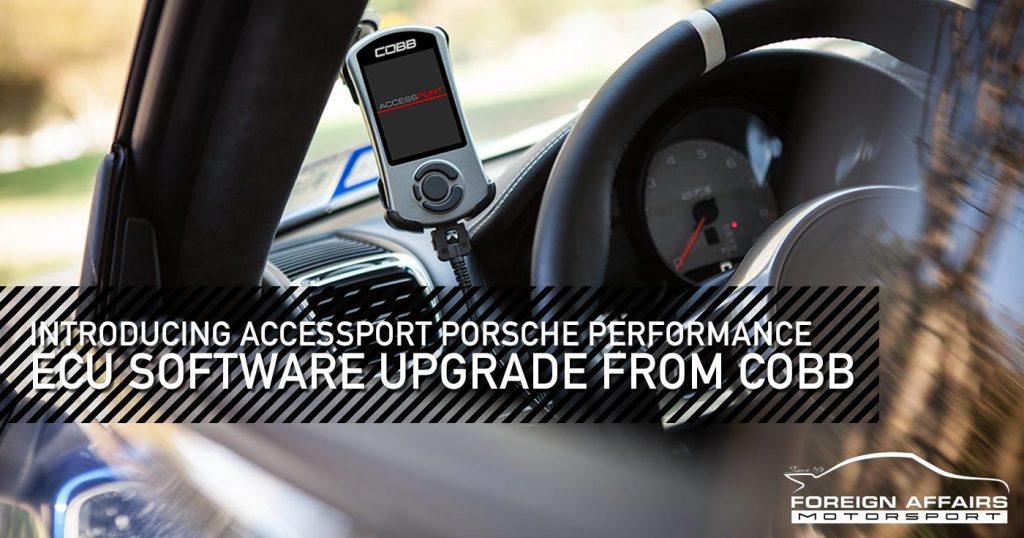 In case you’ve missed it, COBB Tuning has recently released an update to the Accessport v3 which makes it compatible with 991.2 Carrera and 911 turbo, and the 718 Boxster and Cayman. While we cannot stop mentioning what an improvement an Accessport can make to a Porsche’s performance, we have been flooded with questions on how the Accessport works.

What is an Accessport?

The Accessport v3 is Cobbs Tuning’s all in one plug and play tuning module. Once the device is installed and the appropriate tuning maps are loaded, you will have access to multiple features previously unavailable to you. The biggest appeal of the Accessport is the ability to change your cars tuning map on the fly, many of our customers use their Porsches as a daily driver and prefer a map that’s close to stock during the week, and then change the map to something a lot more aggressive over the weekend and for track days. When it’s time for a service, you can easily load the stock ecu map, then safely and easily remove the Accessport from your car.

How is it Installed?

Traditionally, the Accessport is a simple plug and play device. The device is loaded with a suitable map, then is your plugged into the On-Board Diagnostics II port, or OBD II, and after a small delay, the map will be ready to be flashed to your onboard ECU. With the most recent update this process has changed, and this is the main reason why this update has been so anticipated, as your cars ECU will be removed and unlocked by COBB Tuning before you can install the Accessport. This is a major step forward in vehicle tuning as it allows for a wider range of vehicles to use an Accessport, as well as allowing for further improvements in tuning maps.

That much is true, there is plenty of aftermarket map switching products available, but none offer the all in one package the Accessport offers, as it works as a tuning map controller, it can also be used an OBD II monitor and a data logger. Since the Accessport is installed with a connection to your OBD II port, you can read any error codes that have been logged and clear them if you’ve managed to resolve the problem. Your car’s ECU passively logs every bit of data it can, which is traditionally unavailable to you. With the Accessport, you have access to all this information, and with the ability to read them off digital gauges which saves you from having to install aftermarket analogue gauges. Some of this hidden information includes air to fuel ratios, ecu speed, fuel rail pressure, injector pulse width, and boost pressure.

When you’re on the track, the Accessport gives you an advantage over everyone else by allowing you to set a custom rpm warning to ensure every shift is perfect. To this, you also have the benefit of your very own performance evaluation suite, allowing to accurately record your quarter smile time, your 0-60 mph and time and your top speed achieved. When you finish up at the race track, you can simply plug your Accessport into your computer and download all your datalogs with COBBS Accessport Manager.

If your Porsche is equipped with a PDK Automatic Gearbox, the Accessport v3 offers you another completely unique feature, with PDK Tuning Packages. Just like being able to change the map of your engine, the Accessport will allow you to change the behavior of your gearbox, making sure that every bit of power is put down.

Should you have any further questions on increasing your Porsche’s performance, or you would like to learn more about COBB Tuning, look no further than Foreign Affairs Motorsport, an authorized COBB dealer, and South Florida’s Premier German Performance and Race Facility.