All About BMW’s iDrive Modular 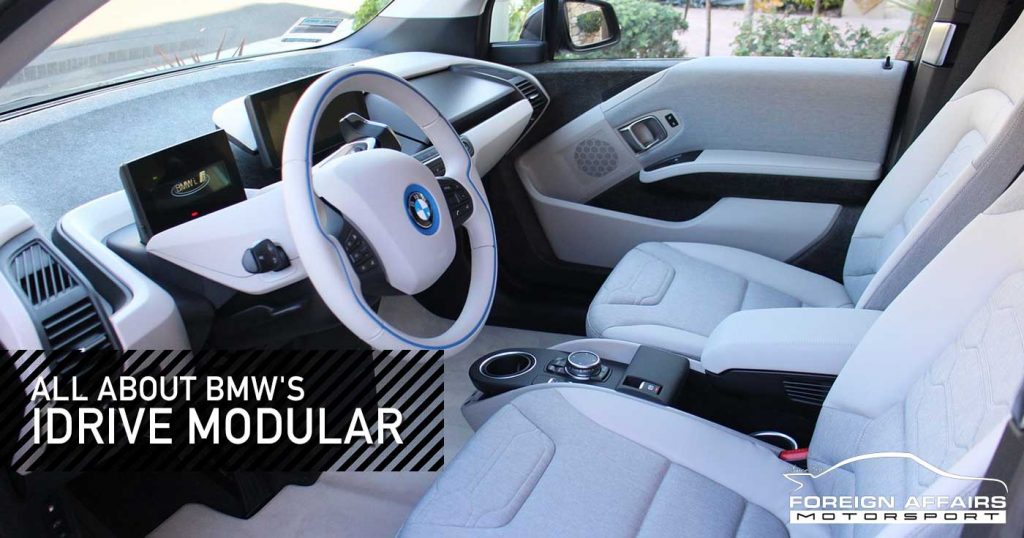 The future is an exciting place, especially in the automotive world. One such example of exciting innovation is the BMW infotainment, navigation and climate control system called iDrive (often confused with BMW’s latest range of compact commuters and hybrid i-series vehicles).

Background to Electronic Technology in Vehicles

During the 90’s and right through to the early 00’s we saw computer control systems (commonly called engine control units or ECUs among the petrol heads) take the place of many of the older, well-established electro mechanical systems commonly found on vehicles of the time. Any juvenile technology is not without its teething problems, no matter how well implemented, and this period saw mechanics tearing their hair out with vehicles that wouldn’t start, had misfired, or mysteriously stalled/accelerated for seemingly no reason whatsoever. The crown jewel from this period was the Toyota accelerator pedal issue, which had the Japanese manufacturer doing a huge recall between 2009-11.

Breaking into the Millennium – The Connected Era

It’s a simple fact that vehicles simply don’t function without their requisite electronic systems. But now that computer engine control technology has been used for more than 30 years, surely we have ironed out most of the kinks, right? Technically, we have, but a new automotive problem child has risen to take its place – infotainment systems. With the rise of the smartphone and its connected generation; people are expecting more and more from their cars. Cars should no longer just be transportation from a to b, but also a mobile office, providing everything from navigation, communication, to visual and audio entertainment. They should have driver aids such as automatic parking, radar distance safety systems and even self-driving features. As vehicles become more and more autonomous, so the amount of electronic systems proliferate.

BMW anticipated this, and began working on their incarnation as early as 1999. Dubbed iDrive, the BMW system began solely as navigation using map CD roms that were accessed from a navigation module in the trunk of their E65 7 series. The system was intuitive in that it used a single control wheel and color screen method of interface. Electronic technology doesn’t stand still, and iDrive has morphed into the central hub for infotainment in a BMW. The legacy of the single control wheel remains, but is now also used for climate control, communication and entertainment. In addition, programmable buttons and gesture controls are also used.

With each feature comes more susceptibility to failure, and especially if your version of the iDrive system is older, faults are likely to occur. Here is a helpful checklist of possible problems:

At Foreign Affairs Motorsport we have years of experience in BMW and combine this with state-of-the-art software tools to restore you iDrive system to its former glory. Whether you have a serious problem or just need some advice (say you’re thinking of upgrading your BMW’s infotainment) no request is insignificant to our ASE certified team.