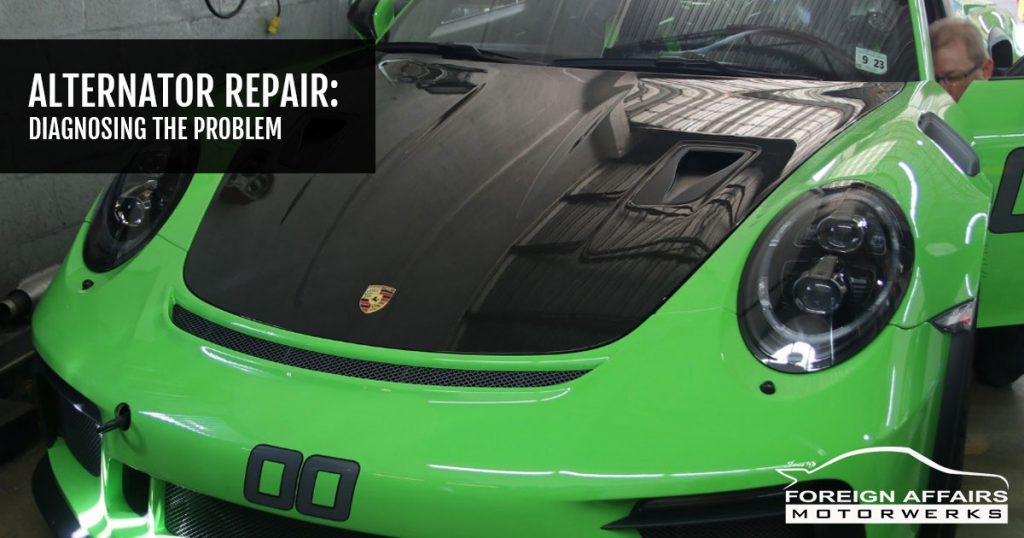 Alternators have been used on cars since the early 60’s, replacing problematic generators. Generators were terrible at regulating voltage and would often overcharge batteries and damage them unless paired with regulators that were usually reserved for the most luxurious of vehicles. Alternators solved the problem so well; we still use them today. While alternators are more reliable than generators, they can still fail and need repair. Let’s have a look at how alternators fail, how to diagnose a failing one, and overall alternator repair.

The Benefits of Alternators

Unlike generators, which spin a set of copper coils around a stationary magnet to generate AC current, an alternator generates DC current by spinning a magnet inside of a stationary coil. Most cars use 12V electrical systems, and thus need DC current as it supplies a constant 12V, whereas an AC is constantly varying between +12V and -12V.

How Do Alternators Fail?

There are three major ways an alternator can fail.

The most common way an alternator fails is when the circuit the alternator is in breaks. The main culprit for broken circuits that we see here in South Florida are rusty terminals. The salty ocean air causes the terminals of an alternator to rust and corrode. As the rust forms it can insulate the metal of the terminal and the attached cable so that no current can flow. Simply cleaning off rust can fix this issue.

A broken circuit can also occur when the internals of an alternator break. If any of the windings inside the alternator break, either from impact, overheating or corrosion, a short circuit may occur which leads to the generated current either being too high, too low, or nonexistent. A professional auto repair shop can solder the damaged coil, or completely replace it if needed.

The second culprit is an electro-mechanical failure. Alternators use slip ring bushings to provide power to the rotor in the alternator. The rotor is the magnet that spins in the alternator, and unlike traditional magnets that give off a permanent electric field, these electromagnets are only magnetic when they are being powered. If the bushings have gone bad, the rotor is no longer being powered and cannot produce the electric field required to create current. A set of new bushings is often the best way to fix this issue.

The other way an alternator can experience a mechanical failure is when the bearing that allows the rotor to turn freely fails. Even a single bailed ball in the bearing can create such friction that the rotor can no longer turn and will often damage or throw the drive belt.

If your car won’t start, has a glowing battery light or you notice your headlights are steadily getting dimmer, you either have a bad battery or bad alternator. A repair shop will use a multimeter to quickly test the voltage across your battery when your car is off. The voltage of your car’s battery should be around 12V when the engine isn’t running. Your car will then be started, and if the voltage across your battery should jump to anything between 13V and 14V. Anything higher than 14 or lower than 12 with the engine running is a sure sign your alternator has an issue.

Now, we know not everyone has access to a multimeter, and can’t exactly get to a repair shop when your car is dead. If you’re in the unfortunate circumstance of having a car that won’t start, the best way to test your alternator is to use a jumper box or connect your car’s battery to another car. Once your car has started, safely disconnect the jumper cables. If your car continues to idle and you can drive away safely, it’s likely your car’s battery is bad. If your car immediately cuts off, there’s an issue with your alternator.

From bad batteries to alternator repairs, no matter what gremlins are plaguing your car’s electrical system, our team of certified pro’s will get down to the root of it all! Engines, transmissions and electrical, Foreign Affairs Motorwerks has been South Florida’s premier luxury auto repair, performance & race facility since 1978.