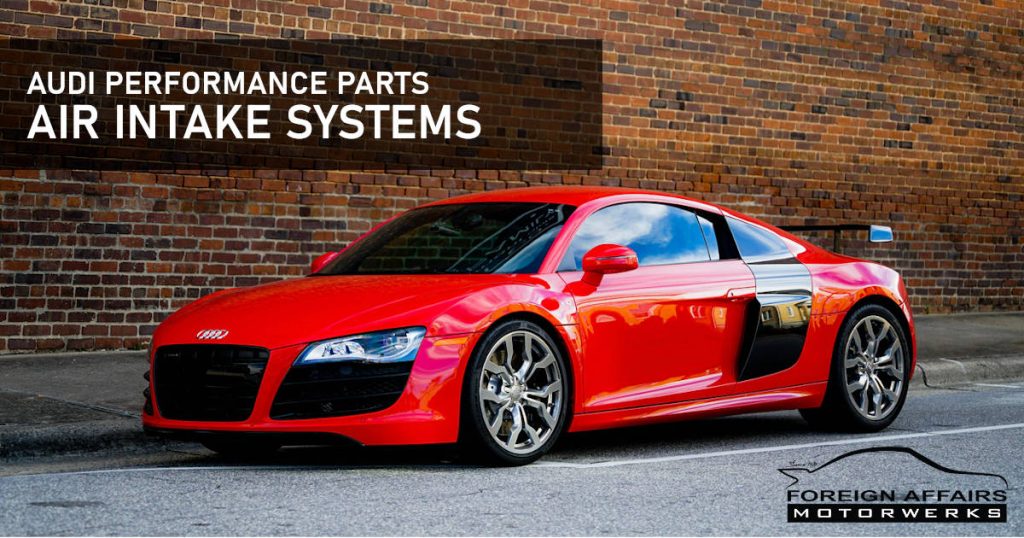 Fuel and oxygen. These are the two ingredients that every internal combustion engine requires to function. Air intake systems control how oxygen is taken into your engine and plays a vital role in the performance of your car. If your Audi isn’t running optimally, then it may be time to get your air intake system checked out. Let’s have a look at what an air intake system is and how it has a crucial place in the Audi performance parts ensemble.

What Is An Air Intake System?

Your engine breathes through your air filter. The air filter’s role is to sieve out any dirt or dust particles in the air that could be harmful to your engine. Larger items such as leaves, or insects are generally filtered by a screen, while the air filter deals with the smaller particles. The air filter is usually housed in a small plastic or metal box and sits near the throttle valve. Air filters usually capture around 80% to 90% of particles while premium, performance-based air filters capture up to 95% of air particles.

It’s important to have the right air intake to prolong the life of your engine.

The mass airflow sensor or meter measures how much air is coming into the air intake system. This is vitally important for the engine to determine how much fuel to inject into the cylinders. Usually positioned on the intake manifold, the mass flow sensor measures air intake and passes on the data to the engine control unit. There are two types of sensors: vane meter and hot wire. The vane meter system uses a flap system that the air pushes back to measure the airflow. Hot wire sensors measure the airflow via a system of wires. Electricity heats the wire which leads to a decrease in current. At the same time, the airflow cools the wire leading to an increase in the current.

Audi Performance Parts You Can Trust

When it comes to finding the right air intake for your Audi, Foreign Affairs Motorwerks are the professionals. Their diagnostic team will be able to inspect each part of your air intake system. They can also kit you out with an Audi performance air intake system to take your Audi’s performance to the next level. Their team of highly trained technicians also offer a comprehensive Audi factory service. Call us today at 954-746-0488.