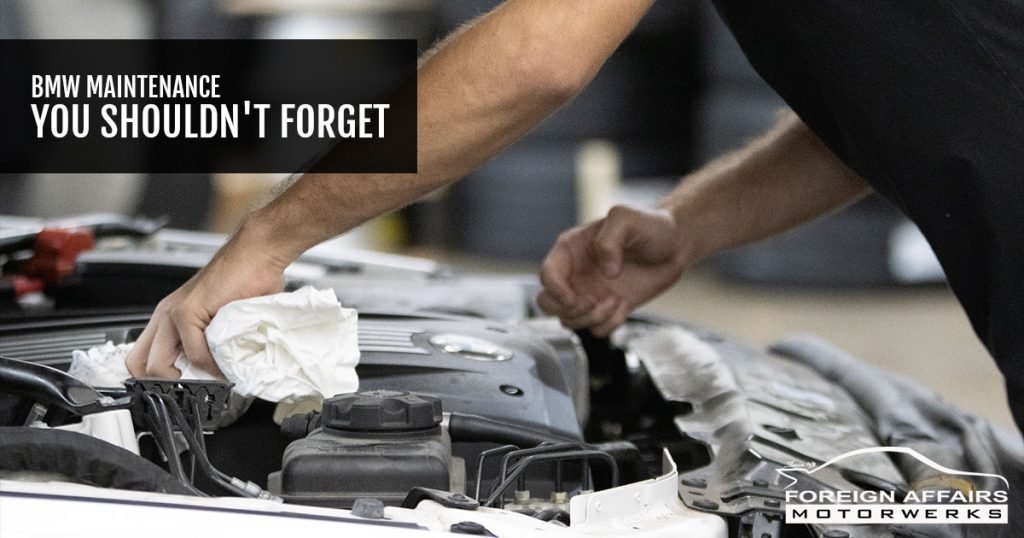 “Freude am Fahren”, sheer driving pleasure has been BMW’s slogan since the early 60s and perfectly encapsulated everything BMW strives for when building their cars. The best way to ensure your BMW remains the ultimate driving machine is by making sure it receives its recommended maintenance. We know that sometimes it may be difficult to remember what maintenance happens when, and we don’t recommend you miss any of the BMW maintenance recommendations, but here are some maintenance items you really don’t want to forget about.

The most common failure modern BMW’s experience is with their VANOS systems. VANOS is BMW’s variable valve time system that changes the timing of valves to smooth out idles while offering improved fuel consumption at cruising speeds and increased performance when accelerating.

VANOS works by measuring your engines RPM’s and uses solenoids to push oil into the system, which then pushes a special helical gear in between the cam and cam gear. The further in the gear is pushed, the more the valve timing is changed. Vanos systems fail when the rubber O-rings in the solenoids deteriorate over time, which allows oil to enter the system at low RPMs, and pushes the helical gear into place, changing the timing prematurely.

VANOS systems can also fail when one of the two solenoids gets blocked. One of the functions of engine oil is to help keep the engine clean. When this dirty engine oil enters the solenoids, the debris in the oil can block the solenoids and prevent oil from entering the system, essentially rendering the VANOS system inoperable.

The V8 in the e9x M3 and the V10 e6x M5 and M6 will forever be remembered for one thing: Rod bearing failure.

While the S85 and S65 engines were the first to experience this issue at such a scale, some newer M-cars still struggle with their rod bearings. The issue arises because the clearances between the camshaft journals and the bearings are tighter than they were on older engines. This led to oil starvation between the cam journals and the bearing, which leads to the cams wearing out the bearings and you needing an engine rebuild or replacement engine

While BMW has gone through great efforts to improve this issue, it still persists in newer models, even though it is much less common. In order to prevent premature rod bearing wear, the recommended oil change of 10,000 miles, is brought down to every 5000 miles or 6 months on M-sport engines that often see high RPMs either on track or during spirited driving. BMWs that are driven daily can stay within the original recommended schedule.

It’s also vital that the correct oil be used in your BMW. While it’s recommended to fill your BMW’s engine with 10w-60 oil, it’s important to find an oil with a high SAE 60 viscosity, as many performance oils marketed to M-car owners fall on the short end of the viscosity range. Low viscosity oils often see their weights sheared down from 50 to 40 weight long before the 10,000-mile service interval. For owners that take full advantage of their M-cars performance, it is recommended to swap to a 5w-50 oil over the 10-w60.

BMW further advises owners to have their engine oil tested to catch early bearing wear and have the rod bearings replaced completely after 75 000 miles.

At Foreign Affairs Motorwerks, we built our reputation on being the go-to maintenance and race prep facility for European cars in Florida. While we may have expanded to cars from all over the globe, our rich history with European, and namely German cars. That means you won’t find a better facility to bring your BMW to.

Whether it’s something as simple as an oil change, or as complex as a full engine rebuild, our talented team of performance shop pro’s will make sure your BMW will forever be the ultimate driving machine. So, what are you waiting for? Call us at (954) 746-0488 today!