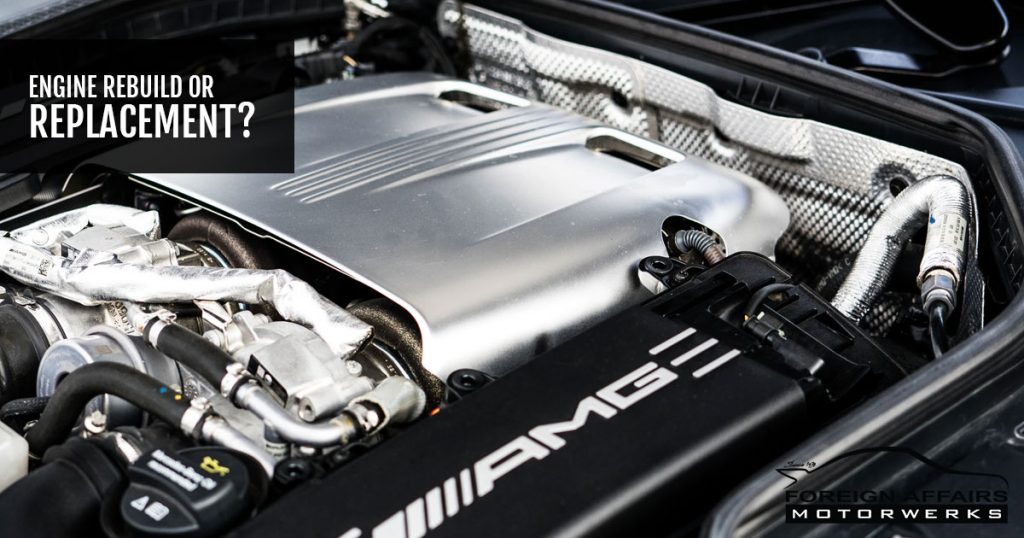 No-one wants to think about spending money on an extensive car repair. When it comes to keeping your car on the road, an engine rebuild or replacement might be inevitable. If you’re worried your engine might be close to giving up, then an engine rebuild may be the best option for you.

But how do you know if you need a rebuild or an entire engine replacement? We weigh up the facts to help you decide.

Engine failures are often linked back to a common cause: the issue of heat. An overheating engine can have various causes such as a cooling system failure or a lack of oil pressure. An engine has moving parts that create friction when they aren’t lubricated. The following issues are the main culprits that lead to engine failure:

These issues can result in engine damage due to overheating. A common symptom to watch out for is a blown head gasket which can cause coolant to leak into the engine block. When coolant dilutes with engine oil, a lack of lubrication results. When you know what caused your engine to fail, then you can decide if you need an engine rebuild or replacement.

When To Consider An Engine Rebuild

The following signs will help you to know if it’s time to consider an engine rebuild or replacement:

An engine rebuild is exactly what the name suggests. A team of trusted mechanics will remove the engine. and disassemble it. They will then clean and inspect and engine and replace any damaged parts. Finally, the technicians will replace any seals, gaskets, and lubricants in the engine cavity. OEM standards are upheld throughout the process. An engine rebuild will result in all the major parts of your engine being replaced. This includes camshafts, crankshafts, and pistons.

When It’s Time For An Engine Replacement

Sometimes an engine rebuild just isn’t possible due to extensive damage. A compromised engine block means that it’s time for a new engine. This may be due to a broken connecting rod of a broken camshaft. If the exterior of your engine block has cracked, this may require an engine replacement. An engine specialist will be able to determine if your engine can be rebuilt or not.

Advantages Of An Engine Build Or Replacement

A rebuilt engine gives you peace of mind to continue driving confidently. An extended engine life means that you’ll be good to drive for years to come. Another advantage is the ability to program your ECU. This allows it to communicate with your refurbished or replaced engine. An engine rebuild may end up saving you money while still offering you years of

At Foreign Affairs Motorwerks, we’ve worked on countless engine rebuilds. From BMWs to Ferrari’s, we are specialists at engine maintenance and rebuilds. We have over 125 years of combined experience amongst our workshop team. We’re equipped to give your engine the TLC that it deserves. Call us today at (954) 746-0488.

Have a need for speed? Check out our Speed Talk blog for all kinds of car related tips and advice! You can also follow Foreign Affairs Motorwerks on Facebook to stay up to date with all the latest articles and events.