Looking For An Aston Martin Mechanic In South Florida? 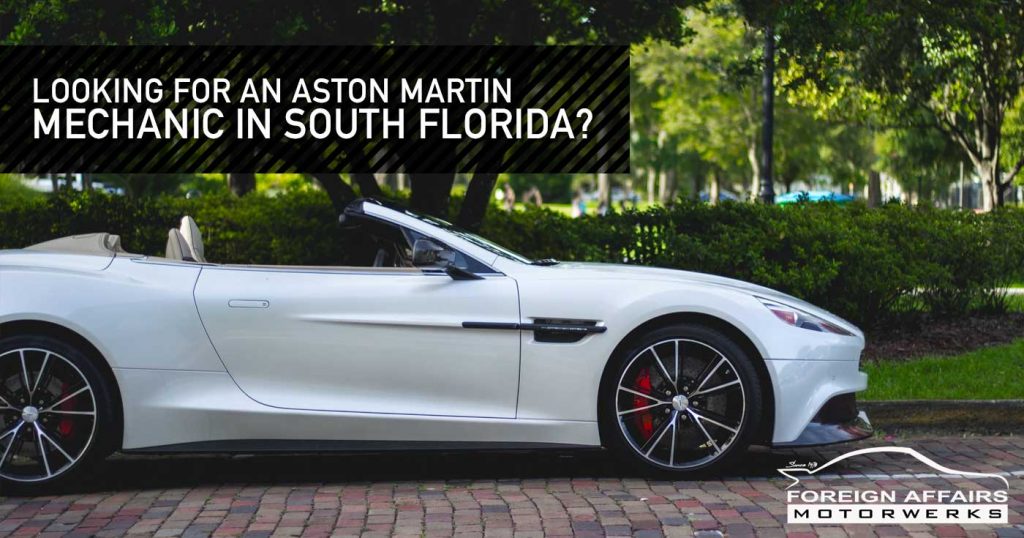 Aston Martin will forever be associated with the iconic figure of Bond, James Bond. They are the British equivalent of the Mustang, matching each wild bronco under the pony car’s hood with the quintessential English understated vigor.

Underneath that gorgeous body, most of Aston Martin mechanics are shared with Ford, resulting in a powerful, reliable and surprisingly affordable muscle car. If you are looking to get into Aston, there has never been a better time with good used DB9s and Vanquishes to be had for good prices. The only problem of course being the one that plagues all car lovers. How do I keep on top of my maintenance? Our certified Aston Martin mechanics have the answer!

Like any vehicle, the more preventative your approach to maintenance is, the more trouble-free miles that you can put behind you. We’re going to take a quick look at common problems that Astons have, and how Aston Martin mechanics fix them.

Owning an older (around mid 2000s) Aston means that many of the engine seals will start to perish, as is normal with any car. This can cause oil cooler or timing cover leaks common to the DB9s. Unfortunately, removing the timing cover requires almost the full front-end of the car to be dissembled and can take an entire day. Aston have modified their oil cooler system to eliminate this problem, so if you haven’t already, we recommend that you upgrade to the newer system.

Vantages can suffer from stuck thermostats and this usually causes overheating while driving in town, followed by over-cooling on the freeway. Ignoring these warning signs can lead to damaged water lines or at worst, a seized engine. According to Aston Martin mechanics, this can lead to major problems.

Oddly enough, some of the earlier DB9 series suffer from paint work problems. Since they are all hand-built cars it isn’t really surprising that there may be a few polite hiccups in the production. However, if you are looking at the DB9s, we’d recommend you look at the later models, since you may also have the benefit of getting an updated oil system thrown in.

Like a lot of modern cars, electrical gremlins can appear as the car gets older. Most of the time, these manifest as windows that get stuck, or sound system problems. They occasionally have high quiescent battery drain, so if you don’t use your Aston regularly, put it on a battery charger.

Some Astons have expensive ceramic brake discs that can get damaged over the years by road dirt and chemicals in car wash soap. Make sure that you carefully check the condition of the disks if you are looking at one of these models. Bear in mind that a steel disc conversion can be done but will have a visual and performance impact.

At Foreign Affairs Motorwerks, we have years of experience working on foreign and temperamental marques and you can be assured that our ASE Certified team will deal with any Aston Martin problems quickly and efficiently.

Astons are for a unique class of super car drivers. Fairly uncommon in the U.S. and even in their native U.K., they are less flashy than their Italian counterparts, choosing to rather ooze class and quiet style, making an impression by not making it—if you get what we mean. This does not mean that they are any less competitive than their rivals, as anyone who has driven their DB9 or Vantage on a track day will attest. In classic British form (it’s not done to wear your life on your shirt sleeves, old boy,) their true beast comes out when you press them hard but even then, it’s shaken, not stirred.