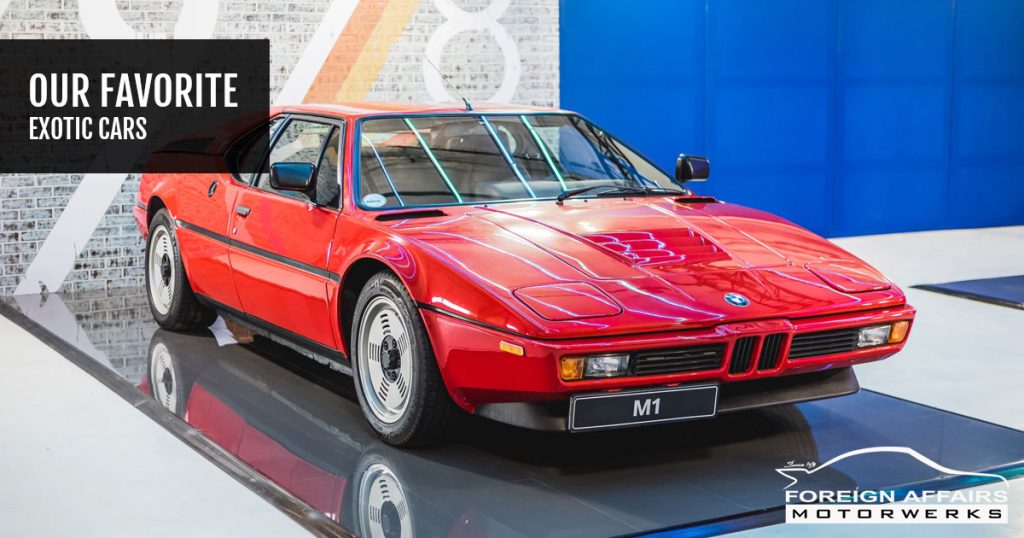 At Foreign Affairs Motorwerks we are all about the rare and wonderful marques that have come out of over the century of the internal combustion engine. As a celebration of this, let’s take a look at five exotic cars that we think are swell. Now before we start rolling, let’s just say that it’s hard to limit the list to five vehicles. There are many brands and marques that we aren’t going to discuss, ultimately it does come down to personal preference.

Possibly the rarest and most unique BMW ever ‘mass’ produced. As part of a collaboration with Lamborghini (apparent by that gorgeous exterior) the M1 was the first ever mid-engine sports car from the Bavarian marque. On sale for three short years only 453 of these exotic cars were ever produced and most are still on the roads. Not only does this beauty look like something out of back to the future, so does its price tag. They go for over half a million eagles!

As stunning as BMW’s styling may be, we have to hand the prize for the most beautiful exotic car ever built to Jaguar. There is just something about its curves that give Latinas a run for their money. It is a true connoisseur’s auto, from the baby boomer age of motor sport which sparked the Woodstock revolution. Having both the looks and performance to match.

Since it had a good production run, it is not overly difficult to get a good example. Your investment is certainly going in one direction. Besides, how many owners can say they have the same car as Steve McQueen? If you don’t believe us, pop into the Petersen Museum and see for yourself.

Few exotic cars shocked the world as much as the Bugatti Veyron did when it was first announced. The press (including the Top Gear presenters at the time) were skeptical of it ever being produced. This beautiful combination of Italian styling and German performance is well deserving of the title of the fastest production vehicle in the world. Coming out of the Ferdinand Piech era of Volkswagen, this car is basically the automotive version of the Incredible Hulk.

Another herald of things to come. The Tesla was by no means perfect, especially in terms of handling but it did usher in the dawn of a new age for motoring. Time waits for no man; the future is definitely electrifying but it takes courage to take that first ‘small step.’ Tesla proved to the world that electric vehicles were not only viable but also, in the words of Jeremy Clarkson, ‘Biblically quick.’

German for ‘the big one’ this car is the most infamous sedan produced by the luxury brand. Up until now we have talked mainly about performance, but we felt it only fair that we should end with luxury.

Taking a leaf out of Citroen’s book, this car had a Pneumatic everything. We mean literally everything. Suspension, windows trunk, seats and even the doors are all controlled via compressed air. While this is pretty amazing from an engineering perspective it seemed to make this vehicle attractive to almost every dictator of the last century.

Notable owners who queued for this V8 behemoth include Saddam Hussein and Coco Chanel.

This is by no means a complete list of all the exotic cars we feel are worth looking at. Over a century has brought stellar developments to the automotive industry and for over 30 years we have been proud to be a part of this. Having seen so much, we can only wonder where to next?