Popular Porsche Cars At The 2019 DRT 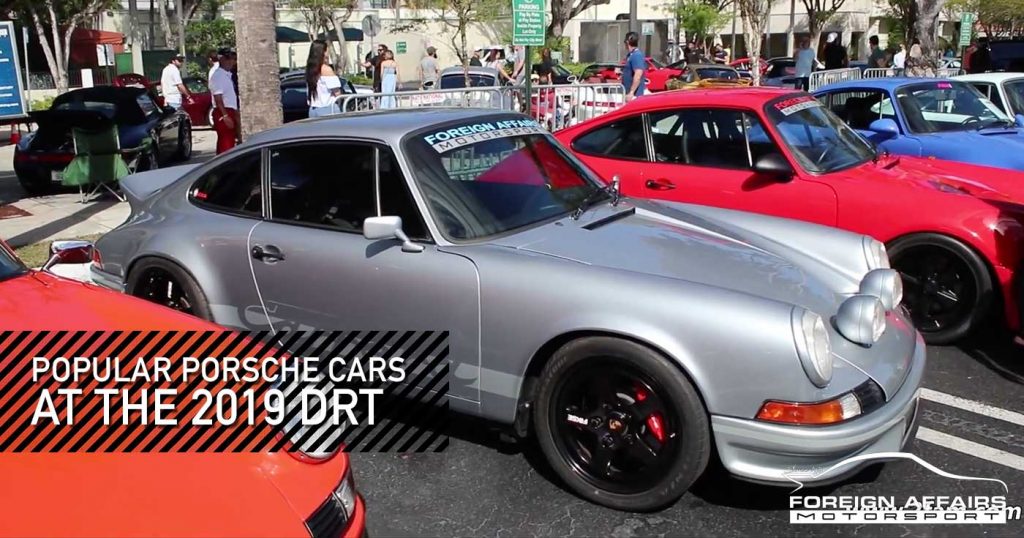 Since 2015 Das Renn Treffen (or DRT), has been a firm and favorite fixture on the South Florida car enthusiasts’ radar. Launched after VolksBlast, (a twenty-year-old vintage car show born from various car clubs such as the Wide Five VW and the Palmetto Bugs), DRT never fails to impress. The first event launched in 2015 and was originally meant to raise funds for various charities. After its first success, members saw the potential such an event could have on the community in addition to the charities it could benefit.

From humble beginnings, with just over one hundred spectators at the first event, DRT has grown significantly. The car show now boasts over four hundred and fifty vehicles, more than ten thousand spectators annually, and has raised six figures for the charities it supports. It’s no wonder that it is considered the most anticipated Porsche event of the year on America’s East Coast.

Having taken place over Feb 8-10th, this three-day Porsche focused extravaganza showed off rare historical models, from race cars to sports models, and was pegged as a “must attend” for car all enthusiasts. Needless to say, the high-octane community was revved up, fully fueled, and astounded by the spectacular array of fantastic vehicles and stands on display this year. Some of the most spectacular and hyped models that really got the spectator’s engines running included:

As every Porsche enthusiast knows – the 911 is the essence of Porsche! These naturally aspirated stunners have evolved considerably since debuting in 1972. With some incredible Porsche performance and styling additions, these cars really do speak for themselves!

It houses a 3.8-liter power plant. It includes some fantastic customizations as well as a proper cold AC and a throwback to the original black and white houndstooth interior. Today it spends its time travelling to shows. Its owner has had the vehicle since new and has been a one of our customers since 1994!

This particular 2015 918 Spyder has the very desirable Weissach package option from the factory.   The Weissach package adds further performance to the 918 with a noticeable weight reduction (puts it on a diet!) and various aerodynamic tweaks.  These include lighter magnesium wheels, more carbon fiber in the bodywork, a bit less soundproofing than the standard 918s, fireproof seats instead of the standard leather seats, and aero-blades behind the rear-wheel arches.  With these tweaks, the Weissach 918 has shattered the 7-minute lap time barrier for a street-legal car to go around the Nurburgring at a mind-blowing 6m 57s.

The exterior color on this 918 is known as Basalt Black Metallic in factory terms, and the interior has the Onyx Black leather with Acid Green piping, which is actually a $25k factory option.   It is also equipped with the very useful and accommodating Front Axle Lift System – when activated, the front ground clearance increases by an inch or so, allowing the car to navigate ramps and city terrains without damaging bodywork.  This is a $10k factory option as well.

Other features include a high-fidelity Burmester high-end surround sound system, seat pads for the light weight fireproof seats, and a Porsche Universal Charger for the 918’s hybrid battery pack if you are keen to drive it with just battery power without the gasoline engine recharging it.

In terms of performance, the car has a hybrid electric-gasoline powerplant – the gasoline engine is a screaming 4.6L V8 which produces about 887 bhp.  A 7-speed ultra-fast PDK works in conjunction with the AWD system to produce shocking acceleration from a standstill – with more than 1g of acceleration force.  Luckily, the car comes with huge Carbon Ceramic brakes to pull it to a stop.

Despite being a 2015 model, this particular 918 Spyder has just 865 miles on it!  Yes, 865 miles.  And only one previous owner.  A collector’s dream come true.  Provided you have $2-plus million pocket change…  As you can see DRT did not disappoint – from incredible super cars, to vintage collections, and customized beauties, there was something for everyone. As always, the Foreign Affairs Motorsport team were a great attraction with all the above-mentioned vehicles on display as vehicles customized and maintained in our workshop. Make sure we see you at DRT next year, but until then let’s leave you with a small reminder of this year’s event!