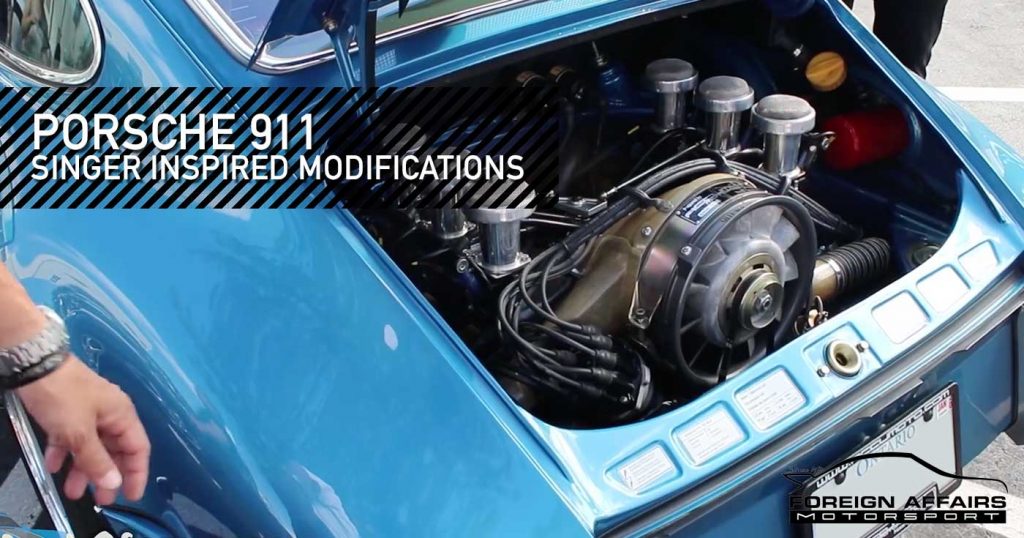 With the success Singer Vehicle Design has had with reimagining the classic 964 generation of 911’s, and with Porsche releasing their own restomoded 933 911 Turbo, Project Gold, the stigma of customizing classic Porsches has been lifted, with many Porsche enthusiasts opting to take inspiration from Singer and add their own unique touches to all generations of the 911.

It’s in the Details

The Porsche 911 has always had a unique silhouette, with each generation refining the formula rather than completely replacing it, allowing the 911 to stand out among its competitors. The challenge when modifying a 911, is making it unique without robbing the car of its identity and heritage. Singer has achieved this by using OEM Porsche parts and designs for inspiration, but using modern techniques to improve the cars beyond what was capable when these cars originally left the factory.

Swapping out an old tired engine for a newer modern engine may seem tempting at first, but there is a reason air-cooled 911s have seen their prices increase over the last few years, as the quality of the metal used in those engine blocks are just not seen in new cars anymore. So, instead of throwing that old engine out, consider doing an engine rebuild, replacing old pistons, rods, and gears with modern lightweight alternatives such as forged and aluminum parts, while getting the engine’s head ported and polished, allowing air to move more freely through the engine.

The 911’s flat six engine benefits from custom exhausts, with an open x-pipe exhaust not only adding to the overall performance of the car, but improving sound too. If you’re looking to dress up your engine more, ceramic coating on the intake stacks and exhaust allows you to create unique color combinations, and combined with engravings with metal in-lays will certainly make your engine a work of art, while improving performance as the ceramic aids in cooling.

For a more functional modification, individual air filters, carburetors, and throttle bodies add a mechanical bespoke look to the engine, and when finished in chrome and brass, lends itself to the steampunk aesthetic.

3D printing and aluminum milling has opened a whole new genre of modification as it allows anyone to have any part made to spec. While this is well known when it comes to custom interior and body parts, you may not know that these technologies are also being used to make various adapter parts. Adapters can be made to allow modern coil packs and injectors fit classic engines, both improving performance and reliability. Though to make this all work, a standalone ECU, such as a Haltech and Motec, is required.

A standalone ECU has more benefits than just running your engine, as it also allows for modern brakes, automatic gearboxes and cooling systems to be installed. One of the coolest modifications done using these ECUs, is removing the original pedals and drive by cable setups, and replacing it with a modern drive by wire system, that also allows modern luxuries like cruise control to be added.

Driving a classic Porsche doesn’t mean you have to go without your music. While it is easy enough to fit a single-din radio to your car, these radios are usually designed for a modern interior and often can ruin the look of your interior. A clever trick car restorers use is to rewire the original radio, leaving the FM radio option alone, and rewiring the AM or cassette option to a standalone media receiver which can be hidden in the glovebox, under a seat, or in the trunk. The media receiver allows for USB plug ins and Bluetooth connections, while keeping the classic radio in the car.

No custom car would be complete without a one of a kind interior. Whether you choose to go with late model seats, or retro bucket seats, there is a plethora of custom interior pieces to create a unique look. A custom ECU allows you to run late model steering wheels and dials, and if you’re keeping a classic or race inspired look, brands like MOMO and NRG offer a range of steering wheels from classic aluminum and wood all the way to fully flocked race steering wheels

No matter how old or new, whether you want a classic or outlaw inspired 911 design, our specialists will be able to help you with every aspect of building your dream car. Contact us today at (954) 746-0488.