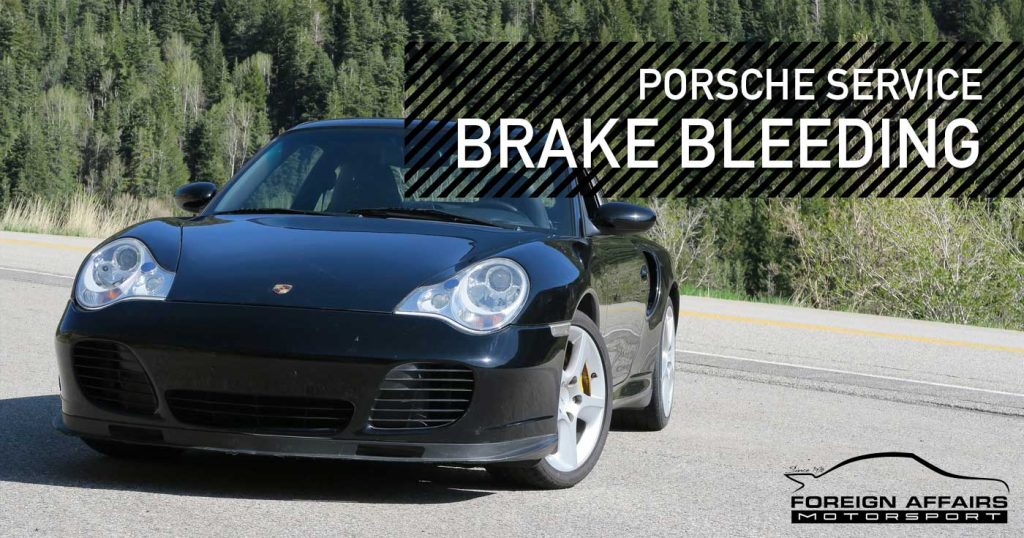 Getting the most out of your Porsche has a lot to do with how you look after it- which makes a regular Porsche service a necessity as a car owner. An important aspect of the service is brake bleeding, a process which puts your Porsche is in tip top driving shape, ensuring that you get the best driving experience out of your ride.

What is a Brake Bleeding Porsche Service?

Brake fluid is an important component of your car’s mechanics, playing the vital role of transforming the force from the master cylinder to all over the car. It does this by maintaining a liquid state while resisting compression, allowing it to perform its job well. However, every now and then brake fluid can be compromised by air, leading to why you need brake bleeding. Brake bleeding refers to the process during your service of removing any air bubbles from the brake fluid. As brake fluid is an incompressible liquid and air bubbles are compressible gas, their presence in the former can reduce the hydraulic process. It is performed on hydraulic brake systems on the brake lines, which are the parts that contain the brake fluid. It works like this: clean brake fluid that is free of bubbles is distributed throughout the entire system. It goes from the master cylinders to the disc brakes.

Why is Brake Bleeding Important?

If you’ve recently replaced your brake pedal and it feels low and spongy, you may need to bleed your brakes. This occurs when the pads of your brakes wear thin. When this happens, the level of brake fluid drops too low in the master cylinder reservoir. This allowed an air bubble (or multiple) to get pumped into the lines. As air is compressible, it creates something akin to a soft spring, which forms between your foot, the pedal and the wheels of your Porsche. It’s therefore necessary to flush the air out by bleeding the brakes. For Porsche owners who enjoy going fast, brake bleeding is an important aspect of your Porsche’s maintenance.

Why Does the Fluid Need to be Replaced?

The fluid can become contaminated with atmospheric dirt as well as other particles from the moving parts within the system. It also tends to absorb moisture from the air. This can lower the boiling point of the fluid, allowing for steam to enter (which like air, is compressible). When it comes to brake purging or flushing the same method is used, resulting in the old fluid being replaced with a new one.

Bleeding the brakes refers to the process of opening a small valve at the wheel cylinder, and allowing a controlled amount of brake fluid to escape. This allows the air to be released. There are five common methods of brake bleeding:

In summary, your mechanic can provide further information about brake bleeding and discuss if you need it at your next Porsche service. For more information about this and other services, call (954) 746-0488 now.