Signs That Your Car Needs A New Distributor 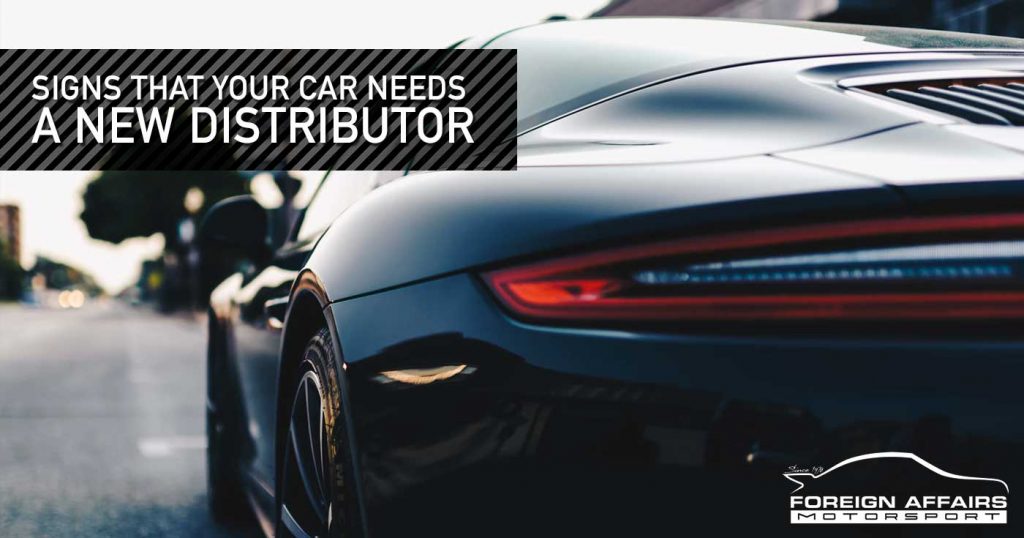 Before we have a look at what could go wrong with your car’s ignition system, we need to understand it a little better.

The first standard type of ignition system is called the Kettering or Delco system and was invented, (among other things) in 1910 by an American named Charles F. Kettering. It was first used in Cadillacs but soon became popular and used by most mainstream manufacturers.

The design features two main components. The first is an ignition coil and the second the distributor.

Inside the distributor, a set of contact points ride on an eccentric shaft. The shape of the shaft varies depending on the number of cylinders that your vehicle has. The contact points are electrically connected to a capacitor on the ground-side and the ignition coil on the hot-side. They act as a mechanical switch to control the current flow through the coil’s primary winding.

When they are closed, current flows through the primary winding and a magnetic field develops. As soon as they open, the capacitor discharges; the field collapses, and a high voltage pulse is induced in the high-tension side of the coil. Capping the same shaft that the contact points ride on is a rotor arm that distributes the high voltage pulse to the correct cylinder by creating an electrical bridge in the distributor cap.

As you can see, the ignition system has many active electrical and mechanical components, so it’s prone to failure. The correct combustion and running of your engine depend heavily on precision-timing. If something disturbs it, the engine may not run at all.

In this article we will look at some common failure points and signs that your distributor itself may need to be replaced.

Despite a working capacitor, a small arc usually occurs at the points contacts. Over time this can build up one face and pit the other face of the contacts, resulting in incorrect spark timing and a misfiring engine or one that starts difficulty.

Other possible faults are the points remaining closed or the capacitor failing. A failed capacitor usually results in a weak spark. The common fix is to simply replace the points and capacitor.

Due to the high-tension that both the cap and the arm have to deal with, the slightest imperfection, (cracks or chips) in either can result in what is called a sneak path.

Sneak paths mean that instead of the high voltage pulse flowing from the coil through the rotor to the correct spark plug, it arcs to ground through the rotor or cap instead. This can result in misfiring or simply no spark at all to one or all cylinders. The fix is to inspect the distributor and rotor for cracks. If either is suspect the only option is to replace it outright.

This commonly occurs when the coil overheats or one of the windings becomes open-circuited.

Avoid leaving the ignition of your car on the position just before ‘start’ as this allows current to constantly flow through the coil on older cars. It gets hot and cannot function properly until it has cooled down. A completely failed coil will result in no spark at all.

The shaft that drives the points and rotor is usually directly connected to the camshaft (think E30 BMW) or else driven off the shaft by a gear that is lubricated by the engine oil. Over time, the bearings on this shaft wear-out and the resulting end float causes the contact points gap to become irregular. This will manifest as misfires and uneven running.

The only solution is to replace the shaft and bearings or the entire distributor.

Most modern cars have replaced this ignition system with a fully-computerized capacitor discharge type either using optical sensing in place of the points or a crank position sensor in place of the entire distributor.

Depending on your model, certain engine sensors may trigger warning lights to alert you to a fault in the ignition system. Common symptoms of ignition system failure are lack of power, cutting out, misfiring, uneven running, or excessive fuel consumption.

Faults are much more difficult to pinpoint on a modern car, so if you are unsure, you’re always welcome to drop into our Pompano Beach Shop for some friendly advice.