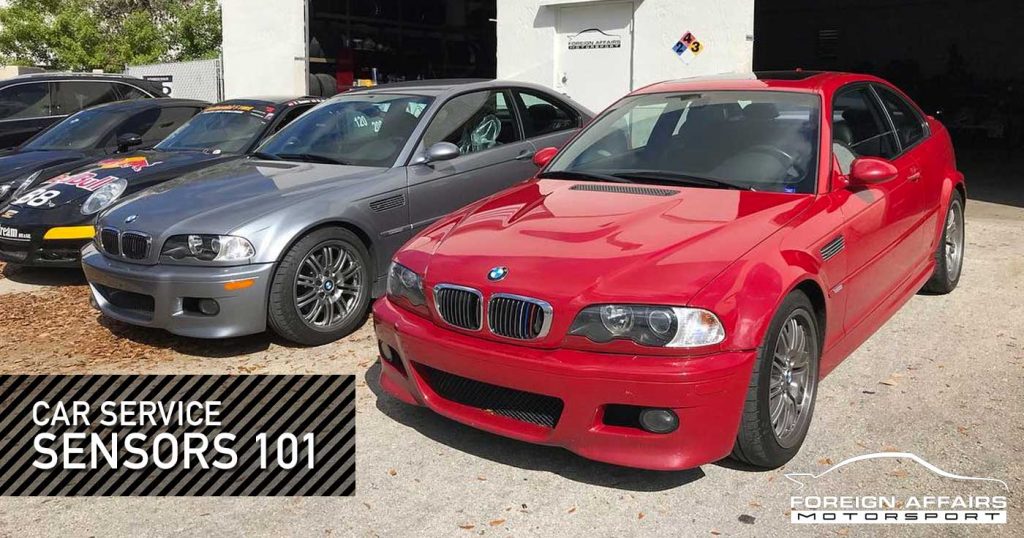 Today’s vehicles are more comparable to your smartphone in terms of technology than good old-fashioned mechanical engineering. Smartphones thrive on data – they collect information about your behavior and use it to preempt events. For example, if you always set an alarm for 5am, and one day you switch it off, your smartphone will remind you that the default alarm is not active for that day.

This is a tiny example of Artificial Intelligence (AI). AI is becoming more and more predominant in the technological world. For it to work correctly, it requires data, and lots of it. Your vehicle functions on a similar principle. Except, instead of collecting data on you, it collects data on your driving dynamics and engine functions, as well as the external environment. Modern vehicles can have as many as 200 different sensors.

Firstly, what exactly is a sensor? Generically, a sensor is a device that converts environmental variables (such as temperature) into electrical signals that can be read and interpreted by a computer.

A Look At Sensor Functionality

Let’s take an example of adaptive suspension systems commonly found in many modern cars. Sensors that could use an encoder design continually monitor wheel pitch, road surface vibration, and steering angle. A hall effect sensor monitors the wheel’s speed while another gives the crank speed and position. This data gets fed into the main computer over the CAN bus which computes the best steering sensitivity, adjusts the electronically controlled dampers, and can even apply the brakes if an emergency situation is detected.

This is just one example of a subsystem of sensors in your car. There are many others that are responsible for controlling the engine fuel/air mixture, idle speed, throttle response, electrical and mechanical loading.

Since many of these sensors are responsible for critical components of your vehicle’s running, and in some cases (such as impact sensors for airbags) your safety, they need to be robust. Many of them are constructed out of hard glass reinforced plastic cases that house a variety of sensor geometries. Everything from barometric pressure, temperature, vibration, position, speed, level, tilt, airflow, exhaust gas composition, and many more factors are recorded by your car’s computer. More than one sensor is often used to record the same variable since if one fails, the other can avert what occurred recently to Boeing with its MAX 737 dilemma. Alternatively a state observer control system might take the place of the faulty sensor, triggering what your mechanic calls ‘limp mode’ but what we all commonly known as the ‘check engine’ light turning on and your car not driving as well as it should. Sensor internals are often made out of rare earth metals and can be very costly to replace. In the next section we’ll look at service sensors, and what makes your check engine lights turn on.

Most cars provide a service warning. Either they give you the miles remaining until your next service or a light turns on. Most of the time these warnings are based on time that the engine has been running and your mileage readout. Some more advanced systems monitor your oil condition and detect subtle changes from other sensor data (such as emissions) to warn you that a service is due. A service warning light is different from a check engine light in that there may be no mechanical fault with your vehicle, however it is advisable to take it in for an inspection.

The dreaded check engine lights are usually triggered by sensor reading problems and can often come on in conjunction with the service light. This usually occurs when a sensor sends data to the computer that is either deemed incorrect (readings too high or too low consistently) or sends no data at all. Today reading sensor and computer faults is easy with an off-the-shelf OBD-II scanner. You can even clear the fault code and switch off the offending lights yourself. However, there is a caveat.

Frequently a check engine warning can be traced to a bad connection or a fault other than a damaged sensor such as a leaking intake manifold. To do this requires experience and expert knowledge of your vehicle. It can save you hundreds of dollars to consult an expert before simply replacing a sensor out of hand. When you feel seriously ill, do you consult a doctor, or attempt to solve the problem yourself? The same is true for your car. The complex integration of electrical and mechanical systems requires someone with experience in the field, such as our ASE Certified team to fix the real problem, and save you endless headaches.