What Mercedes Sees the Least of Repair Shops? 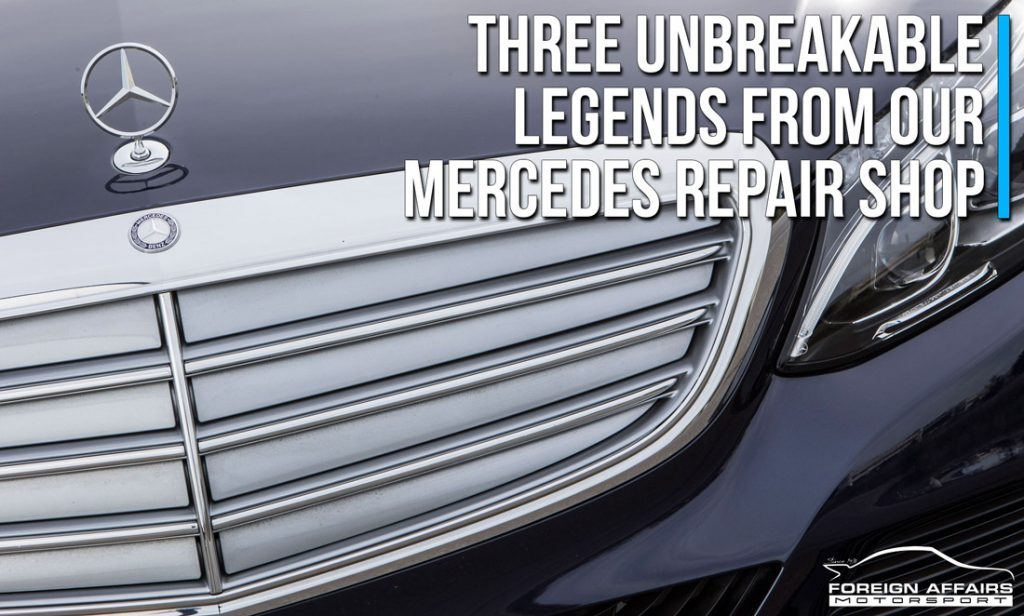 Every year, we’re lucky enough to see some of the most well-built, over-engineered cars glide into our Mercedes repair shop. What exactly is over-engineering? Well, in the motoring world, it’s quite simply any car designed to be more complex or resilient than it realistically needs to be.

While such machines are more of a rarity these days – as manufacturers search for ever more ways to achieve ultimate efficiency – you don’t need to go too far back to find some German sedans that were affectionately known as ‘tanks’, and Mercedes-Benz leads the pack in this regard with several of their older models. These Mercs exemplified German engineering and showed us that more complicated luxury sedans can withstand tough, extended operating conditions, too. They’re also some of the model ranges you’re most unlikely to see stranded on the side of the road.

Mercedes-Benz W123
Introduced early in 1976 as its new midsize car, the W123 went onto become one of the most globally popular Mercedes-Benz models, and maintains its legendary status to this day. While some models served as basic taxis (and others as excessive post-apocalyptic movie star limousines), in the USA the W123 was marketed as a luxury sedan, costing over $12,000 in its most basic specification, which was on par with a Cadillac Seville. With incredibly durable build quality (the interiors used real wood and rich fabrics) and a range of bulletproof engines, the W123 also introduced American buyers to diesels, with a number of these four- and five-cylinder models known to top 1 million miles. At the time, the W123 was the automotive answer to so many questions, and it’s difficult not to harbor a soft spot for one of the most dependable sedans ever to be constructed.

Mercedes-Benz W124
Introduced to the market as the first Mercedes-Benz to be called the E-Class, the W124 built on many of the established strengths that made the W123 such a respected model. Launched in 1984 (but sold in the USA from 1985), the W124 was the more modern answer to the W123’s increasingly dated design. The ‘first E-Class’ was further vaunted for its active and passive safety systems, and far more advanced suspension geometry (featuring a multi-link, independent rear suspension). Also, who could forget its ingenious, eccentric-sweep single-blade wiper system? As a microcosm of Mercedes meticulousness of the time, this wiper swept a larger area of the windscreen than any other car of the time. While some have literally tried to destroy the W124, there are enough of these models still around to serve as a reminder that it was one of the German carmaker’s best.

Mercedes-Benz W126
Taking a step up in size (but a step further back in time), we find the W126 S-Class range. Its 12-year production run speaks to this model’s immense success in the market. The W126 introduced a raft of technological firsts for Mercedes-Benz, including seatbelt pretensioners. With America’s love for large luxury sedans already established, local demand for this model was high and saw a large grey market developing. From 1987 – 1990, the W126’s exceptional standards of construction saw it rank highest for customer ratings in the J.D. Power Sales Satisfaction Index.

These are just a few of the bulletproof Benzes from the ‘tank era’, and while Mercedes-Benz has worked hard to reestablish its reputation for quality over the last decade or so (after the dip in the late 1990’s), these legendary Mercs somehow still stand apart as benchmarks for durability.