Transmissions: Add This Check To The BMW Service List 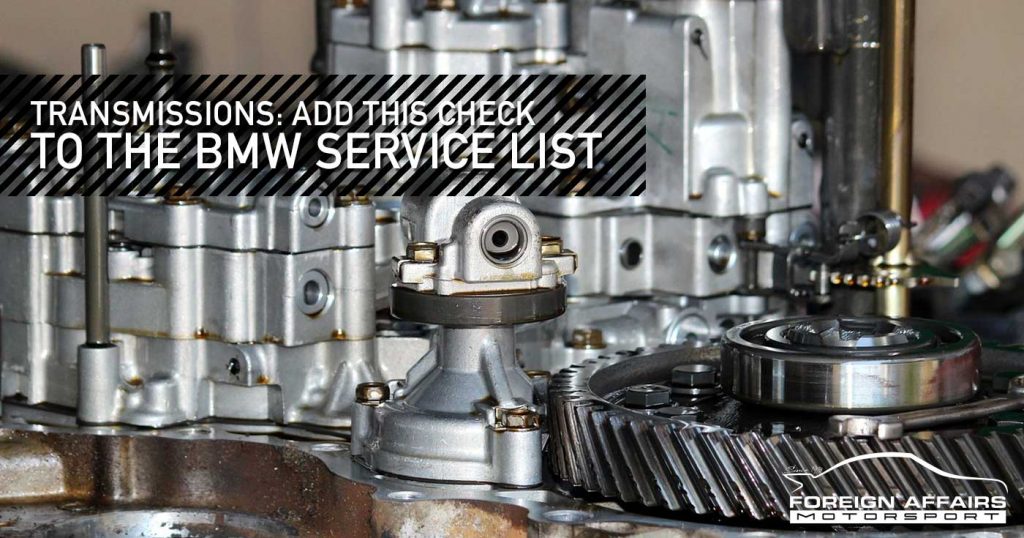 Wrong. Don’t make the classic mistake of ignoring the transmission until it is heard. It is a mechanical part, and like any other in your BMW, requires servicing. A happy transmission makes for an efficient vehicle since it is key in ensuring the torque and power created by the motor makes it to the wheels.

Common symptoms of a failing transmission are:

Whining usually means a problem with the differential, and a small (almost inaudible) amount of it is normal especially in high mileage vehicles. A transmission is essentially a speed and torque converter. Internal combustion engines develop their peak torque and power within a very specific revolution range. For a petrol engine this is commonly between 3000 and 4000 revolutions per minute (but can be lower for diesel motors).

This is all fine and well except that the driver’s needs vary. Pulling off, climbing hills, overtaking and decelerating are just some of the maneuvers that need to be performed in day to day driving. What the transmission does is to ensure that whatever the driver wishes to do; the engine is kept as close to its efficient range as possible. It does this by using gearing and friction coupling. Gears need oil, and friction couplings (such as clutches and torque converters) wear out and need replacing.

Any of the other symptoms in the list indicate the onset of serious failure in the clutch, torque converter or selector systems. If these occur, you should immediately seek certified BMW service technicians to prevent a costly repair bill.

A BMW is not like a Ram truck. Thousands of dollars are invested into research and development of its transmission systems, and they are tailored to suit each individual model. So whether you drive an X5 or a 3 series, the transmission will be cutting edge. As a result, it requires more basic attention, particularly in the form of oil changes.

Prevention is always better then cure, and although many BMWs have a sophisticated system that warns you when there is a transmission fluid or selector problem, they recommend changing the transmission fluid on their performance models (M series) every service interval.

To add to this we recommend changing your transmission fluid if your vehicle is older than 10 years. This makes a noticeable difference to shifting and driving. Transmission problems can be tricky to diagnose and a misdiagnosis can result in a costly repair bill. So if you feel that your transmission is acting weirdly, why not pop in to Foreign Affairs Motorsport for some friendly BMW service?