Who Can I Trust To Repair My Rolls-Royce 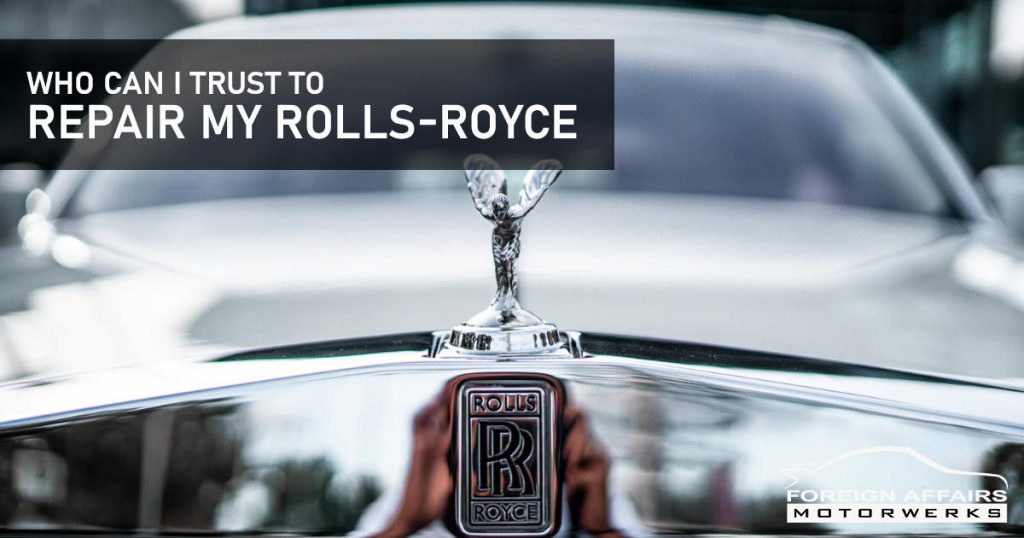 Reliable mechanics do not grow on trees. Finding a shop that you can trust is a challenge to even your vanilla Toyota driver (that is if you don’t want to go through the car dealerships or “stealers” as they are more commonly known). Shoddy workmanship ultimately creates many more problems than it solves; and cheaping-out on a repair can often lead to a much bigger problem further down the road (excuse the pun).

Good technicians go beyond the call of duty; for example when you bring your Rolls-Royce in for a service at Foreign Affairs Motorwerks, we will not only do everything covered in the necessary Inspection routine, but also advise you of any problems that may come up in the next couple of hundred miles. Prevention is much better than cure, as most auto enthusiasts realize when they are stranded at the side of Route 1.

I digress. A question often facing Rolls-Royce enthusiasts is who can I trust to repair my exotic auto? To understand this better we need to take a closer look at the company itself. Quintessentially British (old chap) Rolls-Royce was originally founded way back in 1904 by the partnership of renowned car salesman, Charles Rolls and engineer Henry Royce.

The motor industry was still in its infantile stages, and their partnership quickly got a name for luxurious and more importantly, reliable vehicles in an era where the horseless carriage was, temperamental, to say the least. This would have been a happily-ever after story, if it wasn’t for the minor inconvenience of two world wars with a dash of The Great Depression to bring out some extra flavor.

Fast forward about 40 years and we have unfortunately lost both of the original founders but have a company that is deeply respected in the aerospace, industrial power plant and of course, automotive industries. For a brief period during the 1920’s Rolls-Royce even had a U.S. plant in Springfield, Massachusetts building their iconic Silver Ghost.

Despite surviving the rocky first half of the 20th century, it was ultimately the design of a jet engine supplied to America’s Lockheed that in 1971 caused the company to shatter into smaller divisions, each owned by different companies. Initially Vickers bought the automotive side of Rolls-Royce but succumbed by selling to the ever-powerful Volkswagen Group, who, as of 2003 sold it to BMW. What it basically means is that the newest incarnations of the Spirit of Ecstasy are actually ‘German Technik’ under the skin.

According to Rolls-Royce, “The ticking of the clock should be the only thing that you hear.” For many years their defacto power plant was the V8 but in the newer BMW models you’ll find V12s of many different descriptions. Culminating with the 6.75 liter twin turbo found in the Phantom it is fair say that modern Rolls-Royce’s have effortless power. Their vehicles have always had presence and still represent the pinnacle of engineering advances; Rolls often chooses to license cutting edge technologies from other manufacturers. For example, the legendary hydro pneumatic suspension was originally licensed from Citroen and was a derivative of what they used in their infamous DS line. Automatic transmissions often came from GM (since they used to be on the pinnacle of shifter tech) and were capable of handling the huge torque output of Rolls-Royce power plants.

BMW sure are good at keeping the lid on their secret-sauce used in the modern autos, but if we could guess, most of the suspension is probably designed in house, with the gearing being licensed to Magna PT (formerly known as Getrag). The interior design is state of the art and their star gazer headlining is something we particularly love. What we can say though, is that their blend of 11 herbs and spices sure produces a vehicle quite unlike any other.

What all of this technology means is that they are no easy beast to service and maintain. Rolls-Royce are a classic blend of the old and new, and they need a shop to match. Foreign Affairs Motorwerks has over 100 years combined experience in foreign marques, and our familiarity with BMW systems allows us to truly understand these British icons. Rolls-Royce need routine servicing every 6,000 miles, but if something about your vehicle feels a little, off, feel free to pop into our Pompano Beach shop anytime for some friendly advice from our ASE certified team.