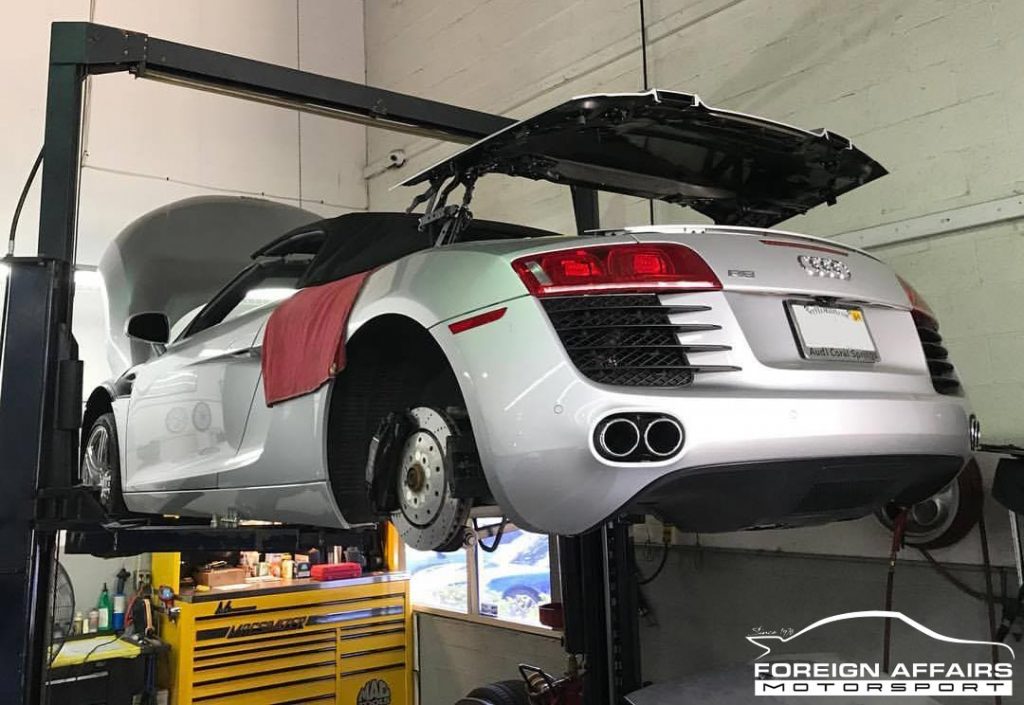 When test driving for a new car, you’re probably going to be paying a lot of attention to power output and delivery. For most motoring enthusiasts, the lack of a nice-to-have feature or slightly cramped interior space can be forgiven, but not a lack of firepower. Of course, after some years of ownership, you may also wish your car offered a bit more, and here’s where our Audi performance tuning workshop can help. Not every driver has the same wishes, which is why we can offer several ways to increase performance based on your specific needs.

Let’s get stuck into these 8 ideas for more speed!

We’ll start simple. This often-overlooked fix can really slow your car down, as blown or misfiring plugs means an inconsistent air-fuel mixture. Considering air and fuel are the essential ingredients to propel your vehicle, it’s worth getting your plugs checked.

Doing exactly what it says on the tin, an air intake adds oxygen to the fuel mix, helping to convert it all into energy and power. Aftermarket air intakes are less focused on aspects such as noise reduction and costs, so they’re designed with the single goal of increasing airflow. More air means a few extra horsepower can be freed up, along with the added benefit of better gas mileage.

Again, the focus here is on airflow, but where air intakes are about what’s going in, a performance exhaust can improve airflow following the combustion process, which also leads to better performance. Most factory exhausts use a “crush-bend” design, which slows the flow of exhaust gases. Performance systems feature smoother walls, allowing for a faster flow of gases. There are a wide variety of exhaust systems on offer for your Audi, such as the cast downpipe system from APR, one of our parts suppliers and a leader in Audi tuning.

Turbocharging Upgrades for Your Audi

A more complex job than air intakes or exhaust upgrades, turbocharging is highly effective at providing a power upgrade and increased performance by forcing compressed air into the engine. This upgrade can be especially useful on older, naturally aspirated Audi models, but it is also possible to upgrade a model which is already turbocharged.

Supercharging – Power Without the Lag

A supercharger also achieves high outputs but without the lag that is prevalent with a turbo. This is because, while a turbocharger is powered by the exhaust flow, a supercharger is driven by the engine’s crankshaft, which means the power is immediately available. Twin-charging can combine a turbo’s efficiency with a supercharger’s immediate power delivery.

Your newer Audi will of course have its own onboard computer controlling many of the vehicle’s processes, and this includes power delivery. Often, the standard settings are conservative as manufacturers aim for a balance between performance, efficiency, and reliability. A performance chip can be installed with more aggressive settings to release extra power and performance, without heavily compromising other areas of vehicle performance.

A different option is to leave your car’s mechanicals as they are and instead focus on weight-saving. This approach often goes together with bodywork modifications – our performance and styling department can provide ideas for lightweight materials such as carbon fiber or fiberglass. Wheels and tires can also hugely impact performance, while large body panels such as the hood can be replaced for noticeable weight savings.

By getting more gas into each cylinder, performance can also be increased. High-flow fuel pumps, gas lines with larger diameters, and larger fuel rails are just a few of the ways that your fuel system can contribute to better acceleration.

As you can tell, the sky is the limit when it comes to improving power delivery and performance from your Audi. Whether you use just one of these upgrades – or combine several – you can enjoy either a small or extreme boost in power. Of course, it’s in your best interest to get these upgrades done by a professional, so be sure to get in touch with our technicians to discuss the best plan for your ride!