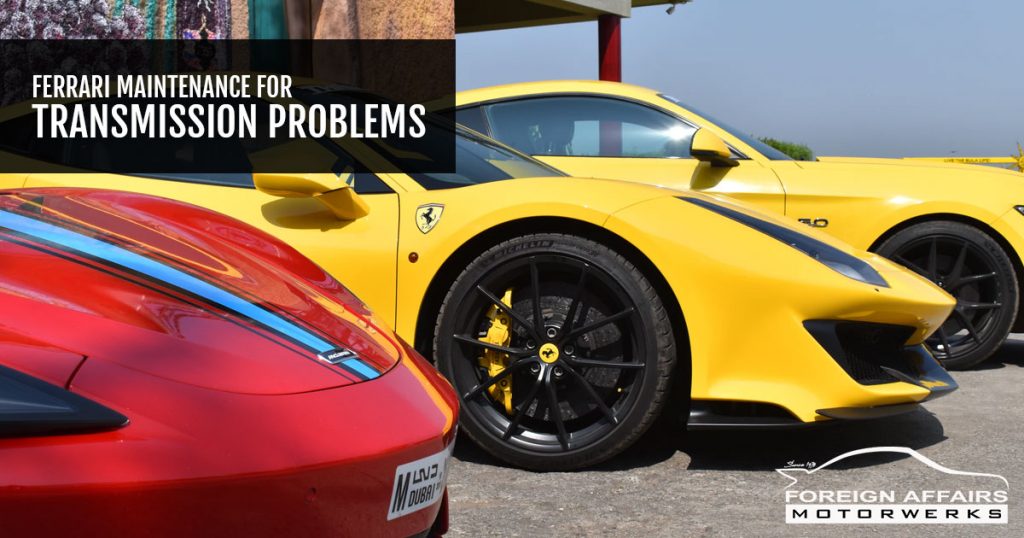 From the Enzo’s F1 inspired carbon-fiber body and carbon silicon carbide ceramic brakes, to the F430 Scuderia’s F1 transmission, and most recently the LaFerrari’s KERS inspired hybrid system, Ferrari has continued to make F1 technology available to the public. Unfortunately, much like Formula 1 cars, Ferrari maintenance is required to prevent parts from failing. The most common culprit for failures and issues? The transmission.

The most common issue we experience on Ferrari transmissions are on vehicles equipped with an F1 automatic transmission. With Ferrari more frequently offering this gearbox as the only transmission on newer vehicles, we don’t see this trend ending. The gearbox itself is built with the high standards you’d expect from a luxury automaker. But as with all cars, components fail with age. In the case of the F1 transmission, the transmission pump can fail or begin to leak.

When one of these issues occur, air can become trapped within the transmission, or lose the pressure required in the gearbox oil to change gears. The most common sign that your F1 transmission has failed is if you cannot select a gear, your Ferrari begins skipping gears, or you drop out of gear while driving.

In manual transmission cars, old gearbox oils can cause gears to stick, which makes shifting the transmission more difficult. Since Ferrari engines generate high amounts of horsepower and torque, a worn clutch is the most common culprit when your car fails to put down power or change gears. Cheaper clutches are never recommended on a Ferrari, as they are often not rated for high amounts of torque.

Some Ferrari owners have experienced issues on their cars that make them believe the transmission is failing, when in fact the problem lies in another area. For example, the 458 Italia has an issue where owners could not get their cars to shift out of park. This issue doesn’t lie with transmissions, but is rather the fault of the sensors that tell whether the hood or engine cover is closed. The sensors fail and continue to send an open signal, but don’t illuminate a warning on the dash. For the safety of the driver, the car prevents the gearbox from shifting into drive, as there is a risk of the hood opening while driving.

On older mid-engine Ferraris, engine mounts do wear out. When this happens, the engine can twist more than usual, which subsequently twists the gearbox, leading to difficulty shifting.

Have Your Ferrari Maintained By Professionals

It may seem obvious, but all Ferrari maintenance should be done by a certified Ferrari Mechanic. An experienced Ferrari Mechanic will know all about your Ferrari and its various quirks, such as the Ferrari 360 Spider having a service hatch behind the seats that allows easier maintenance of timing belts. Or the LaFerrari and Enzo, where the transaxle makes up an integral part of the car’s structure, and removing the gearbox requires the rear half of the car to be almost completely disassembled.

A certified Ferrari maintenance expert will also be aware of the correct fluids to be used, and be well versed in corresponding part codes, as many Ferrari parts can be found on Alfa Romeos and Maseratis. This lowers the wait time to acquire the parts.

As South Florida’s premier European auto repair, performance, and race facility, Foreign Affairs Motorwerks have repaired and maintained many Ferraris during our 42 years of operation. No matter what your prancing horse needs, our performance shop pro’s will ensure your Ferrari continues to perform the way it was intended.