The Most Common BMW Repairs 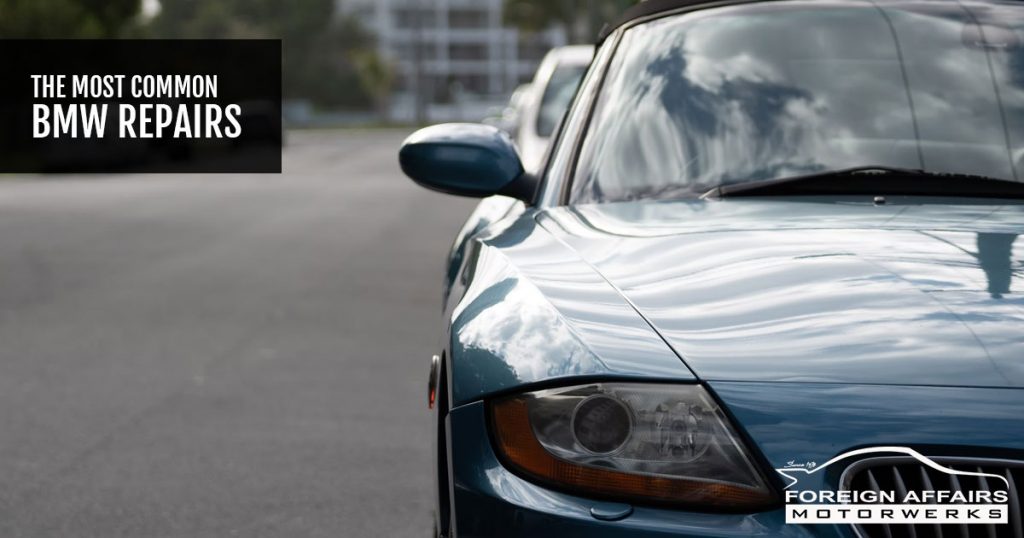 BMW is one of the car brands people either love or hate. It’s easy to see why BMW fans are so loyal to the brand, high-performance engines upfront, all the power going to the rear while offering the driver a cocoon of luxury and the highest quality of materials. For all the love BMWs get, there are just as many people who will be quick to remind you of the cost of maintaining and repairing a BMW. While we absolutely love BMWs, it only seemed fair to see what are the most common BMW repairs our performance shop sees.

You really can’t talk about BMWs without mentioning the issue that plagues all of their modern models. VANOS, which is BMW’s variable valve timing system, allows engine timing to be adjusted so that the engine can deliver both low-end torque and high-end horsepower. The problem is, that as an engine ages, the O-ring and solenoids can experience issues that cause the VANOS system to fail. With exposure to heat cycles and additives in your oil, the O-rings harden, shrink and crack. As for the solenoids, as your oil is used it collects dirt from within the engine that can block the solenoid, causing the failure.

Similar to the O-rings in the VANOS systems, the gaskets BMW uses are also prone to hardening, shrinking, and cracking. When the gasket used on either the oil pan, cylinder head, oil filter, and oil pump fails it creates a weak point that oil can escape from, especially when under pressure. The knock-on effect of an oil leak is if it is not addressed, either by replacing the damaged gasket or topping up oil levels, your engine can experience overheating issues or even seize completely.

BMW’s BST terminals are a safety device designed to disconnect the positive terminal of the battery when an accident is detected. Unfortunately, this system is super sensitive and is known to trigger with the slightest impact such as hitting a curb or going over a speed hump too quickly. When triggered the BST disconnects high current electronics such as the starter and alternator, but leaves the low current system, radio, interior lights, and gauge cluster connected. This makes diagnosing a triggered BST difficult, but if your BMW won’t turn over when you try to start and an SRS airbag light comes on, chances are the BST was triggered. While a BMW technician can reset the BST with a scanner. If the system has been triggered several times it may need the positive battery terminal to be replaced.

BMWs have their fair share of electrical problems but the prevalent seem to be with early versions of BMW’s iDrive system. All of the iDrive failures share a common culprit, the Car Communication Computer (CCC for short). There’s no need to panic at the sight of the word “computer” as the CCC is built into your car’s radio and is easily repairable. The most common culprit of a failed CCC is blown capacitors. While capacitors can be replaced, it does require a specialized auto electrician to repair the unit. The more common repair is to replace the CCC with a new one.

Less common failures are caused by either electrical components on the circuit board coming loose or drive issues. When components, such as the processor chip, display chip, or wire connectors break loose from the circuit board, the circuit is broken and the components no longer operate correctly. Components become loose by their pins breaking, the solder heating up and being displaced, or by sheer force. Just as with capacitors, an auto electrician can resolder and replace damaged components to repair your CCC.

Drive issues are caused by the drive the iDrive software is stored on failing, or the software itself becoming corrupt. In either case, pressing and holding down the DVD eject button, CD eject button, and volume button can force the CCC system to reset itself. If this doesn’t resolve the issue, a BMW technician will need to either replace the drive, reinstall the iDrive system or do both.

Foreign Affairs Motorwerks is South Florida’s premium automotive repair and race facility. With our fully equipped repair center and a team of performance shop professionals, we have seen and repaired every possible issue a BMW could have, as well as having built and modified some of the fastest BMWs out there. For all your automotive needs, feel free to contact Foreign Affairs Motorwerks at (954) 746-0488 or pop into our shop located in Pompano Beach.