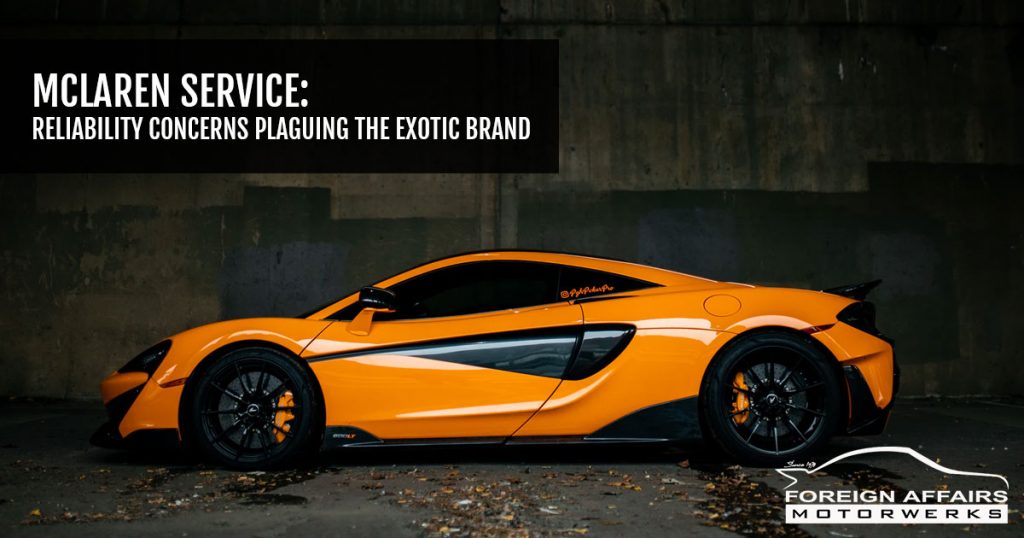 The problem with McLaren is that it is a niche brand. Very much like Maserati; it isn’t everyone’s cup of tea. The styling and interior are fairly unique and can sometimes be polarizing. It is definitely a vehicle with presence, harking back to its Formula One racing heritage. However, there is a popular perception that McLarens spend more time in the garage than on the road. At Foreign Affairs Motorwerks we often perform McLaren service, and, in this article, we are going to take a closer look at just how reliable they are.

This is purely because they are much more complex machines, squeezing every last vestige of power out of an inherently inefficient internal combustion engine design.

If you’ve ever wondered why Elon Musk is able to get such staggering performance figures for his vehicles, the reason is simple. An average internal combustion engine is about 40% efficient. That means less than half of the energy in the gasoline is getting to the wheels.

In comparison, an electric motor is 80% efficient, which means much less energy is wasted. So what? Well, to build a super car you need to be able to do a lot with a little, pushing that envelope of efficiency as close to the limit as is financially viable (and keeps the EPA guys happy).

To do this you need increasing layers of complex mechanical and electrical tech. The more intricate your engine becomes; the more demanding it is of regular maintenance. Finer modern engineering tolerances and careful simulations based calculations require synthetic oils, OE or reputable aftermarket filters and careful installation. The point we are making is simple; a McLaren is no less of a car than a Porsche or a Ferrari, so it requires the same level of care.

No auto manufacturer can account for every possible eventuality that occurs in the use of their vehicles.

Take the fiery Ford Escape for example. Problems do happen on the assembly line or during the design, which do ultimately come home to roost with the owner. The best advice we can give to anyone (not just prospective McLaren buyers) is to not be the early adopter (think guinea pig) of a new model.

McLaren’s 12C is a good example of this. There were a few issues such as cracked windshields with the early models, but most of these were fixed by the dealer under the factory warranty. If you are prepared to be a little patient, you’ll let others iron out the kinks for you and you might even get a better price for your purchase.

Fear Of The Unknown

To end at the beginning, McLaren is a not as well-known as Mercedes, Porsche or Ferrari. So, it is only natural that folks may have a little suspicion towards something that is foreign and new. Additionally, McLaren is a British brand and we all know that marques from the other side of the pond have a patchy history when it comes to reliability.

However, from our experience, there is really little difference between the reliability of a well maintained McLaren versus any other performance marque. From Foreign Affairs Motorwerks, we declare the myth, busted.

Does your super car need a tune-up? Foreign Affairs Motorwerks has been working on exotic marques since 1978, and there is nothing automotive related we haven’t seen or can’t fix. To learn more about our exclusive maintenance packages or to schedule an appointment, call us today at (954) 746-0488.