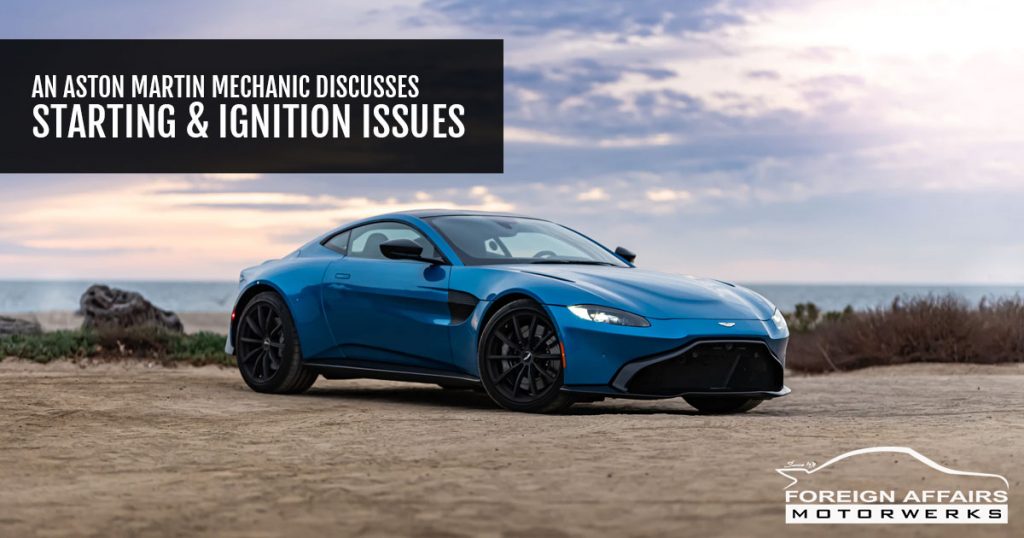 At Foreign Affairs Motorwerks, we love Aston Martin. Usually we hesitate to use ‘reliable’ and ‘performance vehicle’ in the same sentence; some other marques like, ahem, Ferrari, are tempestuous and temperamental while their Italo-German counterparts can also have their quirks. However, when it comes to the James Bond of the performance world, we have no reservations, old chap. Aston Martin’s (as exotic super cars go) are reliable. Even Sean Connery can have his off days though so lets take a look at some issues that may leave an Aston Martin mechanic scratching his head.

There is nothing worse than when you turn the key and your pride and joy fails to chooch. In this article, we are going to take a look at some common starting problems that Aston Martin experience, but even if you don’t own an Aston these simple checks can be applied to anything from a McLaren to your humble Chevy. (Disclaimer – untested on Tesla.)

Starting can be broken down into three main categories:

The obvious starting point (excuse the pun), would be, is there enough gas in the tank? Modern cars use electrical fuel pumps that are submerged in the tank and can often have a high and a low-pressure pump. Aston Martin cars are no different.

Electrical pumps do not like overheating and use the gas they are in to keep them cool. So, it is important to make sure that you have at least a quarter tank of gas to keep the pump happy. Usually a fuel pump will give notice before it fails – the auto will be jerky, run rough and sometimes fail to idle.

Despite this, there are occasions where they just fail outright. A sneaky test for this is to check if the pump pressurizes the fuel system before you turn the engine over. Get your Aston to the point just before you push the start button – i.e. dash lights on. At this point you should here a soft whine from the back of the car for a couple of seconds. Not all Astons will do this, so before ruling out any other suspects, read on.

If your Aston fails to even turn over, the first thing to check is the battery.

A completely dead battery is obvious; no warning lights will come on and the vehicle may not recognize the key. If the car has been sat a while, you might try disconnecting the battery and charging it, but a battery that dies one day to the next will most likely need to be replaced. Standard valve regulated lead acid batteries usually last about four years but finding the right replacement battery is something you should leave to your Aston Martin Mechanic, unless you are experienced with cars.

More common battery failures are partially discharged ones. What this means is that cabin lights and door locks will work but the motor won’t crank or else it will crank slowly. This could be a sign of a slowly dying battery, but if you’ve recently replaced it, the fault may lie with the alternator.

Corrosion on the battery terminals is also a serious issue since it can cause a poor connection to the battery or a short circuit. Both of these will drain the battery and could damage the onboard computer. A test is to buy a cheap multimeter and hook it up to the battery. Any reading above 12.7 volts should indicate a good battery.

So, you’ve got a fully charged or brand-new battery, but still no joy? Then your problem lies with the starter motor.

If you press start and are rewarded with a loud ‘clack’ followed by silence, congratulations, your Bond car has just gone into full stealth mode. A brisk whack to the side of the starter with a wrench may temporarily cure it, but ultimately the starter will need to be replaced.

3. The Ghost In The Machine

No, we’re not talking about Rolls Royce here. The final apex of the triangle is the ignition system. Non OE or old spark plugs may cause starting trouble as well as computer issues, dirty sensors or key code issues.

Start by checking the battery in the key fob. If that is alright, then make sure that the Aston Martin onboard computer isn’t displaying any error messages. If it is, or you are unsure, it’s best to take it into a shop to hook it up to a scanner. Sometimes, the key has got to be reprogrammed to the car before it will allow it to start again.

If you’re not as good with cars as James Bond is with women, don’t stress, just cruise into our Pompano Beach shop and we’ll give you that martini and stellar service!